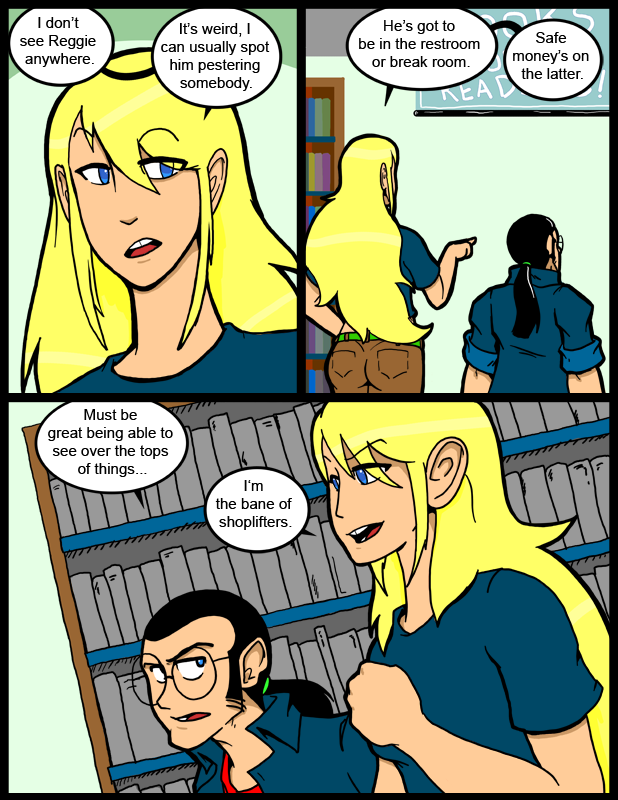 Had a dream about an immortal martial artist who was trying find out why he was immortal.  It was set in Greek, or Roman times.  The guy was being followed around by a tall blond guy who had a little pixie that followed him around.  The tall guy wasn’t friends with the fighter but was trying to find out about him.  The fighter kept beating up what were, essentially, zombies that came at him in great waves.  They were never able to advance far enough to put the tall guy in danger, and he never helped because the other guy was so fast he would just get in the way.  The fighter could be hurt, but nothing would kill him and he was badly scarred all over his body.  He could clearly feel pain too, but he was apparently almost immune to it when he was focused on a fight.  The dream ended as another wave of monsters set upon the hero while he was descending into a cave.

I’ve asked before, but how tall is Nina?

this fighter in your dream seems like one of the Immortals in Highlander, albeit a very old one.

So, you dreamt Berserk then? Only with more zombies and less horrific visages of hell.

Your dreams always sounds awesome, I wish I could have dreams like that.

She is the everlasting sentry. Only with boobs.

That last panel is fantastic. The different angle and the hand drawn bookshelf really make it pop!

Wait… blond guy with a pixie… not able to be killed… did you dream of the webcomic Atland?

@ psuedonymous & Bill M – I’m not familiar with either of those things, but I expect my description is too vague compared to what I actually dreamt. I’ll have to look at them and see though. X]

@ Axel – I think if you actually experienced my sleep states you might change your mind. XD

@ Erinovauch – He didn’t use swords though. Didn’t the highlanders have to use swords?

In the Highlander movies and the Highlanders television show, the immortals could only be killed by beheading. So, your immortal wouldn’t necessarily need a sword unless he needed to kill another immortal and gain their power in the process.

What always bothered me is, what happens when a mortal beheads an immortal?

The immortal would still die, although I’m not sure exactly what would happen to his Quickening without another immortal there to absorb it.

I completely love Nina’s ass there. Kudos on your ass-drawing skills.

Regarding the dream, “tall blond guy with a pixie following him around…” clearly your next dream will be Legend of Zelda slashfic.

“I knew I’d find the Master Sword in this cave, Immortal Fighter Guy, but I had no idea it would be in your loincloth!”

Man your lucky to have those dreams. I can’t remember my dreams. I have to be that creative during the day and that just ruins classes and work.

Whenever I remember how tall Nina is, I want to surpass her. Then I remember it’ll be even HARDER to find pants that fit than it already is, and I remain content.

Your dream would make an awesome story. Then again, most of them would. XD

I very rarely feel compelled to say this, but Nina? Dat ass.