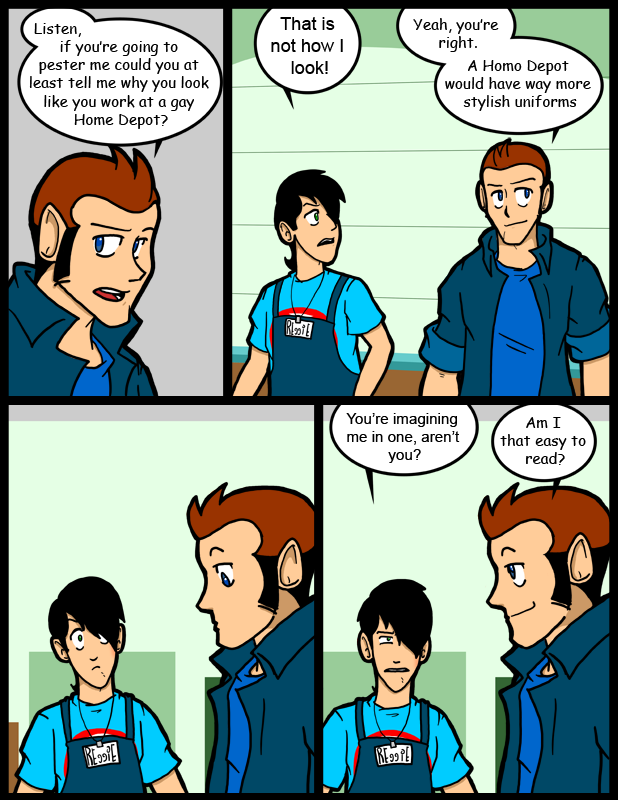 For the record, I’ve put a lot more thought into the idea of the Homo Depot than anyone should.  You should know, however, that it would be probably the most awesome place to shop for home improvement stuff OF ALL TIME.

Anyway, I don’t know how many of you do the Facebook.  I’m not really into it myself, but somebody made a group for Between Failures.  So join it if you like and do whatever it is people do in a Facebook group.  You can even stalk me, but be warned…  I’ll be REVERSE STALKING YOU!

I’m always late to the various fad things on the Internet, like Myspace, Twitter, and that.  Once everybody else moves on I’m usually still there long after it’s officially over.  My friends talked me in to Twitter and, of course, they barely use it now.  Some are on Facebook, but I never really got into Facebook.  Still, having pages on all the random fad sites is the done thing when you have a comic.  Everybody is kind of milling around hoping that someone, who has a lot of influence, will find their stuff and rocket them to fame.  And why not?  It’s not like it costs you anything other than time.

I like Twitter best because it’s fast to read and mostly people don’t spam it with annoying stuff.  I hate Myspace/Facebook ‘games’.  If ever you invite me to play one, no matter how much I like you, I’m not gonna.  I have scores of unfinished games that are GOOD that I don’t play.  Fuck Farmville.

Myspace has gotten so bad I hardly ever log in anymore.  It’s choked by so much crap even on a good day it has trouble loading.   At least with Facebook you get maybe the one ad and it loads pretty fast.  The built in chat thing startles me though.  Honsetly I don’t know how to use social networking stuff to my advantage.  I think it works better if you have a thing you sell.  Some dude who sells random Japanese crap added me on twitter and I started following him because the stuff he sells is interesting.  Then I was like, ‘Oh, so that’s how Twitter is supposed to work…”.

Fuck Farmville?! You have insulted me and my baby ducks good sir!

@H2O – Those baby ducks are made of lies! LIES! XD

Totally agreed on the Farmville stuff =/ I block that stuff faster than the eye can see.

I would be depressed at Homo Depot because all the hot men would be gay.

Well, expectations can be defied. Some could be bi, or just faking homosexuality to qualify for a better job than they could by other means. =)
…oh no. This is what optimism feels like. I should sleep…

I worked at a home depot in Tulsa, and as far as I knew we had 1 gay employee.

It’s a nice place to shop for shit, but the customer service is mixed, and management can be assholes sometimes.

I was into farmville mafia wars and vampire wars for awhile, but Harvest Moon 64 is a billion times better, so I’ll stick to that. (when I can afford a 64!) myspace is just too juvenile, I don’t even log in anymore.

I just joined the Facebook group. Only 35 there when I joined… wow. I originally joined because some Missionaries from my church were going down to work in Mexico and I could stay connected to them. I’ve gamed some there, made friends from other countries that like to play some of the same games I do.

One thing that made me pause was when it suggested friends that went to the same schools as me, I thought, “They avoided me like the plague then, why should I friend them now?”

I know it’s just Thomas’ wondering mind, but if I were Reggie I’d totally be taking that the wrong way. I mean, first he’s talking about stores full of gay men, and then he’s imagining Reggie in some mystery outfit…? Not that I have ANY problem with that, but Between Failures is just not what I read to get that fix :D
BTW maybe some fashionable males would get rid of all that orange, doesn’t home depot orange just make you wanna stab your eyes out with a fork??!

This is completely off topic, but is this still the 2nd day in the Between Failures Universe?

@ Erinovauch – To them time is passing normally. They don’t have to write and draw their lives. X]

Also, how the heck could you get bored in that universe? Sure, to us it take years for their days to pass, but imagine if each minute of your day was worthy of a page in a comic!

I posted on my face book and asked my friends to please stop sending me invites to those games. Now I get twice as many. Loves my friends.

Also Reggie’s face in the last panel is awesome.

Also are you going to Comic Con this summer? Have asked you that?

This page is just great. I love the timing and Reggie’s faces are hilarious.

This is page is hilarious!

Reggie seems to be more and more like Price Zuko… (Avatar:the last Airbender. The series, not the movie.) I think it may actually be giving him some charm to his personality. From a reader’s perspective, of course.