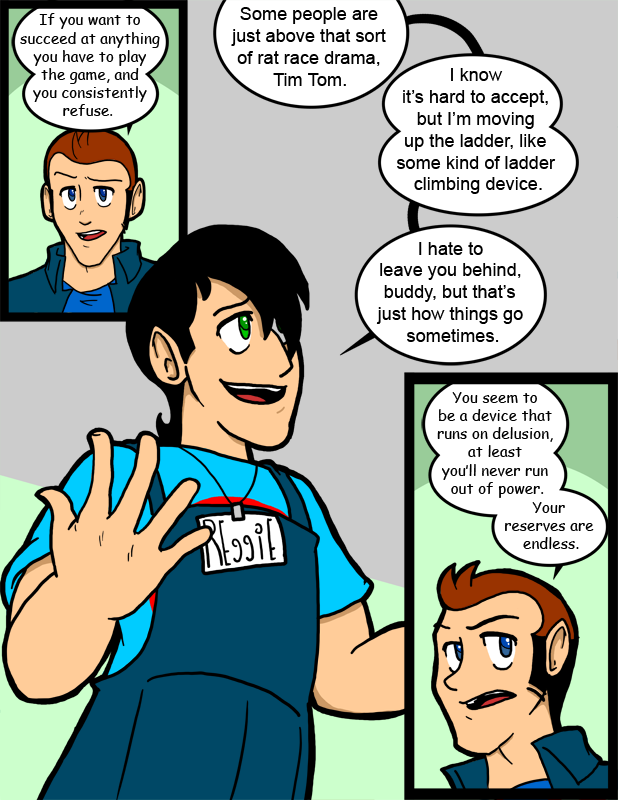 A few carefully chosen words about the Nintendo DSI:

A few less carefully chosen words about the Nintendo DSI:

I wasn’t sold on the DSI when I first heard about it.   I saw no need for a camera, let alone two.  The lack of a GBA port was sad, and the inclusion of an SD port seemed unnecessary.  I have learned things since then that have changed my opinion of most of these things.  The cameras can be used to make note of things when one is out and about in the world, as can the microphone.  Much more effeciant than me just trying to remember things.  The SD card can be used to store various kinds of data, such as music, which can be enjoyed in whatever manner a user sees fit.   Combined with the system memory the DSI can also store games purchased at an online store.  That is probably the best feature a DSI has.  It’s almost what handheld gamers have been asking for for quite some time.  You can take a selection of games with you without having to actually carry them around.  You can do the same thing with a PSP, and the selection of games is better, but you can hardly beat Nintendo’s pricing.  The games are sold like a data download should be; meaning cheaply.  Sure you can buy Little Big Planet for the PSP, but it’ll cost you the same as if you went to a store and bought it, which is utter bullshit.  Unfortunately not a lot of developers have jumped on the DSI download…  train?  The shovelware companies are there, ever eager to choke another market with their slipshod garbage, but a few gems are hidden amongst their number.  I have a few already.  I will speak of them.

I may have said it before, but I really love pinball.  The game that started me down this path was Kirby’s Pinball for the Gameboy.  After that came all the Pokemon Pinball games.  Then the tragic mistake that was Mario Pinball.  Nintendo rallied after that and gave unto me Metroid Prime Pinball, which was about as awesome as pinball is allowed to get.  That said, Pinball Pulse: The Ancients Beckon is a pretty solid game for it’s price.  It’s a single table, but a challenging one, without being cheap.  It’s probably my most played purchase.  It’s not really a big selling point, but the voice over is actually really well done.  The guy that does the voice of Zeus sounds a lot like Brian Blessed.  (If you don’t know who that is go online and find out.  He’s a fun dude.)

Dr. Mario Express is exactly what it claims to be.  In fact, it’s almost exactly the same as the original Gameboy Doctor Mario.  It’s cheap and has a versus mode though, so it’s a good choice for a portable library in any case.

Bomberman Blitz is basically the multiplayer game from any Bomberman game.  You can play a lot of people at once, and online, but the CPU is about as much fun when you’re trapped someplace.  It has a lot of options you can fiddle with.  Including some that I’ve been hoping for for quite some time.

The Art Style series is mostly crap as far as I can see, but Box Life is totally cool.  It sounds dumb when you try to describe it, so you’ll just have to trust me.  The premise is that you work in a factory and cut boxes out of a huge sheet of cardboard.  For some reason they drop explosives from the ceiling onto your workspace.  I assume this is because your overlords are bastards.  It’s never really explained.  There’s a puzzle mode and an endless sheet mode.  Both are neat.  The themesong is also pretty entertaining.

The company that produced the overlooked Gameboy classic Shantae came up with a game called Mighty Flip Champs.  You basically try to get from point A to point B by warping from dimension to dimension.  You can see where you’ll end up on the bottom screen when you ‘flip’ dimensions.  It’s a really simple premise, but the game itself is really hard.  Not from a control standpoint.  The puzzles are just very complicated and you have to think in multiple dimensions.  It can get a little frustrating, but a really solid puzzle game should be like that, if we’re honest.  It’s fun, but a challenge, like I said.

Lastly I downloaded a game called Dark Void Zero that just came out.  It’s three levels of an NES game that Capcom scrapped because the SNES was coming out.  It’s pretty old school, but really well done.  You get to have a jetpack with unlimited fuel, which should be selling point enough.  I mean who doesn’t want a jetpack?  Anyway it just bleeds Capcom.  If you play a lot of Capcom games you know what I mean.  It’s a little like a cross between Megaman and Bionic Commando…  with a fucking jetpack.  It plays just like an NES game should too.  Also, when you turn on the game, you have to ‘blow into the cartridge’ to get it to work, which is a nice touch.  I beat the first level, but that’s about as far as I can get right now.  The enemies get even more shooty in level two.

There’s a really cool program you can download for free as well.  It’s a simple animation program called Flipnote Studio.  You use it to make gif animations…  Which doesn’t sound as cool as it is.  You can draw with the stylus, so it feels more drawey than doing it on a computer.  Unless you have a tablet or whatever.  In any event you can do neat stuff with it and it’s free, so lay off it already.

In addition to all that stuff you can browse the web on it too.  Of course you can do that on other devices more suited to browsing, but it’s not a bad deal in a pinch if you can find an access point.  My comic is virtually unreadable on it unfortunately…

Seems like I had a point when I started writing this…  Well, anyway, you can take a bunch of games with you instead of one in the pak slot and a bunch in your pocket.  That right there makes the DSI pretty sweet.  If Nintendo can get some more cool games in their shop they’ll have a real winner on their hands.  If not I guess they’ll have a mediocre winner…  There isn’t a must have title in there yet.  Personally, I’d like Mother 3, if for no other reason than I want to play it on a Nintendo system and not a ROM…

It should be noted that Nintendo has already announced a newer version of the DSI that’s bigger than the regular.  I assume they did this because they found out I had one and wanted to dick me over.  In this they stay true to form as always…

Ha Ha Ha, Nintendo when will we learn? Whatever system you create you are going to slightly improve it a year later and rape us again.

I’m not sure where you stand on the piracy front, but it’s worth getting an Acekard 2i flash cart for the homebrew, even if you’re not looking to download the latest commercial games for free. I have no moral problems downloading NDS files for games I own, my DS got stolen a while back and I’d have lost all my games if I’d been carrying physical game carts with my console.

As it was, they got my DS and my R4 flashcart. Insurance replaced my old original DS with a shiny new (at the time) DS Lite, I had most of my savegames backed up (another benefit of flashcarts). The difference between an annoying situation and a seriously fucking annoying situation, I just bought another flashcard and I was good to go. There are easier to use and cheaper flashcarts but the Acekard 2i is the best. You might need to get a friend to flash it to support DSi firmware v1.4 but it’s worth it. Get an Acekard 2i (must be the 2i, the normal 2 doesn’t support the DSi) with a (class 4 or 6) 4GB SDHC card, get it loaded up with AKAIO 2.5.1 flashed to support v1.4, load it up with some homebrew and you’ll love it. :D Probably less than $20 shipped and an hour to get everything set up.

I used to supervise someone like Reggie. He was just barely competent at his job, and what work he did do tended to be slapdash. Add to that he was delusional. He seemed to think that he was all that and a bag of pretzels. He couldn’t understand why I was promoted over him, and he resented it. He let me know that on many occasions.

Then one day he made a pass at another worker. Correction, he made a pass at one of our clients. We were contractors; such behavior was explicitly forbidden. The entire contract could have been scrapped over this; that’s how serious this was. My project leader said that the final decision regarding this guy was mine. It was an easy decision to make, and the department ran much better without him. I hope that one day Reggie suffers the same fate.

@ CJ – I couldn’t find a reliable place to verify if it was really Blessed or not.

@ Nexy – I’m not sure I understood any of that, but I’m intrigued.

Sorry man, I geekasmed all over you blog. I technobable by default. :(

Normally DS games are stored on cartridges. Flash carts/cards are cartridges that you can load your own games onto. The current generation to games on MicroSD cards, smaller versions of the cards you use in digital cameras. MicroSD cards are also used in cell phones etc.

You can fit loads of games on a single MicroSD card.

You need a flashcart:
http://www.kaidomain.com/ProductDetails.aspx?ProductId=8693
(focalpoint and DealExtreme usually sell them cheaper but they’re sold out. Be careful, you need the Acekard 2i rather than the original Acekard 2, the ” i ” is important.)

A MicroSD card:
http://www.kaidomain.com/ProductDetails.aspx?ProductId=227
(Everywhere sells these though)

Follow the instructions here:
http://gbatemp.net/index.php?showtopic=154624
Follow the New Instructions on that page. Be careful because if your DSi is up to date you will need someone with a DS Lite to run the software on your Acekard 2i (in their DS Lite) to make it compatible with your DSi. That’s what the “Now you need to update your acekard 2i to work on the DSi 1.4 firmware (OPTIONAL)” bit is about. For you, it’s not optional, it’s required. ;)

Download some nds files and start playing! Playing pirated games is illegal, although if you own the game in a physical form then you’re just playing a backup which may not be illegal for you Yanks. Playing homebrew (DS apps\games that have been made by someone at home) is legal and fun for the whole family.

*your blog.
*The current generation store games on MicroSD cards

Damnit, I don’t get the option to edit my posts! :'( I proofread my post and everything, I still didn’t notice ’til I had submitted it. DRATS!

After reading the wikipedia article for Dark Void Zero, I have one thing to say. JT, please add to the gameplay section of the article, since you’ve played the game. All they included was the blowing on your cart bit, and that Jimmy Fallon is in it? What kind of article is that?!

@Emmet – I don’t know how to edit a Wiki actually.

@Dethfan – Well that’s what I get for skimming ad copy. XD