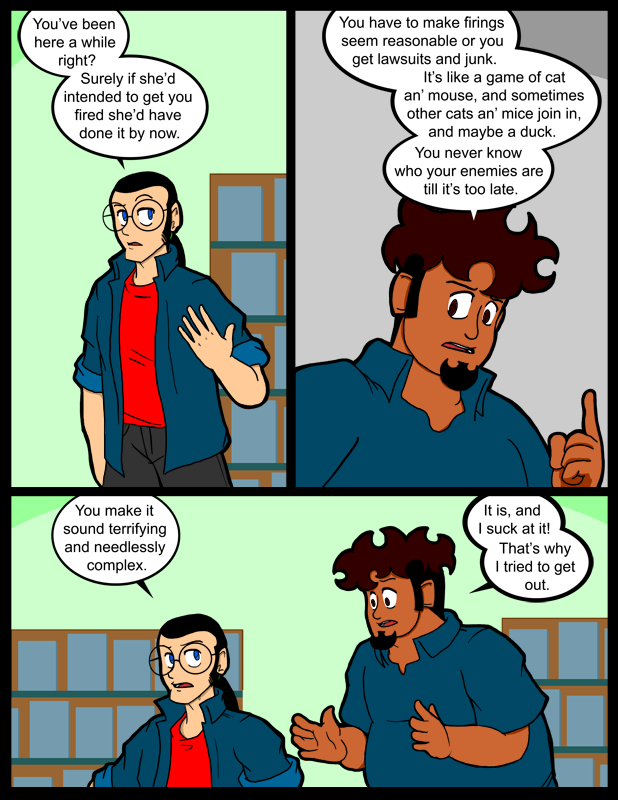 DeviantArt premium accounts have a polling feature.  I never bothered with it because I didn’t expect anyone would respond, but some of the people I watch kept making these boring polls, over and over, and I finally was like ‘shit, I can make up better questions than these…’.

Just like here the percentage of vocal people is fairly small, but they do have interesting opinions.  There’s also some overlap, so some of this is going to me OFN for them.  Anyway, I’m going to present to you the same questions and, rather than it being a poll, you can just respond however you like.  I’m going to present them in a more sensical order than I did originally.  Anyone who responded previously feel free to expand upon any thoughts you had.

What follows is the original poll question and my considered response:

Clarification: By ‘major flaw’ I mean something like bigotry, but what qualifies as major is up for debate.

I don’t know what it is in me that makes it hard for me to separate the artist and the art, but I generally can’t. I started thinking about this because I was reading an article about a famous artist and they mentioned, in passing, that he was a massive bigot. As soon as that info processed his work looked different to me. It was tinged by knowledge… This shouldn’t be taken as an argument against knowledge. For me it’s just a precaution. I know that if I find certain things out about a creator I may end up having to trash shelves full of books, and years of fandom, from not being able to distinguish between an artist and his, or her, work.

The article in question was about James McNeil Whistler, who painted an Arrangement In Grey And Black, commonly known as Whistler’s Mother.  He was an old school racist.  That was back in Civil War days for America.  He was living abroad at the time but, when it looked like the south was going to be beaten, his mother, a confederate, escaped to live with him.

Dude actually had a pretty wild life.  In fact, I guess he was friends with Oscar Wilde, until they got crossed purposes.  Wilde even modled the murdered artist in Dorian Gray after Whistler.  Of course when Wilde was outed that went over really well with Jimmy…

Anyway, that was just what got me thinking about this stuff.

I find that my enjoyment of an artist increases the more I know about them. It’s like some sort of creepy stalker thing where they become more and more precious. Until I find out that they think that gay people should be killed or even just witnessing the fallout of a public temper tantrum. Suddenly, I am embarrassed that I liked anything of theirs ever. I don’t want to be defending or supporting that sort of behavior.

Take Orson Scott Card. I love(d?) his original Enders series. I found his books on writing to be very inspiring. But I won’t be recommending him to my children. I can’t. Not with his stance on homosexuality. I just cannot condone it.

And on the opposite end of the spectrum, the more I find out about Neil Gaiman, the more I have to struggle to be fair to his works. I’m almost into pure fanboy territory, where he can do no wrong. Even that silly Marvel 1602 series… it was pretty bad and I bought it and shared it anyway.

Yeah, I get where you’re coming from, and I used to be like that, too.

I had to actually train myself to seperate the art and the artist, so that when I learn one of my favourite artists is a pedo, I don’t start hating the art.

It’s like hating a child because you hate the parent; the child’s done nothing wrong, in fact, they cannot control the circumstances surrounding their creation and who created them, so it’s not something that they should be judged for.

Same deal with art and artists.

Art should be judged on their own merits and flaws, not the ones their parents have.

I generally think there are two types of artists, either they tell a story, or they tell their life, or opinions. When we draw we want to express ourselves, which makes the comic biased towards ourselves. In some manner or another, this isn’t a general statement for all, just what I’ve noticed.

Usually our feelings, our experiences are reflected onto our main character. This is a very complicated topic, some people put everything that’s them into their character, others do not. Some even become the enemy, the antagonist, and make the hero what they would like to be.

If I find out my favorite artist is a racist or something it divides me, because I feel if I support his art by visiting his/her site or buying stuff, I’m just supporting the idea that racism is ‘OK’. I do not hate the art per-say but it makes it hard to enjoy the brilliance of their work.

Maybe. Depends upon how much enjoyment I got out of it. It’s like finding out a song about a wanting to get with a chick was written by a man who was picturing a kindergartener when he wrote it because he’s a pedophile, or finding out that an award-winning comic book writer is a hardcore communist. How much of the artist do you see seeping through the creation? Would me finding out you were a serial killer of clowns affect my enjoyment of your comic strip? No. But if I found out you hung out around video & music stores dealing crack to high-schoolers, it might. If, say, I found out you worked in a store’s management and were Reggie-like towards all your employees, sexually harassing the Carols of your staff, it would really dampen my enthusiasm to ever return to your website.

You just have to look at Michael Jackson, does someone’s impression from his various lawsuits and the facts they’ve revealed affect their appreciation of his music? Tom Cruise, when he jumped on Oprah’s couch, look at that. He’s a great actor, but many people were put off by it, avoiding his movies. Yes there’s a difference between an artist and his or her art, but that difference can be blurred with enough of an outrage.

Art is in the eye of the beholder… No matter what if the art is good art I will like it. Even if the facts about that person are disturbing, and maybe somewhat deranged in a way (possibly several). It is like that renouned artist who was infact so far in love with someone to go and chop of his own ear and send it to his beloved. Big deal good art. Yes I may not support all their beliefs or ways of thinking but art is plane art. There can not be any if’s and’s or but’s about it.

sorry if my gramma and/or spelling is bad im dyslexic ^^”

Depends on the flaw. finding out an artist is a drunk or strung out on meth would bother me, but not banish his work. finding out he was a pederast or a rapist would, I just could lend support in anyway.

As in music I could listen to Joplin (Janice, not Scott), knowing she was self destructive and likely to have a short life, but wouldn’t think of listening or reading anything that would support say Charlie Manson in any manner ($$). Listen to Wagner can do, even though he was an anti-semite, but that prejudice was so widespread at that time.

Guess that makes me a definite maybe.

I think the audience role in creating the art work provides an escape hatch for dividing the artist from the art. as rabbet said, it is in the eye of the beholder not just as a matter of taste but in terms of the work’s construction. Good christian folk of the day had no problem with Whistler’s prejudices and therefore no problem with his work. It’s only since we have become enlightened about the issue that we need even consider his bigotry as part of our position on Whistler’s work. The artist surrenders the creative role when he puts the work out there. After that, the audience is responsible for imbuing meaning. So Whistler’s Mum is not the same painting that Whistler painted and I can continue to enjoy it or not regardless of authorial intent or personality. Probably.

I’d have to say I agree about knowing more about the artist. I guess that’s because the art any given person makes is really a part of them, an expression of something in them. If I was to read something, then find out later that the author was, say, in the KKK or something, if I could make myself continue reading any of his work, I’d always be analyzing it for any sort of racism. Dude was a pedophile? No wonder he wrote all those books about innocent children falling in love with old guys 3 times their age. Then you start wondering just how much that person has acted on their particular flaw and it totally ruins any enjoyment you might have otherwise gleaned from their work.

And there was an artist @ DA that I used to watch that bothered me, too. I used to read the person’s journals (mostly from an artistic perspective), but the person was so full of anger and hate that it began to make ME angry (lol). That’s not a major flaw (seeing as the person wasn’t going around killing people in anger…I hope ^^; ), but it’s another good example. Another guy was a megalomaniac (among other things), so despite the fact that I really liked his artwork (he was quite skilled), it got to the point where I just couldn’t really see the beauty in it anymore.

Speaking of polling, I had a really good poll idea lined up (b4 I was given a Premium Account), but once I got it I totally forgot it and ended up asking a lame question. Then I asked one based on one of your comics, lol. I’ve got another good idea that I’ve been meaning to put up lately, too…

The duck is the one you really have to look out for.

Just like in my day job. It is almost impossible to fire anyone, no matter what they do.

As for artists with major flaws, I usually continue to enjoy their art, but stop giving them my money. I found out that one of my favorite authors was a horrible jerk and I just stopped buying his books. I still enjoyed his work and read his latest two by other means. I know that not purchasing a copy of a book is not going to hurt them in the bigger scheme of things (is a drop in a bucket) but at least it gives me the opportunity to make a statement, even if it is only to myself.

I try not to let it bother me… I recently read Rurouni Kenshin for the first time, and