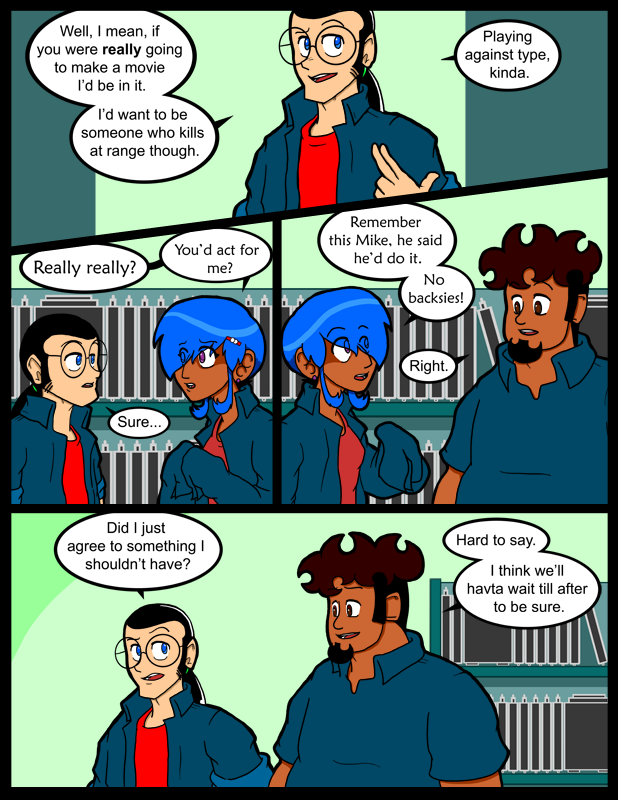 Looks like I’ll be in Garden on Tuesday.  It’s dentist related, so I don’t know what kind of visit it’s gonna be.  Hopefully I’ll be able to see some of you at the usual places.

In my search for Phoenix Wright 2 I ran across a copy of Spectral Souls for the PSP.  It was used, and super cheap, but I noticed it was a tactical RPG.  I didn’t get it, but I made note of it.  Later on I looked it up and found out about why it was so cheap, and so used.  Apparently it’s incredibly good, but plagued with load times so insane as to make it nearly intolerable.  The price was right though, and I went back a week or so later and picked it up.  Just as the reviews said the load times are crippling.  The game itself really does have some unique ideas for its type, it’s a shame the execution is so poor.  In any case I’ll probably come back to it when all other avenues for fun are exhausted.

Y’know. I just thought of this and was wondering. What time of the day is it at this point in the strip? They just opened a couple hours ago maybe? Most places open around 8-9ish?

It’s my bday tomorrow, give me a call if you’d like. I got you something at comic con.

been reading this comic for a while now, but this is my first comment…
This comic = <3<3<3<3 for me and all my friends :P
keep up the great work, and I love wisdom in some of it… us teens can actually leanr a thing or two from you/your comic :D

these last few pages seem to foreshadow something rather interesting, oh and more than 2 years and still only on the second day? man time is passing slowly

So, changed the title graphic huh?….not a lot of colour.

how could anyone say no to her anyways? she is made out of pure cute.

Regarding crippling loading times on select PSP games, you can cut back on such things significantly by using custom firmware, dumping UMD images onto the memory stick, and playing them directly off that instead. Not only does it decrease loading times, but it also uses less power and reduces wear-and-tear on the console…which raises the question as to why Sony doesn’t officially support the feature by now. I know many people who went rogue specifically for this convenience.

not only does sony not support it, it is piracy, illegal, and a serious crime which will get you more years in prison then rape in the USA

You’re being ever-so-slightly overly dramatic, taltamir. The method I listed is creating back-ups of your own personal copies for your own personal use. You can’t get fined for that, period, as it isn’t piracy. What I’m talking about might be sketchy in some people’s eyes, but it falls well within legal boundaries.

As long as I’m at it, in the case of personal software piracy, your chances of getting even a small fine are minimal, at best, given it may actually help boost a company’s net sales by promotion of their product. Cases where a business is doing it, however, or when someone is selling illegal copies, is where you can get the large penalties you speak of, and even then, prison time would only result if you or the business fails to pay the fine they’re given. It’s all about the money.