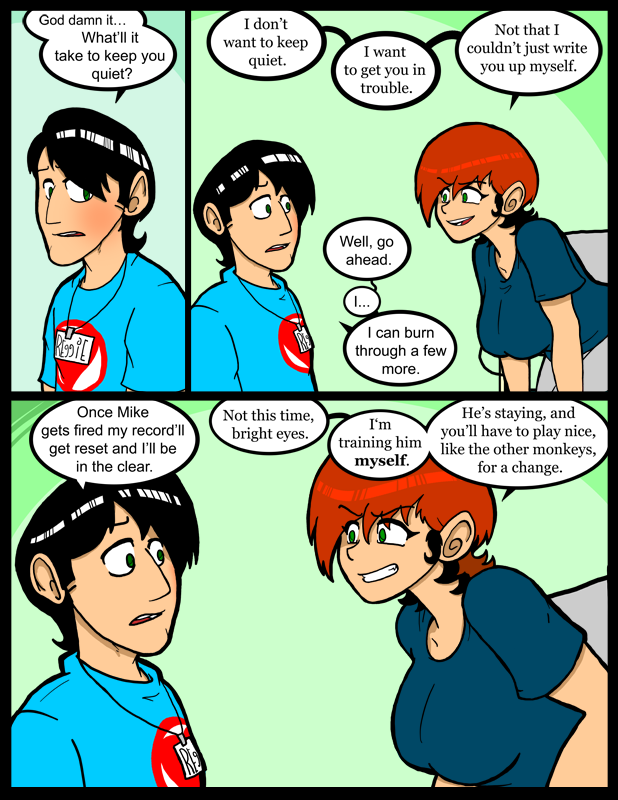 Firstly, I made a links page. It’s on the sidebar, on the right, where everything is… since I can’t get Comicpress to change without breaking the site. At the moment it’s written in old school html. I have a limited understanding of html, so I can still cobble pages out of it. It’s not pretty, but it works, which is more than I can say about Comicpress most of the time.

So I got to see a little more of Being Human.  I still wouldn’t call it a comedy.  I might go as far a black comedy, but it’s one of those shows that is hard to classify, so someone just picks a word and tries to make it stick.  There are funny bits, but there was just as much drama, if not more depending on how you look at things.  Categorize it how you will, in any event it’s not a bad show so far as I can tell.

Sometimes I write these things and then click the spellcheck and it finds no errors.  So I do it a few more time just to be sure because I can’t believe I managed to write a whole paragraph without making a mistake.

Does anyone remember Trace Memory for the DS?  I bought it on clearance years ago, but never played it.  I finally broke it out the other day.  In the game you carry around a device that looks exactly like an original DS.  It’s part of the story and sometimes the camera zooms in so that the game’s DS becomes yours.  A neat idea, excepting that I have a DS lite now and it doesn’t look like the massive block of gray plastic that was the first iteration.  It almost makes me want to play it on the old DS.  Then I turn it on and wonder how I ever played any game on the dim brick.

Im on my 3rd DS now, I had 2 different bricks, the original grey and then got the red one when I got Viewtiful Joe Double Trouble. Now I have a Black Lite with a personally made Umbrella Corp. logo right smack dab on top, It looks nice.

haha, Carol is really letting Reggie have it. XD her crazyness has no limits!

i loved Trace Memory one of my favorites

also is she climbing up on the counter?

Those Boobs, I cant take my eyes off her boobs.

ok that girl does scare me on occassion….

and lo, Carol did pounce upon reggie. and there was much rejoicing, for the time of come-up’ns was nigh

Man, I like the way her chest looks in these last two strips. Any chance of a nood carol?

…Damn that woman is frightening.

I can’t be positive with the word balloons obscuring the view, but I’m pretty sure Carol is growing horns in that last panel.

Damn. Carol’s getting really excited about this.

Here’s my general advice for lowering the number of mistakes you make while typing:
#1, learn to touch type. If you’re watching what’s going up on the screen then you are better able to notice mistakes than if you’re staring at the keys playing hunt’n’peck. There’s thousands of typing tutors available online, I can point you to free ones for Windows or Linux if you’re not sure where to start. Really, just half an hour a day with a decent tutor for two weeks is the foundation you’ll need to be able to find the keys, and then after that it’s just practice.
#2, read. Read lots, reading well-edited (so dead-tree, printed books, published as long ago as you can find interesting) text is a great guide to spellings, usable grammar and general style. Newer books are less well edited, and stuff online and newspapers are generally less well edited again than newer books.
#3, if it matters then read what you’ve written out loud to check it, or get someone else to read it. When you keep reading the same thing you have a strong tendency to find the same things you found the last time you looked at it and not much else; reading it a different way helps you see different things, and someone else will probably see different things again.

Is it me or does Carol look a little turned on in this?

Not so much at Reggie as at the situation and getting to turn the screw.

She’s the joy of my irony, the acidic spit of my cinism… I love this woman as words alone can’t describe.

Dim Brick? I still have nothing better than a non-backlit Gameboy Advance in terms of handhelds! That gives me an idea! If you don’t need your DS, you can give it to me! (kidding, unless you might actually consider it…)

Carol is being a bit of a slag here…

And o’course, due to the dual factor of Reggie being the target and her wearing of the gigaboobs, nobody is going to respond to it anything other than positively.

The reason I won’t support her here is that… unlike Reggie’s earlier dickery… it is obvious Carol is just being plain malicious. That really ain’t doing anyone any good.