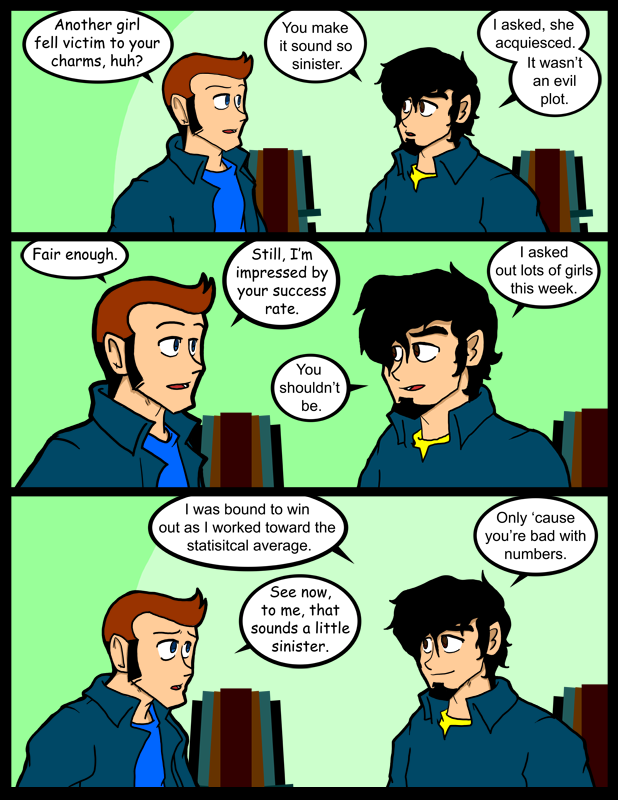 I’m sitting here, trying to think of something interesting to say, listening to Carl Sagan explain the Doppler effect.  Sagan could explain nearly any mundane thing and make it interesting to me.  I don’t really know much about him apart from what you could learn from watching Cosmos.  Sometimes it’s better not knowing every detail about the people who make your lives better.  Sometimes you can ruin things you enjoy.  Which is not to say you shouldn’t, but it’s important to understand the potential danger.

It’s kind of like Micheal Jackson.  I have a hard time enjoying his music now.  Not that I enjoyed it particularly at any point in time…  It’s just that all the allegations, and strangeness, color my opinion of him, and by extension, his music.  Well, the strangeness I can deal with.  It’s the other stuff that makes me uneasy.  You can own as many chimps as you like, so long as you keep them well.  Molesting kids, not so much.  I’m not saying I believe the allegations.  I’m just saying that the fact that they are there bothers me, and basically ruins Jackson for me.

Anyway, knowing too much can ruin anything.  Which is why I hesitate to talk about myself, especially in my less than lucid moments.  I’d hate to ruin my work for others by pulling open the curtain to reveal the little old man at the controls. (Wizard Of Oz reference.  I’m not a little old man…)  I try to keep a certain level of superficiality in the stuff I write.  I do not lead an epic life, so the trivialities are all I have.  It’s hard to decide how much to reveal, how deep to sink the shovel.

I’ve forgotten about it for, I don’t know, weeks now, but I did another interview.  I’ll pretty much do interviews with anyone who asks.  If nothing else they left me a nice note on  the WCL.  Click here to read even more of my words.

Scroll down to the Libel dispute with Carl Sagan. It explains it just about as well as I can.

But it’s definitely better to talk about that tiny little spat than the many books he published that are still being republished. Definitely more important than the way he electrified an entire generation. Talk about his Apple dispute instead, yeah.

I think what Bill was trying to say was that when you hear something bad about someone, it can make you wonder what else might be amiss with them. Over time, that can result in a reaction similar to the one he has about Michael Jackson. I don’t think he was singling out Sagan.

Sagan was a genius, and an excellent teacher. He was also a very good spokesman for science in general, and a harsh critic of pseudo-science. We certainly could use one of those right now, given how during the Bush administration, respect for science went into the sewers.

But… I met Sagan once. I used to live near Ithaca, NY, where he taught at Cornell University, and I worked for a summer at the University book store, where I encountered him a few times. The man was a pedantic egomaniac with a borderline hatred of anything that wasn’t hard science, and an impatient contempt for anyone that wasn’t as smart as he was (which was most of the human race). If you’re going to dislike the man, dislike him for that. Not for his spat with Steve Jobs – another obnoxious egomaniac.

Sagan was, in person, an asshole. True geniuses often are. But that doesn’t change the fact that he *was* a genius, an excellent teacher, and an inspiring speaker. He’s generally remembered for the good things he said and did, and that’s fortunate. As Craig mentioned, his positive influence is still being felt, and probably will be for some years to come.

All aboard the Spaceship of the Imagination!

You reveal more about yourself than you think. Through your dreams, and especially through this comic. The idea is, to not reveal TOO MUCH. To the point where we can predict what you’re gonna do.

I already feel like I know you but you’re still a pretty mysterious guy.

Are you chewing peppermint gum right now? Not just one, but 2 and 1/2 pieces???

I wish my co-workers could banter like this. The usual retort is “Your FACE [whatever the subject happens to be at the moment]”

I think H2O wants to bum you

J.T. – That a natural reaction to prolonged exposure to me.

Interesting that you should mention MJ today of all days, since he died.

Just pointing that out. Also Carl Sagan is one of the most boring people on the planet. I had to watch his cosmos series like a thousand times in my high school career, by my senior year, I could quote him. He made me want to cry. I just thought you shoud know. lol

J.T. – Well, I like boring things that take too long. As evidenced by the comic I create. XD

The Jackson thing is an odd coincidence. I actually wrote this the day before he died. It went up at 10PM mountain time on the 23. It’s actually less amazing if you look at the formula for the probability of mentioning someone famous on the day before they die. I’ve got a link someplace…

It amuses me greatly that you explained the man-behind-the-curtain reference. But I guess kids nowadays might not get it right off, since that’s not the latest Disney flick.

Not that only kids read this, lol.

I agree that talking about yourself too much can have a negative impact on your work…I was completely turned off from all of Piers Anthony’s novels because of how much he talks about himself in the author’s notes. But so far, everything you’ve revealed about yourself has just served to make you a more interesting, engaging author :)

Does he not know that numbers are sinister? There is a high correlation between the amount of numbers one is involved with and the amount of evil things one does. Mostly the relation is that they both are counted using numbers.

My theory on Michael Jackson is kinda weird, but it makes a lot of sense when you look at all the facts.
1. His father was abusive and only saw his kids as a way to make money.
2. The Jackson 5 was successful because they had a boy soprano.
3. Boy sopranos stop being boy sopranos when their testicles mature.
Conclusion, MJ got castrated, probably by some underground doc.
Why does he like to play with kids? He is one.
What identifying feature did that one boy see that MJ didn’t want in court? Lack of testes.
Why did his voice never change? See above.
Why is me mentally kinda F’d up? See all of the above.

Reading your post, I find myself unable to recall ever seeing Michael Jackson with even a hint of a beard. I know I wasn’t really paying attention to him much, he had a certain amount of control over when his picture was taken, and there’s the rumor that he had electrolysis so that he didn’t need to shave, but even if that’s true, there would’ve been some time between when he matured and when he had enough money from his singing to be able to afford that, and there was quite a lot of interest in him during that time.

On the flip side, most castrados have weight problems, and he did not, as far as I am aware. That said, ‘most’, not ‘all’. Kind of like ‘most men in my family have a beer belly by the age of 30.’ I’m 46, and I only barely have enough of a gut that I don’t have a six pack. One of my brothers is also entirely missing the beer belly trait, and the other two at least got to 40 without it, and still don’t have much of one, despite me being the youngest.

The Boomhauer method of dating.