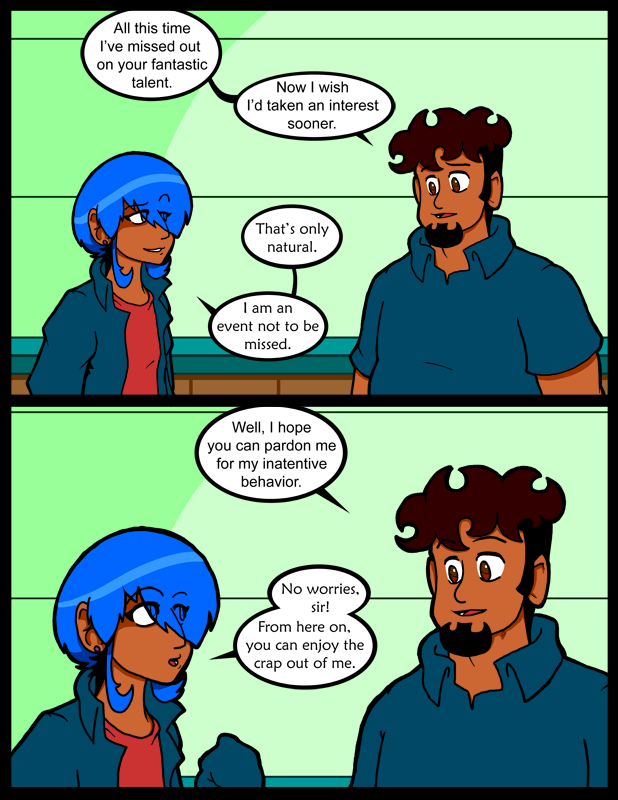 A positive attitude is getting very, very, hard to maintain.  My PC will no longer connect to the network.  Why?  I have no idea.  It just stopped.  I would still be operating under the impression that the internet was just down had I not turned on the Nintendo earlier.  I’m on my lappy at the moment, in case you’re wondering.

God, what should I even talk about that I won’t let deteriorate into a Baaaaawwwwfest?

I made mention on Twitter of an unspoken rule (now spoken of ) that says I am not allowed to tinker with devices made after a certain point in time.  If you give me a broken Nintendo, for example, there’s a fair chance that I can use my limited knowledge to repair it.  VCRs, older stereos, cars, that sort of thing I can mostly fix using my basic knowledge of electronics.  Anything DVD or onward, not so much.  I used to be able to get a CD player working in a pinch, but now even the cheap ones are beyond me now.  Shit, a person used to be able to rewire headphones when they went south, but not anymore.  I can’t even find guides online on how to repair them.  At $20 a shot I think it’s worth trying to salvage a pair of good headphones, but I just can’t anymore.  I have a little graveyard of parts in case I ever learn the magic secrets of new style headphone repair.  My favorite style, that they don’t make anymore, is in a box, waiting for me to breathe life into it again.  Technology has advanced to a point where a regular guy can’t save money by being handy.  You need a fair amount of technical knowledge to fix even minor things.  Which sucks because if money gets tight, and your car breaks down, you’re just fucked.  My truck sits on the edge of the divide.  I can repair a few things myself, but the electronics are a mystery.  The last time they went bad I had to take it to a guy, and he did a shitty job, if we’re honest.  If I had time I could learn to do it myself, and I’d do a good job; but who has the time to learn, essentially, a new trade just to fix a dashboard light, or a turn signal?  Nobody I know.

This is the stuff my grandpa tried to explain to me years ago, but I was too busy being a little emo shit to take any wisdom away with me…  I guess I must have heard it, since I seem to be able to parrot it though.

Anyway, the long and the short of it is that I’m not supposed to touch the innards of things, because even though I know I don’t know what I’m doing once I get inside something I will just charge ahead in the name of science.  Of course scientific curiosity doesn’t replace your mother’s DVD player when you take apart the laser housing and can’t remember the order things came apart.  It surely won’t bring back a dead PC that has all your comic images inside it.  So I’m supposed to keep my hands to myself.

Helpful thing with my car being dangerously close to crap, my dad being an engineer with Chysler. (Also been a stressful thing lately, but this is your Baaaaaw space, not mine). This is why I was able to replace the starter over the weekend for the cost of a rebuilt one (around $70) instead of $300+ at a garage, So yes, knowledge is power. Sadly, my knowledge is through someone else and I just try to not mess up the process.

PC network connection issues… Yea, not idea. That was something we called in a favor for. The most basic thing I can think of would be a setting got fudged or the network card died, but I’m not there messing with it… and I would probably just call a friend anyway. Well, if nothing else, back up those comic files on some DVDs, the laptop, and an external hard drive before trying to mess with the insides. And might be a good idea to do so in general just in case.

I hope you can find out what’s wrong and someone can fix things for you. I’d hate for you to lose all your art.

I have to point out an inaccuracy in your storyline….a store like that would take Brooksie, with her insane movie knowledge, and have her work in books. And Nina would work in music or software due to her knowledge of books. Man, that’s a “Titanic” or “Twister” style mistake.

It helps that Thomas pulls strings like a boss.

Regarding computer woes: Have you tried downloading a couple boot-CD (or boot-DVD) Linux distros? I’m familiar with specifically Knoppix but there should be at least one you can find that’s good for plugging into your system to diagnose your hardware faults.
It’s an unfortunately underknown (or at least underappreciated) fact that the driver-pile in Windows and the rest of the guts of the Microsoft operating systems are always pushed out with bugs in them. Checking under different software could help you clear the air of any contributing misconfigurations or errors in the software you’re using.
If you’re already doing this on GIMP running on Jaunty Jackalope, then please excuse me for underestimating your LAMP-Fu.

I suppose the first question I gotta ask, is: Are you using a Wireless Card or just connecting with an Ethernet Cable?

So am I the only one seeing a little somethin somethin between Mike and Brooksie here?

my first question has to be the same as J.H.’s how are you connecting

go to http://www.make.com and buy a catologue if they can teach me to wire and build my own solar panels they can help you modernize your electrical board knowledge. if that doesn’t work then and only then are you hopeless

Oh… my … God… I just discovered the comments button at the bottom of the page. I’m officially retarded now. You know how I’ve been commenting? Huh? Going back a page and then going forward a page to find this little box at the bottom. True story. Yeah. My ignorance is legendary. Mythic, even.

On another note: “enjoy the crap out of me” = win

Manekochan you have been reading this comic longer than I have, and you just saw the comment button? Thats just sad dude.

Talk about offering yourself to someone…

Recovering the contents of hard drives is what backups are for. What they usually don’t tell you about backups, though, is that you have to have more then one of them and you have to test them from time to time. If one goes bad, it’s important to have another. As for USB sticks and SD cards, I’ve found they’re not all that reliable for long-term storage.