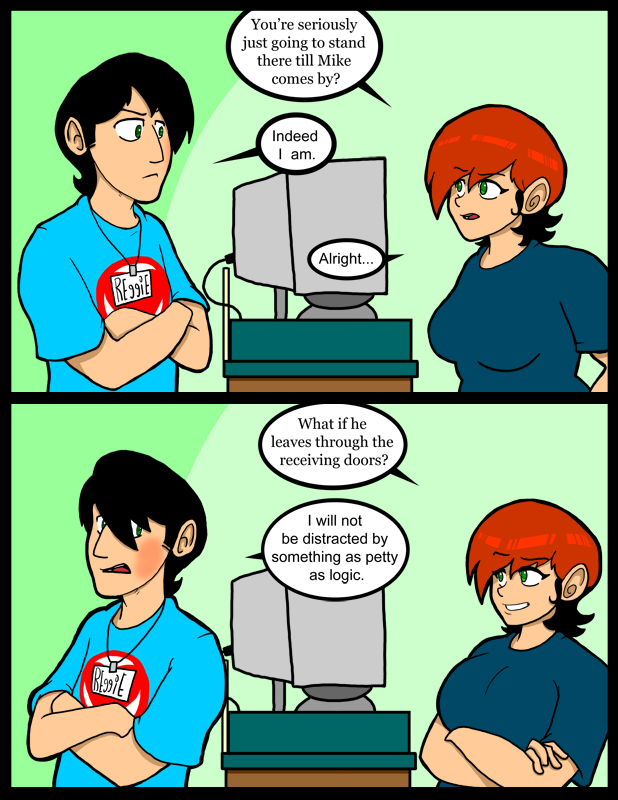 Logic really isn’t something that dissuades the average person.  In some ways the ability to ignore logic is a strength.  Mostly it’s just annoying…

I’ve got to go to Garden tomorrow.  Which will be today when this page goes up.  I hope the weather is clemment.  Seems like there’s been a lot of storms in Kansas this week.  Also ignorance…  I’m more prepared to cope with the storms.

I keep seeing people talking about Sims 3.  I used to play the first version.  I wanted a big house with a graveyard in the back, like those really old ones from long ago when you used to bury kin in the yard.  So I’d lure over all the neighbors then conspire to make them expire.  Which was cool because it resulted, eventually, in a haunted mansion.  Some people might not know this, but if you keep the remains of a Sim sometimes, at midnight, they will return from the grave to once again walk among the living.

I hope you can do something like that in the new game.

You can actually have entire households be made up of ghosts, or just have a few ghosts living around. Although from what I hear you have to control them and they eat and such like normal people…so I don’t know what’s actually ghost-like about them, other than they freak out some people.

Logic is the reason we thought the earth was flat.

Is that so? I’ve always thought it was logic that helped overcome that belief.

Logic? Ignorance of seafaring 100: When you’re out on the open ocean you can see the curve of the horizon.

wait wait wait…youre in KANSAS? no way! i live in OP!

Garden as in the usual?

Haven’t had the game long enough to know what the ghosts do… Will report back when informed. *Salute*

logic…. ya i don’t think i know that one… neither does life aparently…

I, uh, “borrowed” the first Sims game for awhile, then bought the Sims 2 (which I have all the expansion packs for, as well as a few “Stuff” packs and a ton of custom content). As a step up from the first game, 2 lets you leave your house and go places (to community lots, downtown, secret lots, specialty lots, and even on vacation). But you have to either “walk” there (loading screen), or call a cab or drive (more loading screens). In the Sims 3, you can apparently walk right out your front door and down the street. In theory (at least; I don’t know for sure), you could go over to your neighbor’s house and knock on the door. I’ve always wanted to do that (in the game, lol).

Oh, yeah, and ghosts in the first and second games seem to behave mostly the same. I can’t remember details, though, since I didn’t experiment too much with them in either. The last two deadies I played with caused too much trouble for the rest of the household, so I had to boot them out, lol.

Oh, and you’re right: sadly, logic often is not enough to convince someone of something, even if said logic is spot on, and the person is of reasonable to notable intelligence.

If she needs to get rid of the douche she should jsut rip a massiv efart, or save that joke till all four of the main cast is in a car that’d be hilarious.

Holy guacamole, Batman… a fellow Kansan. I’m in Hutch myself…

Wow……. I just realized Kansas is the one place I’ve never been to in the continental U.S.
Oh, well. I’ll put it on my road trip list.

wow kansas, I have an aunt and uncle who live there