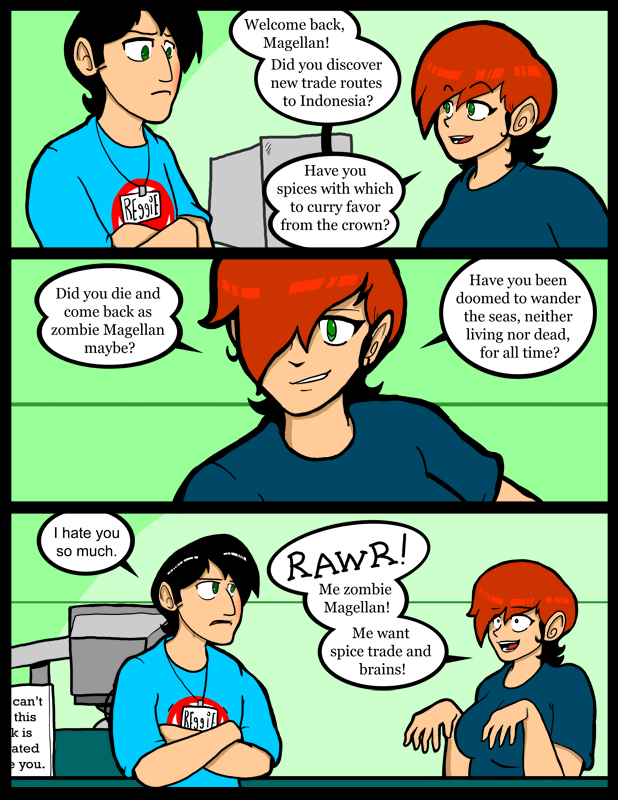 Today for you I give bonus fiction.

His face didn’t have much structure left. It was mostly a solid bruise with enough definition to be identified as human. The rest of his body was pretty much the same. Mangled, but not torn open anywhere. Derek slid the sheet back over the corpse.

“Hell of a way to go.” He said flatly. “Massaged to death.” He looked at the attendant, who was trying his best to avoid seeing the dead man. “Up till now that was on my list of top ten ways I wanted to die.”

“Perhaps a revision is in order, sir.” The attendant replied sickly. Derek took another look at the body.

Derek wiped his hands up and down on his trench coat, trying desperately to get the gross off, while simultaneously attempting to look as though he didn’t care. His clothes were obviously clean, but looked as though he’d bought them from a detective cliché outlet. Plus, the precisely controlled motion was making the cybernetic joints in his right arm ache.

Across the room a young woman was carefully resealing the access panel on the massage robot’s cranial cavity. She was dressed in a faded hoodie, and jeans torn at the knees, which looked like they’d come from a yard sale. The overall drabness of her attire served only to accentuate her bright red hair. A loud snap of latex gloves coming off drew Derek’s attention her way. She looked over her glasses at him, grimly.

“Whoever did this was good.” She stated. “I’m not surprised nobody found anything.”

“Couldn’t find anything either?” He asked. She walked over and offered up a cable from her Mincom.

“Nobody’s that good.” She smirked.

A slight jolt of pain ran up Derek’s arm, up to his optic implant, as the HUD initialized. The wiring was beginning to wear out. It was rapidly moving up the list of things to fix, once the money from this case came in. He winced as the HUD overlaid a list of directory files on the blue box now hovering in his field of vision. Lilly was right, this was expert work. He never would have spotted it himself. Most of the main commands were wiped, but parts of a few subcommands lingered in the update registry. It wasn’t much, but it was a start.

The attendant fidgeted. Proximity to a dead body was making him jittery.

“Why are you here anyway?” He asked, trying to take his mind off the corpse with small talk. “The police down loaded a copy of the robot’s neural net already.”

“We’re not with the police.” Derek stated dryly. “We work for JetCyber Robotic’s insurance company. Our job is to make sure that JCR isn’t at fault for any deaths connected with their robots.”

The attendant gave her an odd look, and nearly laughed in spite of himself. Derek rolled his eyes and made for the door. Trying to salvage his imagined air of coolness.

“We’ll show ourselves out.” He said, waving a hand over his shoulder. Lilly grinned at the man and trotted after Derek.

“I really wish you’d stop calling us that in front of people.” He said, once they were well out of earshot. “You realize it has two meanings, don’t you.” She thought about it for a second.

“Whatever,” She chirped. “alliteration is always cool.”

I like the snipit of story to, keep it up.

I like the textual story! I hope you can expand on it– sounds pretty darn intriguing.

I’m pretty sure this is the first time those words have ever been uttered.

I’m liking the short story stuff like what’s above. You’ve got a knack for writing intriguing and interesting things that grab people’s attention. I would know since my writing comes off as flat and boring. =P

You can find what it says at one of the earlier comics, the first one that Carol appears in I think.

“Me want spice trade and brains!” XD Best Quote Ever

I want a forum avatar of that! LOL