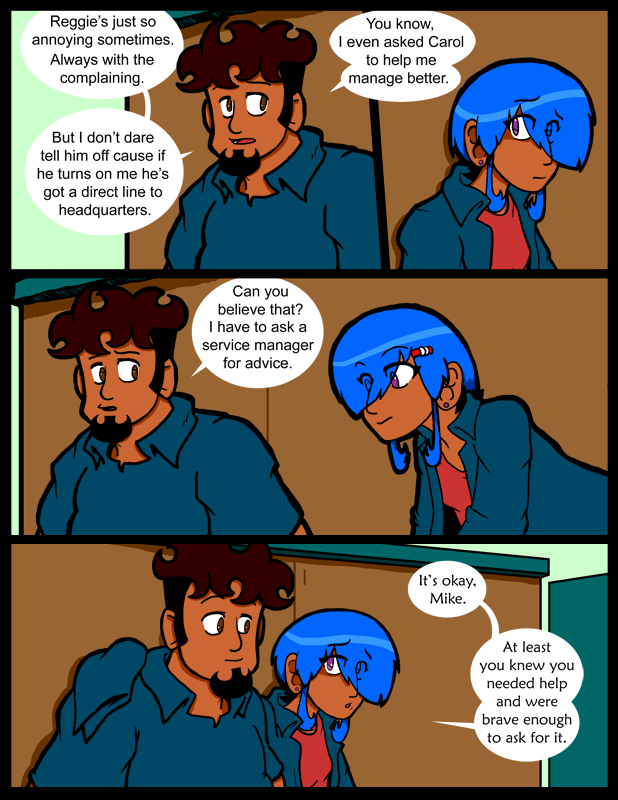 Man, I have set out to write several things here, then deleted it all for being too banal.  I don’t know why I’m overthinking it so much.  I traffic nearly exclusively in banality.  If it was a problem then no one would be reading this, or the comic.  Perhaps I simply need to embrace the trite nature of my posts.  Yes.  That is what I shall do.

I finally got a magical axe in Animal Crossing.  It’s a good thing too because I was just about at the end of my rope.  My desire to fell trees and remake the world according to my will was getting too great to contain.  Now my aspirations toward godhood will be sated.

I got Pokemon Platinum as an Easter present.  It’s actually a better play experience than Diamond.  My team consists of a Chimchar named Burnout, a Buizel called Torpedo, a Lopunny named Roulette, a Rotom called Geist, and a Psyduck called Glide.  I have no set sixth team member.  That place is reserved for a tool animal (I.E. one that knows hm moves for traveling.) or for pokemon eggs to hatch.  My team has some problems.  Mainly a pronounced weakness to electricity.  There are other issues as well, but I’ve been surprised at the versatility of a team not made up of powerhouse pokemon.  I’ve also begun to dabble in the fashion competition aspects of the game, which I have glossed over in every previous incarnation.  Surprisingly they have proven to be entertaining and challenging.  I was disappointed to learn that Platinum is not compatible with Pokemon Ranch for the Wii.

I’ve gotten fairly far along in Dead Rising.  Usually I don’t bother with the easy setting on games, but for once I decided to get a firm grasp of the mechanics before jumping into serious play.  I have to say it’s way more fun to just run amok, killing zombies with impunity, than having to pay attention to health, the well being of survivors, and cash.  I may just skip over the harder modes.  The only thing I really wanted to do was mess with the undead and, lets be honest, you don’t play most Capcom games for their well thought out plot.

there getting a bit close…

As the guy who is constantly making the sexual innuendo, pun, or joke; I will point out that not all workplace intimacy has to mean there is a sexual relationship brewing. Sometimes people need comfort that they are fine and a well place platonic hug can share that in a way that some have not the words to convey.

Of course, at some point Mike can always scream “Bad touchie! Bad touchie!” to let Jolene know that she’s gone too far and made him uncomfortable. Damn it. I made like a dozen sexual joke openings in this post. Urge to make lots of bad sex jokes rising.

give into the urge young one…. come to the dark side!

these characters need some hair consultation.

If by that, you mean someone to market their win to the hordes of emulators, then yes, they do.

Okay, Ed has now joined Nina in the the group of people that would be a source of comic relief finding Mike & Brooksie. While Nina is definitely interested in Ed, Ed and Brooksie seem like a better couple to me, especially since Brooksie took the initiative and asked Ed over to watch movies…

…and Nina didn’t? Seriously, if tackling someone to the floor isn’t “taking initiative”, then I don’t know what is.

This has more to do with your minor issue with Pokemon Platinum than anything worthwhile or relevant, but they’ve released a down-loadable expansion for Pokemon Ranch to give it compatibilty with Platinum in Japan a few months back, so I’d imagine a US release is not far behind.

I’m starting to warm up to Mike as a character.

Brooksie should totally steal his wallet.

You desscribe things that happen a lot, and do it in an idealised way so the mechanisms are exposed, and sometimes you give a sense of how it ought to be. How it could be if a few people stood up and did their part to make it that way.

Now don’t take yourself so seriously that it stops working.

That’s an incredible line there. I think I just teared up, actually…

is it me, or did Brooksie’s eyes change color?

If Mike was real, and I was in his vicinity, I’d pat him on the shoulder.