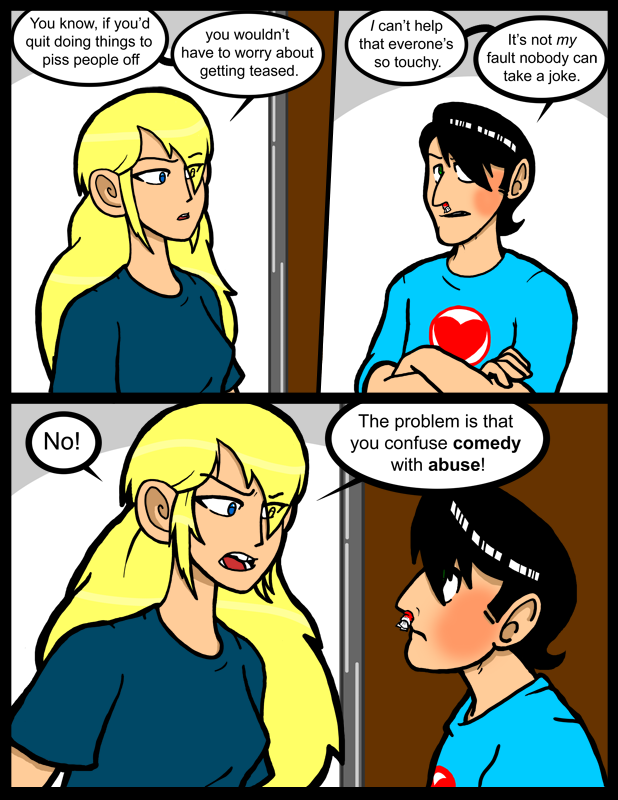 The Tater finally convinced me to get a twitter account.  https://twitter.com/betweenfailures  Follow me if you dare.  He seems to think it will help advertise the comic.  I have my doubts.  Let’s see who wins.  I haven’t learned how to use it yet, so don’t be mad if you say something and I don’t react.  I may not know how…

Okay, so the company that’s been going around making figures for various comics contacted me the other day.  If I ever did do figures of the cast who would you want?  Like, what order should I release them?  Just for pretends, I mean.

I’m going to hazard a guess and say Jolene would win such a contest.  What say you?

If I was just going to make the figure I wanted first it would be Carol, by the way.  Not exactly a revelation, but there you go.

there is a big difference

And I’m rather disappointed he just sees it as joking.
At least when I’m a dick, it is 50% because I just don’t give a toss, and 50% because I wanna see how easy it is to manipulate simpletons. Tryin to play it down as humour just comes across as distinctly oblivious.

Brooksie for me also

Save Brooksie for a release just before Thomas. I think that you should release them in the reverse order that they gained employment. i.e. start with ED and work your way back. Just a thought.

Brooksie would definitely win such a contest. I think all of the ladies would be fair competition for first release though. I suddenly want to make tiny busts of all the characters and have them live on top of my monitor.

Carol would be my first pick for your first figure, followed by Thomas, of course.

Brooksie all the way

I think you should go straight into late night cartoons for adults. (Seriously!) I’d watch. Your show would be great!

…Though I’d probably buy figurines of all the cast, could I afford it.

For me, Brooksie would be my top choice, because female ninjas rock. Second, Carol, because I’m one of those white guys Sir Mix-a-lot mentioned in his most popular song. Third, Ed, because he’s my favorite male character, and only putting out female merchandisee skews the potential audience.

Brooksie would be a fun figure and she’d probably sell best. Me, I like the ass holes. I’d vote for Reggie. Especially cute, vulnerable, smacked in the face variant Reggie. :D

All your cookies are belong to us!
So, uh… yeah… that was me up there with the Reggie-love.

(because Firefox went retarded on me and lost everything so now sites that I have previously been logged in on, etc, have no idea who I am. Hence the anonymous post up there.)

i have to say brooksie first then nina then carol

Oh! if I could pick any one to be a figure, it would be classic Thomas! you know, with the trench coat and cap on backwards. I truly do, love this comic, I save up a couple of updates so I can read a little longer.

THIS IS BARTERTOWN! -Kicks Reggie into the convienent hole-

John… That would be a cool figure

Carol and Thomas should definitely come first. Then I’d say Nina and Brooksie, then John and Ed (and maybe his twins sister, b/c everyone knows twins are joined at the hip (no pun intended)). Reggie and Mike would probably come in last.

Brooksie and carol! My two cents anyway. Also I too have this problem occasionally. Nobody finds torture funny anymore, I swear it was a smash act during the inquisition.

Just make sure the couples fit together mechanically.