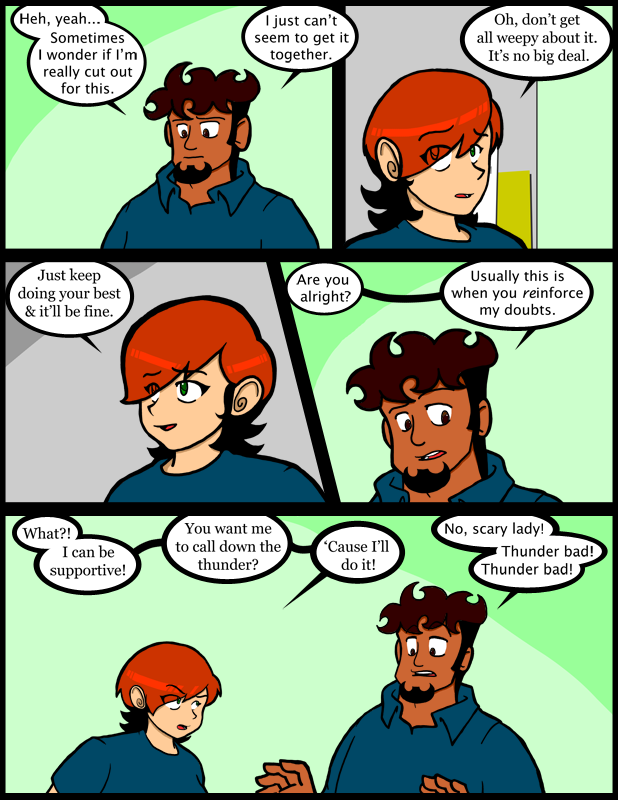 Okay, first of all, to those that it matter to, I’ll be in Garden on the 21.  It’s a Thursday.  No sneaky trying to stalk and kill me.

Secondtastic, the new Break Room link up top takes you to the forum that Rantark helped me set up.  We’re gonna try it out and see how it goes.

Thirdlish, if there is any one thing that Mike has going for him, that other characters don’t, it’s that he is insanely easy to draw.

He kinda reminds me of that robot from The Black Hole for some reason.  Vincent, not the evil devil robot.

You know there’s a kind of armor that appears in most Final Fantasy games called maximilian.  It’s named after a style of German plate armor, I would assume.  Anyway, I always think of that evil robot when I see it in the armor lists.

Know what you never see in armor lists?  Ernest Borgnine.  Who starred in The Black Hole, with Roddy Mcdowall.  They also worked on a little movie together called The Poseidon Adventure, with Gene Hackman.  Hackman who was, of course, spectacular as Lex Luthor in the Superman movies.  Superman worked with Batman sometimes in a series called World’s Finest.  One of Batman’s enemies, the Mad Hatter, was voiced by Roddy Mcdowall.  A more popular villain was the Joker, voiced by Mark Hamill.  He was, of course, the best Joker ever, but also Luke Skywalker in Star Wars.  Star Wars is often referenced on MST3K.  Ernest Borgnine appeared in Merlin’s Shop Of Mystical Wonders, which was lampooned on MST3K.  I’m sure you can see now that all roads lead to Borgnine…

Hey, you really update this early, or maybe I just checked it early….. Hm, yea….. right…. Anyway, just checking in to see how it’s been going, it’s been a while and I’m relieved to see everything’s still good. Ok, well, seeya around.

Did you know that The MST3K episode of Merlin’s Mystical Shop of Wonders was actually the last aired new episode of MST3K, even though Diabolic was the official last episode.

“Remember to believe in magic, or I’ll kill you”
– Mike Nelson.

:D
Have you ever seen Hell Comes To Frogtown? … just askin’

I was going to say this comic needs more Borgnine references, but then you said Goldblum and now Goldblum is all I can think about.

Whenever I think Borgnine, I think of his appearance on the Simpsons, where for some reason he wore a captain’s hat. That, or the Single Guy, where he played a doorman and wore those awesome shoulder-tassles. I guess what I’m saying is, everything’s fashionable when you’re Borgnine.

I like how Mike regards managing a store with the gravity one might regard, say… commanding a foxhole in WWI.

Borgnine was wearing a captains hat in the Simpsons because one of his most famous roles was as Captain McHale in the show McHale’s Navy. Look it up, it is quite funny.

Ernest borgnine=Win….in fact he is made of win. Apparently Mike is part frankenstein…..Fire bad, Lightning bad!

superman’s weakness is magic and kryptonite, flash’s is fatness, while failman has a weakness to thunder. poor failman

Thanks for that Nerdy Tirade…

Mark Hamill was without a doubt, the best cartoon Joker there has ever been, but then, everything about that show was amazing. Also, I noticed how as Lex Luthor, Kevin Spacy and Gene Hakman look really similar.

I do enjoy the Heath Ledger Joker in The Dark Knight. Not sure why. I always assumed the Joker was brilliantly sadistic character, aside from the usual chitter-chatter about “boners”. And committing them.

Calling down the thunder could be interesting. lol.

I will always remember Borgnine as the voice of Mermaidman from SpongeBob.

A senior citizen wearing a bra and “overacting”. Brilliant.

Yes thunder is bad. Also why dosn’t mike have a number in his ear?

Electric Mouse Carol?
All bouncing around and electrocuting Mario or smothering him with her huge rack?

Mark Hamill’s the best Joker in my opinion too. And pretty much the best voice actor of our day, and one of my role models (I’m an aspiring voice actor).
MST3K is awesome too!

Is this a Tombstone reference? If so, yay! :)

Call down the THUNDER, O GODDESS! CALL IT DOWN AND SMITE HIS INSIGNIFICANT WISHY-WASHY ARSE!!! THUNDER!!11!!1!1!2

@TheFlyingGreenMonkey He does, its a seven but hard to spot