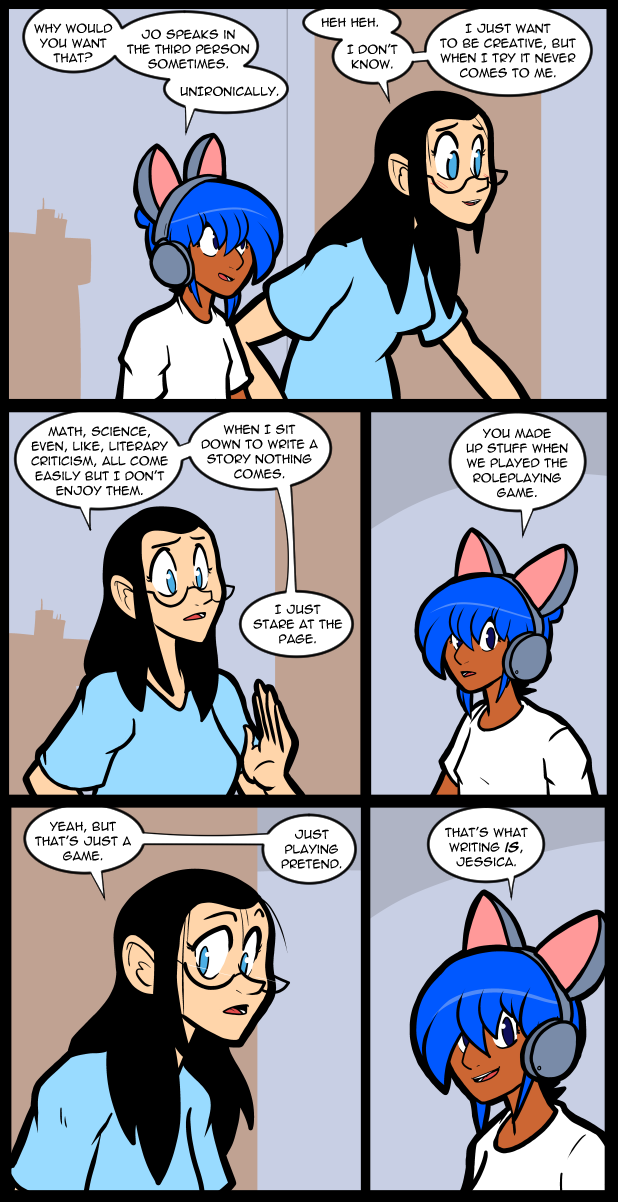 In fairness there’s a little more to writing, but really not much. The reason I can write how I do is from playing with toys when I was little. Imaginative play, for me at any rate, is the foundation upon which my writing is based. Generally speaking that sort of thing is of no value to most people, so once they get past the age of playing with toys they lose the connection to it, assuming they had it at all. Some kids don’t play that way. They ride bikes, or play house, or whatever. I’m so emotionally crippled that even to this day if you stick two toys in front of me I instantly start thinking about interactions. For me it’s as much a coping mechanism as anything else. Trying to impose narrative sense on a world that really doesn’t have any.
Jess has become accustomed to seeing the world and her place in it in a very particular way. A way that has given her a kind of tunnel vision. In addition to the responsibilities & expectations imposed on her by her parents and society at large. He adult personality is a rejection response to those things which many people go through for various reasons as they begin to make their way in the world as an independent being. She routinely makes an effort to hide her actual abilities in order to keep the expectations of others low. She is like her brother in that way but with a different mechanism for keeping the weight of competence off of herself.
The world likes taking advantage of competent people. Not maliciously, but it happens regardless. People can sense competence and want things done for them. If you can find someone who can do a thing easily other people will try to take advantage of them as much as possible. Some people can thrive in that kind of situation while others get slowly ground down as more and more expectation is heaped on to them. In my experience that’s why the best coworkers I had always burnt out and quit. They would do much more than other people but without any compensation to match they would get sick of it and go elsewhere. Of course the pattern would simply repeat itself but that’s the nature of American business over the last 30 years. Treat every worker as a disposable resource that can be used up, thrown away, and replaced. My guess is that’s true in other places as well. In any case I guess we’ll see how Jessica finds her way as the story continues together.

This week has really messed me up. I don’t know what I’m doing that’s making my back muscles get so screwed up, but I keep waking up in various states of panic caused by pinched nerves or some kind of muscular distress. It’s moving up and down my back and working in concert with allergies and everything else. The reason why this page is up so late is that I slept for two hours then woke up in a state of anxiety and couldn’t get myself properly under control. By the time I managed to reign things in it was time to be up and taking care of making meals. Eventually I had to just try and sleep enough to get by and hopefully make this page. I got about 3 hours of sleep. The lights had to be left on because for some reason not being able to see things was triggering. That isn’t a completely uncommon thing for me but it’s rarely so acute. I’m not afraid of the dark, but sometimes darkness seems to allow my brain to become overwhelmed by images presented by itself to itself. It seems to run parallel with these bouts of extreme allergy reaction. I tried some eyedrops but I got one of the headaches they sometimes cause for a few hours. I have part of my area cleared of boxes so maybe tomorrow I can wash blankets and vacuum the floor. That might mitigate the allergy issue somewhat. It’s supposed to snow badly out here over the next few days so maybe that will put some of the outside dust down for a while. I don’t care for snow, but we do need some kind of moisture to keep the land from just blowing away and into the house.
Also if the snow is bad enough it often knocks out power and internet which makes the house very cold and isolated. I have my small battery in case things go badly awry though. I could heat one room and wait things out with the dogs until things warmed up theoretically.
Anyway, I guess I’ll end this now and try to get my shit sorted out before Monday rolls around. I apologize for not having the page up at the appointed time.
Please consider supporting my work via the links above and I’ll see you next time, god willing.

I wish Jess would recognize that literary criticism is a creative form in itself. They give out Pulitzers for it, even.

I do not know if others note the time that your new page appears, but I have outlived the need for time. I rarely know when a thing is about to happen anymore they just happen when they happen. I am fine with this. I had to keep track of time when I worked. I had to journal my day and note the time at every journal entry. I took my watch off the day I retired and had the words “question everything” tattoo’d on my wrist where my watch used to be. Cheers ~ulrich

Jo’s not wrong. Writing is very much pretend. Crafting fictitious elements/world in your mind then transferring those very thoughts to paper. It can be very intimidating at first but once you get going the rock rolling down the hill gains momentum. Then annoying things like writer’s block comes to cause you grief every now and then. And in some cases it is relentless and can take weeks, months, or even years to get over. That’s a pain in the @$$ let me tell ya!

The secret word of the day, rather phrase, is “Schizotypal Tendencies.”

These are the things that make a writer able to see another world, populate it with characters, and imagine what they would say or do in certain situations.

It’s an offshoot of schizophrenia! Yaaaaay!

Isn’t that the same as imagination? (serious). Anyways, now I’ve got a new phrase to google and diaappear down a wiki-hole with. Thank you!

Never before did I notice the similarity between the words “disappear” and “diaper”. It probably doesn’t mean much.

I remember being evaluated for schizotypal tendencies when I took the MMPI. I kinda feel like that’s not quite the same thing. It’s just imagination and empathy.

You gotta have fun with it Jess. Getting the cash is the 1%, 99% of the time is having fun.