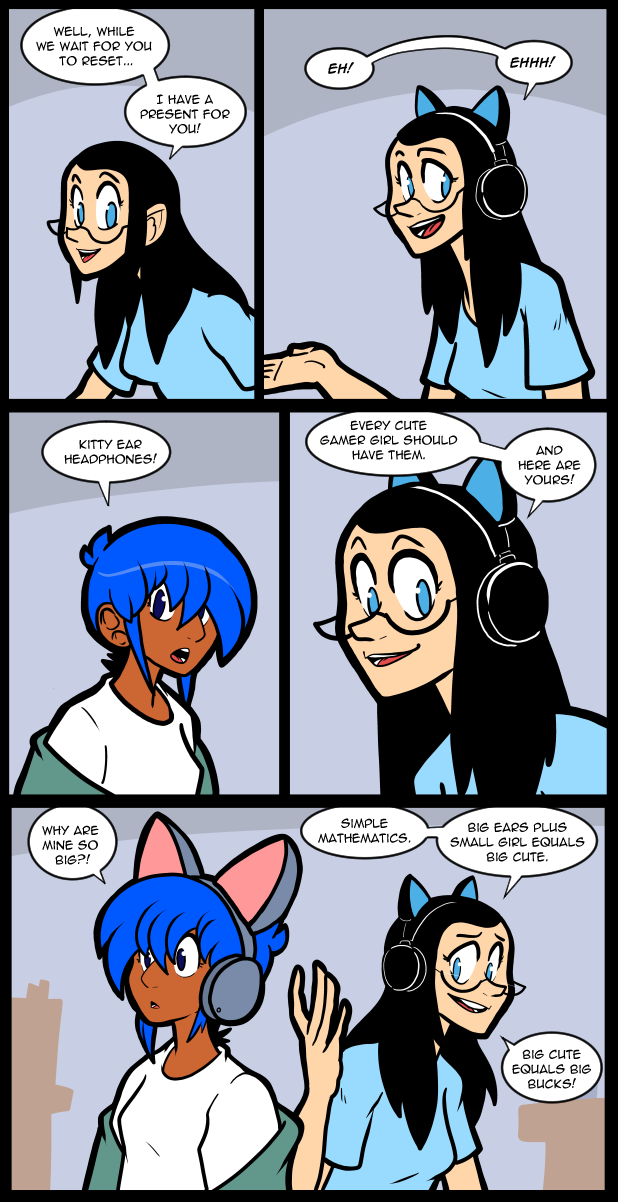 I decided to finally go back to the regular story again at long last. I considered going for an even 100 between pages, but they’re already messing up the timeline & I can’t always hit a specific page count on purpose. Better to stop an a nice place rather than risk it. I think I’m at a point where I can handle normal pages again. I’m sleeping enough that most of the time I can function for most of the day without hitting a wall where my body demands sleep. If it urns out I can’t handle things, or something else goes wrong I’ll figure it out. You guys have been more than forgiving with me so I’m not terribly worried about the future, state of the world not withstanding.

I finished Deedlit in Wonder Labyrinth. Actually I finished it several days ago. It was really short. That was the only disappointing thing about it. I would have happily played hours and hours more of it. It’s so incredibly similar to Symphony Of The Night and that’s exactly my favorite type of this type game. As a fan of the series the story was bittersweet. An immortal being who associates with humans will always be parted from their friends as time marches on. Joining the new era of the stories via this game was a cool idea. Lodoss War was one of the first anime titles that was readily available in the ancient times before it was cool to like it. I really hope that if you’re in your late teens, or twenties, and a fan of anime and manga, that you’ll circle back to these tales by any means you can. I expect that almost everything is out of print at this point, but someone must have archived them someplace on the internet. I’m pretty sure I have at least one soundtrack CD on my shelf if not two. They were so crazy expensive back then. I don’t remember if I have a VHS or not. If I do I doubt I have the means to actually watch it. My guess is that most of my VHS tapes have deteriorated from lack of use. I only ever replaced a few with DVDs over time. I worry I won’t be able to see some of these things ever again as we move into the era of not actually owning anything. Honestly I’m glad I’ll likely be dead before humanity actually gets there completely. On some level it’s hypocritical of me to say that when I haven’t offered physical copies of my own work, but in my defense it’s very difficult and I’m a barely functional human on a good day.

In any case it was a lovely gift and I appreciated the time I had with it. I may revisit it at some point to see if I can unlock the alternate ending, but the conditions for doing so may be beyond my ability. The bullet hell mechanics are a bit fast for my old reflexes.

If you want to check out the game yourself it’s available on basically anything. I prefer physical but if that’s not a problem for you it would be easy to just wait for a nice sale and pick it up cheap from whatever eshop you prefer.

Anyway, I guess I’ll end off with my plea for support on patreon or subscribestar via the links above and wish you smooth sailing until we meet again.

Aw, I was hoping to see more of Victoria developing feelings for John.

We’ll get back to it eventually.

Fair enough. Just hope eventually is soon. The two of them are probably my favorite characters and my hyperactive shipping squirrel brain knows they’d be adorbs together.

And on this day, page 2462, Jackie broke the Ador-O-Meter. Once again.

Can confirm that cat ear headphones are cute. They don’t even have to be on gamer girls.

I need me a pair of cat ear headphones

I did not get the wait for reset reference. Did I mis something?

Just picking up the story where it left off because of sick days and other stuff that kept popping up. Start from here:

And a few comics ahead, then today’s.

The problem is that the cute factor has been destroyed by the vtuber phenomenon.

It’s hard for any flesh-and-blood girl to be as cute as a carefully-detailed vtuber model.

Examples? Just try comparing Brooksie to Ironmouse. Or Gura. And there you go.

Our Miss Brooks could certainly take on Henry and Jeannie without incident, but Brooksie versus Choobie? I fear the fight was over before it began.

Ah but don’t you see. Cute isn’t a simple linear scale. There are several types and domains of cuteness. 3D/Photo realistic cuteness exists on a separate axis from 2D/Drawn cuteness and in many cases even from 3D/computer rendered cuteness…

Ironmouse is cute.
But so is Jessica Nigri cosplaying as Ironmouse…

Equally cute but in different ways / for different reasons…

It’s uncanny valley. With anime being as popular as it is, when people see other people with 3D anime avatars interacting with the audience in real-time, they want to believe that they are talking to a living, breathing cartoon.

Kizuna Ai helped kick off the phenomenon and Iron Mouse is arguably the most popular of the English speaking VTuber crowd.

Maybe it’s just the way entertainment is evolving I guess…? :/

I had no idea you played it. I played it without watching the show. And as a fan of Metroidvanias, really liked it.

Just replace big “ears” with another 4-letter word that rhymes with “bits”, and Jess would pretty much have the e-girl career development plan down. So long as you don’t consider the confounding factor of “big competition” because that’s alot of syllables for someone who licks silicone for money. Although sometimes I think those e-girls are still more self-aware than the people in charge of “real” entertainment. And I’d rather my money go to an expanding collection of artificial disembodied phalluses than the next Epstein island.

Deedlit in the title game plays EXACTLY like Alucard. Her move sets are pretty much a carbon copy of Alucard from Symphony of the Night.

Does that make Wonder Labyrinth a bad game? Not really. Non-linear platformers or NLPs, (I do NOT refer to them as Metroidvanias) are a great genre and do sell. It’s still worth it for people to check out.