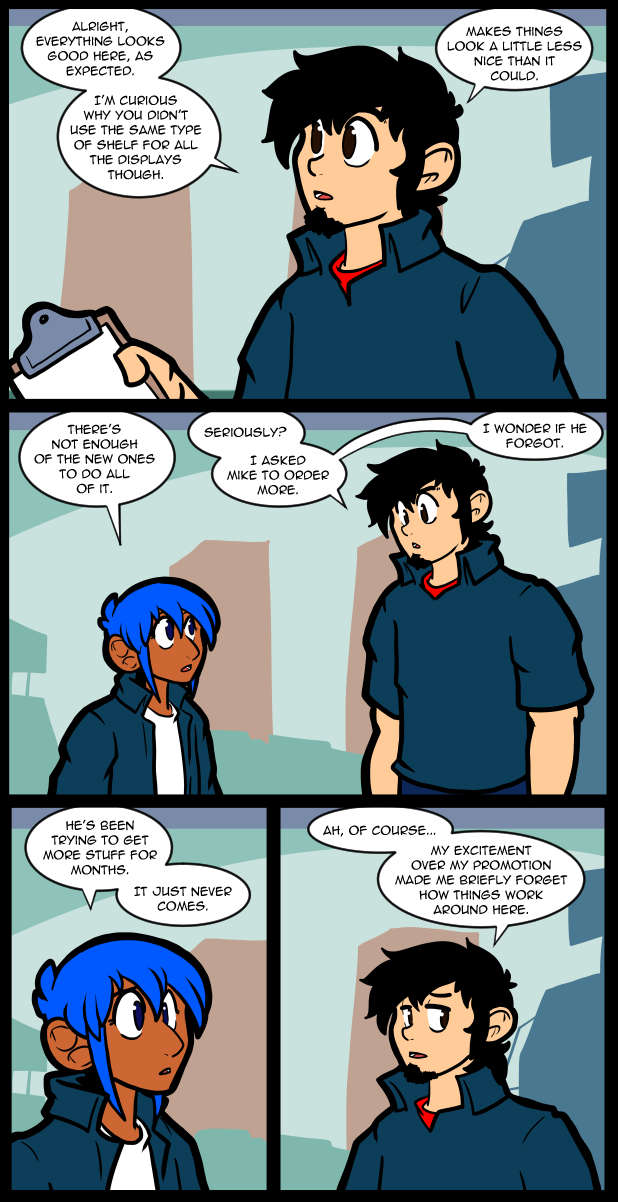 When I was in retail shelving was a constant concern. I don’t know if it still is, but here was never enough of it. Also peg hooks. People would wrench pegs off the walls which would leave a spot that was unusable until it was replaced or repaired. Except we weren’t supposed to repair things, we were supposed to put in a repair order. Never mind that the back rook had an extensive tool kit for, presumably, doing repairs. In the near decade I worked at one place no repair order was ever fulfilled. What repairs that got done we did. In point of fact I did most of them since dad actually taught me how to repair things as a child. Even when the store was remodeled things were left in a state of disrepair. Now of course the store is gone and I wonder if anything I did really mattered at all.

One thing I do know of that matters though is the support of readers like you. Please consider supporting the comic via the links above, or relentlessly shoving it down the throats of people you know on social media. To the point that they ask you to stop. Or even after that point if you’re feeling hardcore.

Instead of the very graphic sympathetic post I was writing, I’ll just say “peg hook” needs a CW.

IMO, they had similar experiences in retail, and being reminded of those horrific things (in a retail sense, for the reasons you mentioned…and more…) brought back memories ;)

from what my ex told me from working as merchandise op in a pet shop chain, this is 100% accurate

I worked in a video store most of high school. We had the shelves we had and we made room accordingly. Things could get pretty cramped, especially in the older-release sections. We were constantly adding titles, and almost never getting rid of anything more than duplicates.

That was one of the good parts about retail, though. Teaches you how to improvise and adapt. And overcome, as Eastwood said in “Heartbreak Ridge.”

I once entered into an ordinary small bookstore in a mall in Amstelveen. It has an amazinglyncomplete collection. But only one copy of each book. I gather that the publishers there were very efficient in fulfilling individual book orders efficiently.
“Only one copy” seemed to be true of best-sellers, even.

The little part that each of us does to push back against entropy delays the eventual heat death of the universe. So yeah, it matters.

Also, it got you a paycheck. I feel like it would be my fault if I was thinking too far beyond that.

Kind of interesting to read about other peoples experience in retail. Having worked at both Target and Walmart, shelving was never an issue. There is literally an entire gigantic room in the back filled to the absolute brim with shelves (as in, top to bottom of the entire building) of all sizes.

Both retailers I worked for are very large, and they used standardized shelving across all their stores for everything they did (even the fancy display shelves were really the same shelf with a casing on it). From reading these comments, I take it not every store does it this way?

Oh and I forgot to mention, ditto for peg hooks. Thousands of spare peg hooks, peg hook backers, the price holder plastic thing on the front, just tossed into large bins to be grabbed as needed.

I once worked at a retail store, where all of the peg hooks were in a room, under lock + key.

I guess they wanted to keep everything “nice + neat”.

Everyone in management had a key to this room.
You had to go + get a management-person to unlock the room for you, each time you ran out of- your handful of peg hooks.

These people were batty.

I found a job, in a different store, as soon as I could. Meh.

I don’t have a retail job and haven’t for years.

That said, I like working in places with enough layers that people on my level (maybe as up the ladder as John is) and their immediate coworkers are removed sufficiently from the fools upstairs so I can do my tasks: Fix the devices and make the users happy.

My manager, and their manager, have lots of meetings and do stuff to keep the higher levels from getting in the way of this.

And yes, it does remind me of Mike saying that he’s this store’s “tank”–the shield who keeps needless, unearned punishment off the functioning underlings.

Makes me wonder if the supplies I need to do pricing will be there next time I’m at work.

I’ve worked at the same big-box store for nearly 20 years, and there has always been a shortage of certain types of shelves. Requests go in, but nothing arrives. When the store remodels we’re lucky if the display is replaced, but then they only give us enough shelves for the plan at that time, if it changes and adds a shelf we’re SOL.