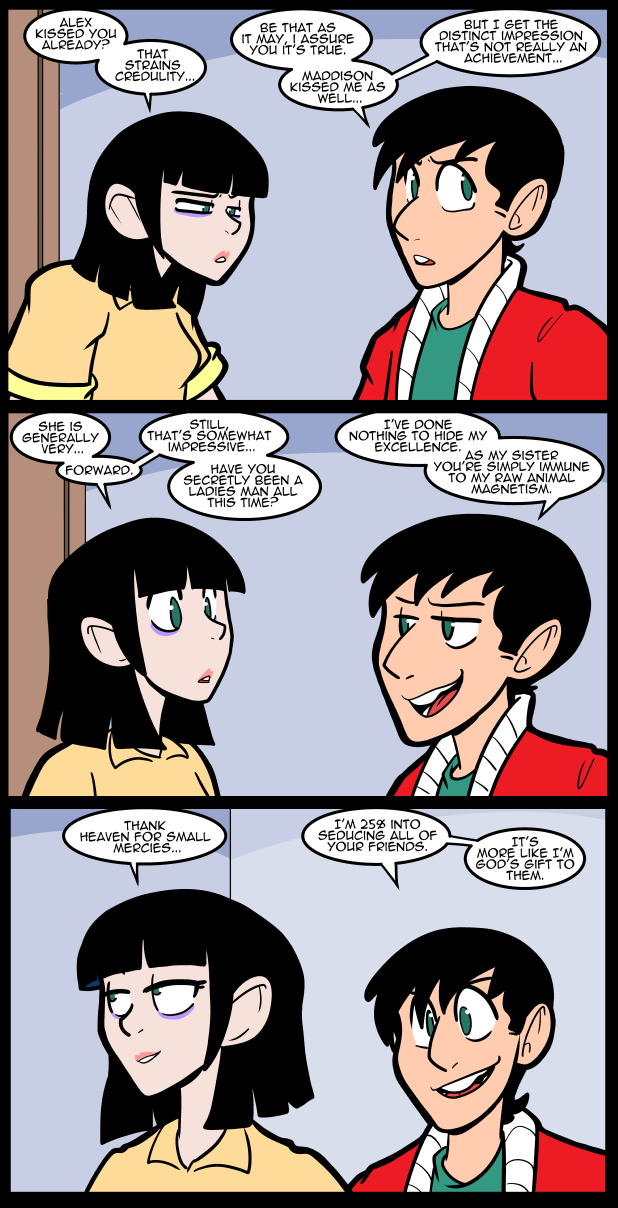 Technically Reggie hasn’t seduced anyone. Arguably Maddison seduced herself. He’s just endeared himself to Alex by managing to not be a total dick for upwards of 180 minutes. He’s probably underestimating his sister’s circle of friends as well. Still, he’s Reggie, so on some level he probably believes that. Regardless he’s got a legit shot at Alex & Maddison is just a matter of choosing to be an animal instead of a gentleman with a code of ethics.

And there’s the arrogance from Reggie we’ve come to know and love. Although I ship Reggie and Nina I’m looking forward to seeing how this plays out.

Arrogance? This sounds much, much more like brother-sister banter to me than anything else.

I would say it’s a little bit of both.

It’s funny how a bit more perspective into the better side of Reggie’s character makes a difference. When he was first introduced, I would have absolutely hated him for that comment in the last panel because of the aforementioned arrogance. But now, when said comment is presented following several instances where Reggie has actually been shown having compassion for another person (Maddie in particular), and especially presented in the form of brother-sister banter, I find it absolutely endearing.

Paraphrasing Lady Ace: ‘No one is just one thing’

There is also that little tidbit about seducing 25% of her friends thus implying she has 8 friends.

Right? I mean, she talks to these women on the side. Antagonizing her is asking for her to poison the well, so to speak.

foducol’s comment is well-taken but to be honest, I don’t think Reggie’s sister (name temporarily forgotten) could poison his relationship with Alex or Maddison at the moment.

Oddly enough I don’t think she could make things worse between Reggie and Evrina either.

I wrote that last part in full knowledge that Evrina doesn’t really like Reggie, not to suggest she does.

I’m just saying I don’t think Evrina could be induced to like Reggie less than she already does.

“I hate you more than I did already.
Wait, that’s not possible.”

Brother/Sister is so very anime.

Reggie is a secret agent.
His code name: Secrtly. ;D

This feels like two Dowton Abbey nobles shamelessly talking about their exploits, or lackthereof. Would be interesting if Victoria fell in love.

This is great banter! I feel your writing is getting better as this comic continues.

Ah yes, how can we forget the Reggieforce? Best perk in the universe, makes u roll a nat20 every time you try to seduce any of your sister’s friend

Is that because of some unexplained preference for Reggie over his sister?

Quite possibly, I mean, she’s a furry

I love the facility with which these two use language — especially when they’re jousting.

If you like philosophy, here’s a question-
is a gentleman, or a gentlewoman, much more than, an animal that decided to follow a code of ethics? Hm.

Perhaps, if they are fully aware of the rationale behind such ethics than merely following them arbitrarily.

Is it just me or does Reggie look slightly cross-eyed in that last panel?

Ye he looks dumb in panel 3

Really he looks fine, the hair over his right eye is just doing an optical illusion thing, making him SEEM cross eyed; also, for a hot second I thought reggie meant he was 25% committed to seducing all of Victoria’s friends

We’ve also forgotten miss “My body is ready” who seems like she’d be ready to throw in for fun. XD