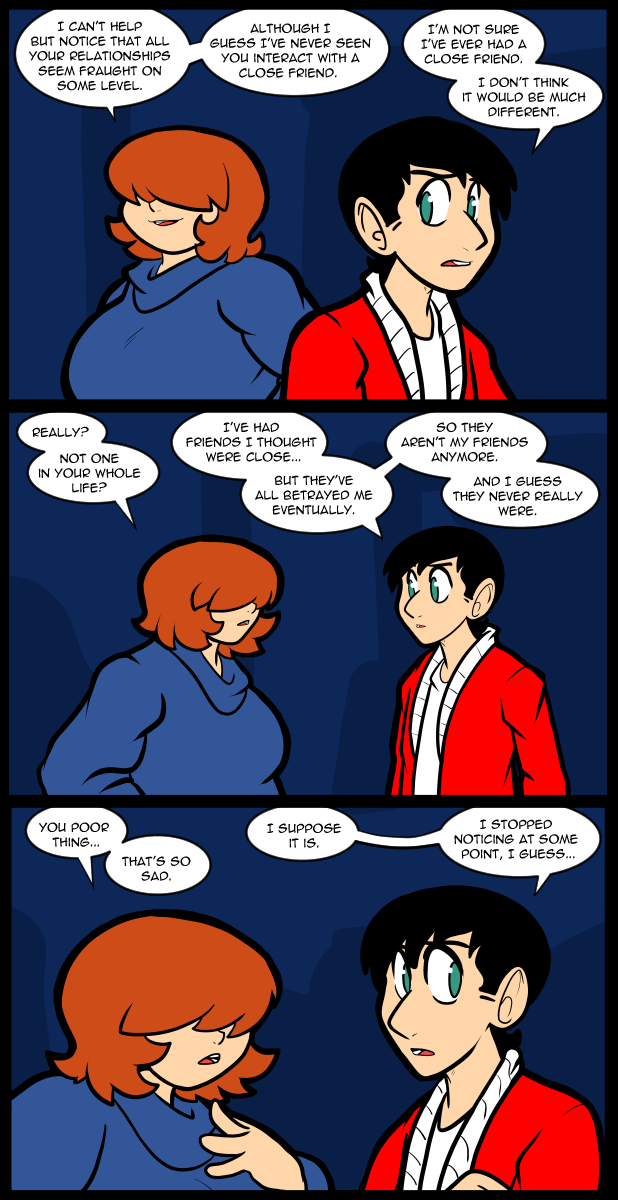 My feet have been bothering me a lot lately. I’m not supposed to eat stuff with a lot of salt in it but holiday food is loaded with it & that’s all there is for a couple of weeks & my pills can’t quite keep up. You might not think that my feet would have any effect on drawing a comic, but it makes it incredibly hard to maintain any focus when my feet feel odd. It’s actually easier to have a headache and work than it is when my bad foot is swollen. The trend will ebb away from ham and meats soon & I’ll go back to not having to deal with it soon though. I found new chips that have a lot less salt in them so I can actually enjoy them more. They taste like corn instead of salt which is what most foods taste like to me since I avoid it so much. Your body gets used to things over time so I can’t stand salted peanuts now. They taste like trying to eat a handful of salt. It’s so crazy how much we pour sugar and salt into everything. You can barely taste anything. I wonder if it’s like that everywhere or if it’s an American thing… I’m not sure, but I do know that I’m not salty about people supporting me on patreon and subscribestar. Hopefully I’ll actually have some extra content soon. I hesitate to say why for fear of the universe impeding me again…

Oh my, Reggie being vulnerable, this hasn’t happened recently.

*Crawling in my skin, these wounds they will not heal*

From many other people Alex’s words in panel three would be snark, but her hands and expression really make no mistake here. Boffo stuff, Jackie.

It’s all in the delivery. I suspect Reggie will be reconsidering his definition of friendship soon.

Speaking of Reggie’s “close friends”, whatever happened to Wes? I don’t miss him at all, I’m just curious.

IIRC, Wes’ only friend is himself. Even to Reggie hes just a co-worker.

“Don’t surround yourself with yourself.”

I’m originally from Massachusetts, live in Korea now, and lived in Japan a few years before this. I can confirm the salt and sugar overload is definitely an American thing. Everything I ate for my first month in Japan, and then again in Korea, tasted like nothing, and when I returned to America from Japan everything tasted like you described, a handful of salt and/or sugar. I never really realized how sweet corn is until I traveled here to Korea where it’s treated as a dessert flavoring.

American food is terrible for salt and sugar. I’ve lived here for over 20 years and still can’t stand the amounts they put in foods. American KFC is 100% inedible, though I’ve tried it in other countries and it’s ok. But many foods leave a sodium burn on your tongue after eating, so you can’t taste anything else for a day or so. The best way I’ve found of coping is to put problem foods in a large container that you then dilute with things like coconut paste and milk, then make stews out of them. I don’t even have salt or sugar in the house – not needed. Also, certain chains like PF Chang’s coat everything in a sugary batter – I once sent back a meal there 3 times because I asked for garlic beef, not sugared-beef – it was like eating syrup, in the end I just left it. Never went there again.

PF Chang’s?…I think it applies to just about every Americanized Asian food place. If it isn’t in that sugary batter then it has a side of duck sauce or that red syrupy gelatin goo. And yeah, that craze for salting things that don’t ordinarily have salt doesn’t help. It seems like every time you start to push back on one source of salt/sugar another one pops up. I can’t order sweet tea in a restaurant any more. Over the last couple of years it has reached the point where it just tastes like eating a spoonful of sugar.

Which makes the medicine go down…

I hate to say it, but- my suspicious theory is-

I guess- a LOT of fast food places, + F F companies, probably overload their foods with salt + sugar, so this will motivate you to (then buy THEIR soft drinks + desserts), just so you can drink or eat the drinks + desserts, + get the horrible tastes out of your mouth.
Hm.

Gotta say Reggie, if you’re batting 1000 with close relationships like that, maybe you gotta start looking for common factors to all situations.

My first guess for a lot of salt would be to drink more water. That stuff really helps with a lot of problems. There’s a whole school of thought that says Type Two Diabetes is just long-term dehydration come to roost.

Whether any of that is legit or not, “more water” is seldom a bad plan.

Still though, awesome comic. Though I wonder how much of the “betrayal” was just people reacting to Reggie being Reggie and Reggie not having it.

I once went on a low-salt diet. For a while everything tasted bland. But after a month or two, my body chemistry readjusted. Things that used to taste normal now becsme a salt overload. My sense of taste changed. I figure my body had set up a salt pump to get rid of excess salt, and it took a while to shut it down.

Similarly, I had been eating tgree times as much food as my wife and still losing weight at the rate of about a kilo every two months or so. I calculated that my weoght would be down to zero in about seven years. Of course there was a good chance I would die first…

At last I got a diagnosis: pancreatic calcification was preventing essential digestive enzymes from reaching the digestive tract. I could not digest all the food I was eating.

Result: A month after I started treatment, my food intake dropped enormously and I stopped losing weight.

What I found interesting is that it took a month for my appetite to adjust to the new reality.

Wow.
I’m glad that you’ve found a way to cure that issue.
Cheers.