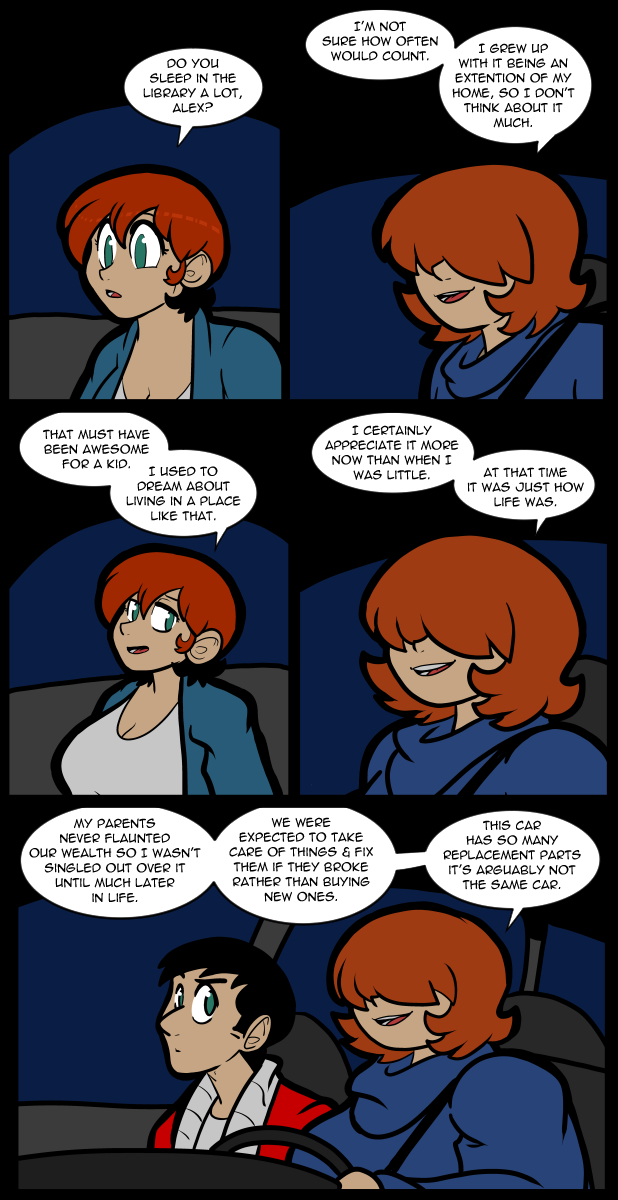 Maintaining wealth is as much about habits instilled in children as anything else. If you let them grow up as rich idiots they will. The same way if you grow up poor you’ll always be poor, no matter how much money you make, unless you change your way of thinking.

So, the Ship of Theseus, landlocked version?

I just have the feeling that Alex, Carol, and Reggie all know what that means.

With some of the cars I have owned, it could be argued that I have replaced them twice!!

A comedy juggler named Michael Davis had this as part of his routine:

“This axe used to belong to George Washington. I had to replace the handle… and the head.”

He started hammering on top of the axe. “…don’t want the head to fly off… again…”

I checked YouTube and found a performance where he used many of the jokes I remember. Here’s a link with a time cue for the Axe of Theseus joke.

Reggie seems skeptical of this branch of conversation.

He is probably more interested in the philosophy of “fix over replace” when her family was that rich and how similar it is to his upbringing. After all he is no pauper himself

Though these days “fix over replace” is virtually impossible. Product designers have been specifically designing products to be largely inaccessible to consumers for years now, last I knew. My dad bought a Chevy Equinox. He discovered he was largely unable to change the oil in it because the port to drain the oil can’t actually be reached with any tool he owns.

In contrast, an Austin Healy Sprite is almost infinitely rebuildable. Jay Leno, when showing off one of his vintage cars, likes to point out how the owner’s manual often has more info than a modern repair guide.

One of my favorite books, John Dies At the End, starts with something like that. Say you get into a fight, and in the process, you lop a guy’s head off with an axe. But in the process, a big chip comes out of the head, so you replace it. A few days later, you’re splitting wood, and the handle snaps in half, so you replace the handle with a new one.

Now, when that guy’s corpse comes back for revenge, and he points to the axe and says “that’s the weapon that killed me!”, Is he correct?

I’m not sure that comparison really works, considering axes have a widespread variety of uses; they can be tools or weapons (usualyl the former nowadays).

Guns don’t have that – they’r weapons.

Guns are also sporting equipment. Golf clubs can be quite dangerous too.

Shifting gears, here in MA IINM you can literally carry swords, axes, etc out on the street if you want. The only legal requirement is that all blades be guarded when not in use. So a sword must be sheathed, an axe must have its cutting face(s) guarded. This is usually done with leather. The things you learn working at the Ren Faire.

I’d also like to bring up that- for the USA, guns are also used by some, [for self defense, by adults who responsibly- use + handle, +store…guns].
In most cases, I support this type of firearms use.

And predator and dangerous animal control. Have never carried with the thought of needing it for something on two legs.

I’d be interested in the statistic that indicates most axes are weapons nowadays. I’ve personally owned several, my family several more, I’ve used/borrowed yet more from various friends. Never once was one used as a weapon. In fact, the only axe murder I’m even aware of was Lizzie Borden. If you have some significant stash of cases I’m interested.

Lizzie Borden took an axe
And gave her mother forty whacks
And when the job was nicely done
Gave her father forty-one.

I feel like Jon Lajoie must have been an inspiration for that line.

On a different note-
my Congress-people just sit around on their axes.

this needs to be made litteral. Make them all sit on an axe

The arguably not the same car line cracked me up. There is a mechanic I watch on the you tubes that works in a cold state where they use road salt and do not have vehicle inspections. He says that people keep repairing their cars until they don’t cast a shadow. It also reminded me of a comic who many years ago had a bit about George Washington’s axe. He had an axe, he said it was George Washington’s axe. It has had the head replaced twice and the handle 5 times but it does take up the same space.
Cheers from the currently flooded wilds of BC Canada. ~ulrich

I’ve had the same debate with people over my desktop computer. I’ve never replaced the hardware wholesale, and even the OS has been steadily updated since Windows Vista. Is it still the same computer? I genuinely don’t know.

Intel giveth, and Microsoft taketh away.

It sounds like all that is original is the case. And maybe the power supply. Unless it still has floppy disk drives?

The problem with the fixing something rather than replacing it is that there eventually becomes a point where continuously fixing something costs more than getting a new one. My first car was old and in poor condition, so a part holding the front axle in place broke and wanting to gain a bit more of a money buffer before getting a new car, I got the part replaced. When I eventually traded the car in a year or two later, the car traded in for a bout a third of the cost of the repairs and if I had waited longer and it broke down a few more times, I could easily have payed about as much as I payed for the new car (well, used, but new to me) on repairs and still had a car prone to braking down.

The real money saving technique is buying something high quality so you can use it for a long time without it braking down or (if relevant) becoming obsolete, and thus minimizing how much you have to pay past the initial payment. (Of course, especially in the case of a car, there’s always a chance for an accident forcing repairs, but driving safely to minimize your chances of this is also a good idea for saving money, among other reasons.)

This is my general take on technology. It’s why I’m bummed about Samsung not really doing the Note like they used to, where it was two or three years ahead so that it would be years before they became obsolete. I’m holding on to my Note 10 still, waiting for something to spark my interest. Even if that means I don’t yet have 5G.

In my quest to understand Questionable Content, I have made some further discoveries. Certain spoilers, though these strips are from 2013 and earlier. While pushing through, I found a shoutout to BFails in strip 2289 and a guest strip from Jackie in strip 2455, which was fun. I didn’t remember this from the earlier read. It was all done while looping New Order, which I may have done the first time I read them too.

So QC is basically a 4-koma useless male with many hot girl harem story, where the girls like to talk about sex and bowel movements. It starts with a lot of attention to indie music but this changes. I’d say it’s aimed at awkward upper middle class college kids.

At this point, I would say the comic starts out by exploring the Marten-Faye-Dora relationship. When Marten-Dora blows up, we get a brief part where doormat Marten actually gets a bit angry, for a very short time but there’s still sort of green shoots of self-esteem. Marten’s boss Tai at the library quickly jumps into Dora’s bed while Marten has a fling with an Indian woman and contemplates moving with her back to California, and with that we could roll credits with a somewhat ambiguous ending. While I have my gripes, I kind of like this.

If you want to get all psychological about it, perhaps we can see the three as different aspects of Jeph. Doormat and musician Marten is ordinary Jeph, Faye is the unacceptable transgressive part, while Dora reflects business-Jeph. Hmm, not sure if I buy that entirely but there is some truth to it.

At this point, roughly at strip 2000 in 2011, the comic more or less reboots. The previous main characters are gradually shuffled to the back. The theme is grandly announced to be INCLUSION (in 2012), one character turns out to be TRANS, we get to see a GAY WEDDING, etc. In parallel, while there have been some SF tropes earlier, now they start crowding in a bit. The old cast is replaced by five or six new figures, three interns, a shut-in, a black guy, and a hologram robot (which I thought was pretty funny). This actually works well, most of them are perhaps a bit one-note but still interesting. Marten’s old boss Tai has also entered the stage previously, portrayed as a short cute polyamorous lesbian but IMO also being a pretty creepy schemer. Faye is still 1000% purely toxic and stays in the picture. The number of guest comics seems to be ramping up as the comic continues.

Some stylistic themes: one of the most common situations is where some of the characters can remonstrtate with one of them for moral failures or acting out of order. I would characterize this as being fluidless orgasms, seemingly suiting the New England / Massachusetts / College environment quite well. Many strips look a bit like they were written by a bullpen of TV comedy writers trying to outdo each other rather than one man and (sometimes) his Twitter. In the final panel, there are often two or three extra takes after the main fun. It’s a comfy style, which shows a great deal of creativity, I’d say.

I write this after reading to about strip 2500 in 2013, so there is still nearly a decade left to get current. But at this point, I’d say it has finished the first part nicely and refreshed itself with the new theme of INCLUSION. OK, I’m less than interested in this myself but I’m willing to go on. (In my previous follow I abandoned it around this time, then had a second look a couple of years ago.)

With that look on Reggie’s face, you just know the question on his mind is “Why WOULDN’T you want to flaunt your wealth?”

My parents raised me to be a middle class home owner. My actual income leaves me miserable and chased by creditors.