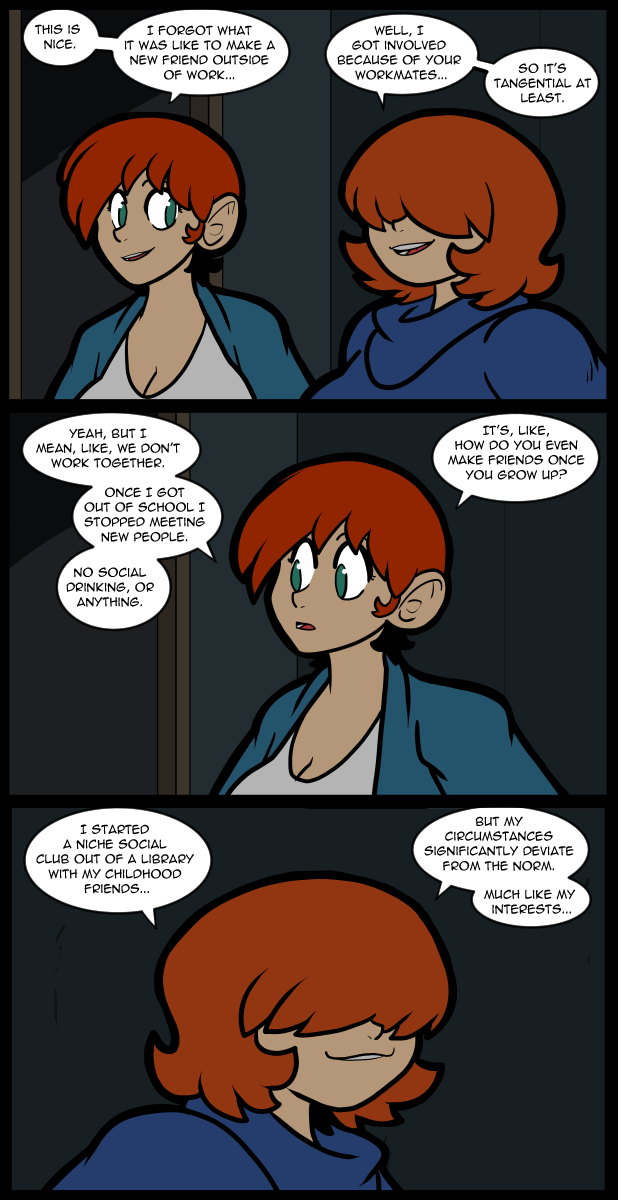 I don’t know what a person would do to make friends as an adult. All my hobbies are for one person except for some video games maybe. No church, no drinking, no interest in much of anything outside of my area really. Of course covid has kind of made everyone like me in that way for a little while & I can understand why the suicide rate jumped up. Hermitude is not for most people. Even I can barely stand to be alone with my thoughts without distraction. I just have years of learning to cope. Even within my community stuff like the discord it took a long time for someone to appear that was passionate about collecting to the degree I am & mostly people still aren’t interested in the paranormal. The fact that I’m basically a skeptic that enjoys the lore but doesn’t believe must contribute too. On top of that there’s my wildly erratic personality. I dunno, all I do know is I’m probably not the best source for advice on making friends. If you want to cut off the first three letters I’m your guy though, because I can end a friendship like a champ. Speaking of ends, I make ends meet with Patreon. Make sure the comic doesn’t end by supporting it with money. Also a subscribestar exists.

“The fact that I’m basically a skeptic that enjoys the lore but doesn’t believe must contribute too.”

Oh hey, that sounds familiar. Wife and I don’t believe in ghosts, but always loved Ghost Hunters. Phasmophobia was a real welcome way to relieve anxiety during the pandemic, too…

That’s the game where you hunt ghosts, right? I thought about looking in to it.

I played that with my kids, that game scared the crap out of me several times. Then I spend my time while I am dead throwing stuff at the ones still alive.

Hey, I’m just chiming in because I’ve seen some recent research that indicates suicide rates have either remained stable or even lowered so far during the pandemic! This is news I think is worth sharing. Of course, I’m not sure how things are locally to you all, but it seems like at least so far this pandemic has been bucking the general historical trend of elevation of suicide rates.

Here’s a few sources I’ve got:

– US suicide rates have been lowered in 2020 relative to previous years: https://www.healthline.com/health-news/why-suicides-have-decreased-during-the-covid-19-pandemic

– Worldwide suicide rates have remained mostly stable up to 2021: https://www.hopkinsguides.com/hopkins/view/Johns_Hopkins_Psychiatry_Guide/787393/all/Suicide_Risk_in_the_COVID_19_Pandemic

This is, of course, no reason not to pay attention to people and their psychoemotional states. We gotta support each other as we can. But some (possibly) good news in this time of hardship is always welcome, at least to me. I hope all of you are well and remain so. And if you need help, please reach out to people, close or the closest to you that’s available! Together, we will endure.

Interesting articles. I wouldn’t be surprised to find that there may have been a spike in the suicide rate at the beginning of the pandemic, followed by a dip reflecting those people who would have killed themselves a little later but who were provoked by the stress of the pandemic. That is to say, these are the people who would have killed themselves anyway and events pushed them into a clump. Over a longer time frame, say five years, the rate would still be fairly constant. As the articles note, suicide is often a more complex process than it might seem, so making any predictions is going to have it’s limits.

Hopefully that means what it sounds like, and not that many of the suicidal people died, instead, via overdose or something. It’s also interesting since suicidal thoughts and tendencies in adolescents shot up. I hope it’s good but I fear it may just mean that, as move out of “huddle together” mode, and people see how much their lives have been disrupted permanently, it shoots back up.

I’ve gone to city reddit meetups to make friends, some have been great! Couch surfing meetups too. Sometimes it takes a couple trips to find someone who matches your interests, but since everyone is there to meet new people it’s no hard feelings if you don’t click and move on. I’ve met people through the gym, or hobby stores, and my socially awkward ass has stumbled into a couple friendships that way. Still, most of them have been through work.

I feel like it’s important to keep in mind not everyone you meet will become your new bestie, and that’s fine. Some friends I have for sharing games, other in animal and curios interests, others for writing, and so on. No art friends yet tho. Someday…

My partner and I were *just* starting to branch out to hanging with friends before COVID-19. Even then, they were mostly her coworkers and she works at a start-up, which usually attracts outgoing and personable people. I like to think I’m pretty personable but I get so awkward when trying to initiate social stuff. If I’m thrust into the scene, I play the part great.

I feel weird trying to connect and hold onto good friend groups. I’ve got a D&D game I play with some old college friends but that’s basically the best I’ve got. I had to make a book club with my sister just to have a reason to stay in touch with each other because we’re both so bad at reaching out.

I actually made a new friend a few months ago. We do have a common interest. I have no idea how to make friends so I just told the guy this and asked him if he would be my friend, exactly as I was taught to do about 64 years ago. It worked just like it did when I was 5.

Yeah, I don’t really know how to make friends much, either, unless you have a popular and shareable hobby, making it easy to go join a club to do X. But part of me thinks it’s because we look at “friendship” all wrong these days; we focus excessively on trying to find someone who likes the same things we do, rather than a person we can respect and admire (I don’t mean hero worship, just a good person we truly feel is worthy of respect). My best friends in life have been people with whom I shared a limited number of hobbies or interests with, but because we had such a great respect for each other, we’d gladly go do those things, or take turns trying out what the other one likes. We could also just talk; even if we had nothing to do, we could share stories and experiences and perspectives, and feel like we’ve learned something. Whereas there are people who have shared my hobbies but…meh, not people I really want to spend time around, people who seem lazy or entitled or downright untrustworthy (and I have seen so, so many people form “friendships” that way which then bites them in the rear, because liking the same anime doesn’t mean they won’t steal from you). I think it’s more important to find a friend and THEN find something to do together, not find a hobby and hope you stumble onto a friend in that hobby-space. I’ve also met many people who, therefore, get so into their hobbies, while looking for friends, that it actually prevents them forming friendships; they have no time for it in between all their clubs and activities. Unfortunately, when most people have the opposite perspective, it makes it rather difficult to have mine, as folks won’t even try it.

Mutual respect and trust are essential. Doing things together is important, but secondary.

I have a special friend. I post comments on his web-comic. That counts, right?

If nobody found that creepy, I’ll have to up my game.

You could rewrite it as- “…I put comments on his webcomic, and I stalk his parents house,…at night.”

How to make friends as an adult? Damned if I know. I do know, though, that sometimes it just happens.
But it’s unlikely to happen if you don’t meet each other, so you have to meet enough people that you encounter the few that might be your friend. That’s difficult in the covid times. Any event where you are likely to meet a lot of people is also likely to be a plague-spreader.
And although instant-on friendships do happen, just like love-at-first-sight happens, it often develops more slowly over time, so it helps to be in a group that meets repeatedly.
Right now, just meeting people is difficult.

The way I meet new people is almost always through other people I already know, group activities like that furry club, volunteering, or sports. When you don’t like to go out, it’s essential to find someone who does to drag you out of your comfort zone long enough to socialize. Unfortunate for me, most of my friends now are fellow introverted people, or they live just far away enough it’s a hassle to meet up.

It always seems like big girls are the freakiest… heheh. Reggie’s a lucky bastard, that’s for sure.