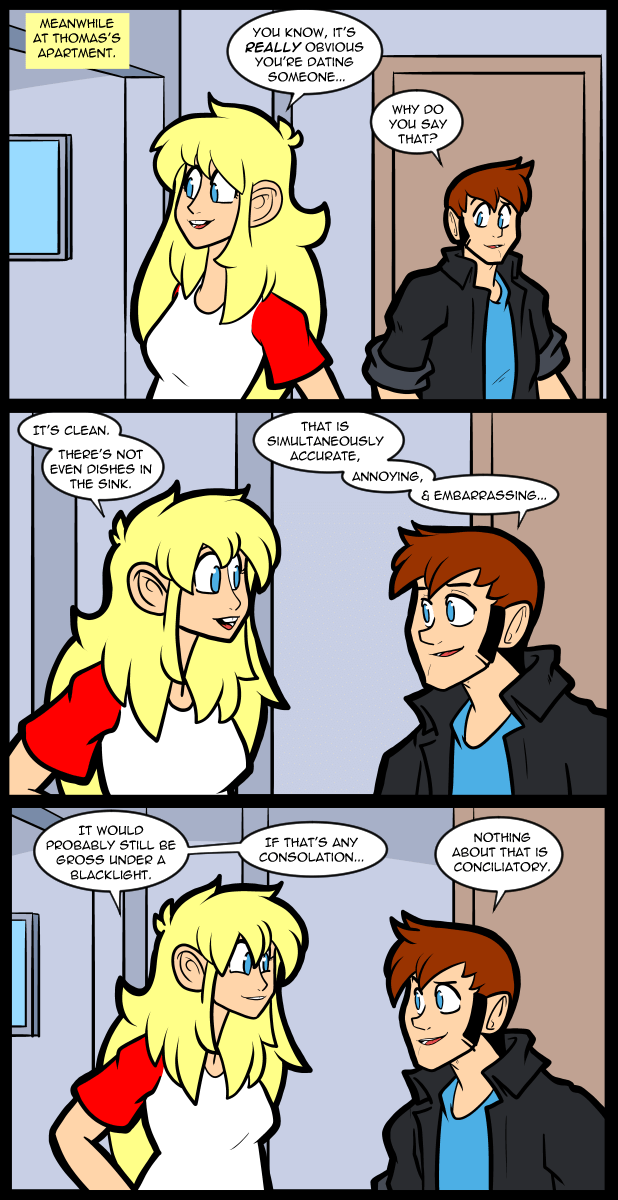 There was actually a few versions of this punchline. The first version had two parts & would have worked better in liVe action. I sometimes forget to write for sequential art instead of video. I talked it over with Shane & we decided that this was the best line to use. It’s sometimes hard to make decisions like this, but an easy decision is to support creators you like monetarily. On sites like Patreon. Especially me. Because I’m very tall.

Yesterday I learned how to use the perspective tool. Well, started to learn anyway. I’ve never been able to quite figure it out, but I think I kind of get it now. So I drew in a nice background. Honestly you shouldn’t really notice it, but if you don’t then that’s good because it’s meant to blend in as a normal not noticeable thing. Now that I have a bit of a grasp of how it works I think I can just freehand backgrounds now… Guess we’ll see.

Out of curiosity, what makes dialog better for sequential art vs video?
Is it just wordiness, eating to much space?

If a joke has two parts, for example, that require different expressions to sell each part, you have to make another panel, or inset, or whatever, to sell each part. In video you can stay in a wide shot, or close up, or whatever, but it doesn’t require you to actually give the performance space. Also it’s easier to give wordy exposition, speeches, or whatever, because you don’t have to allocate visual space to the words. You can still do it in comics, but it gets cluttered unless you give the words space enough. Again you also may need to give more panels for acting to sell the words.

To say nothing of other comedic expressions like beats, which in sequential art requires either another panel dedicated to it, or inflating an existing panel with clutter in the form of reaction balloons. Comedy in sequential art takes more talent than people give it credit for.

On the other hand, it’s great for Chekov’s Guns and Brick Jokes, since they can be right there staring you in the face.

Thanks, I love the behind the scene’s look into things like that.

Interesting, I never thought you were “cutting corners” before, but that background is very nicely done!

I don’t know about [cutting corners], but I’d LIKE to go around Nina’s curves!

Now there’s a tangent with near universal appeal ;-)

I’d do more puns about measurements, but I don’t want to get obtuse.

I really like what you did with all the art on this one. The linework on the characters, their proportions, facial expressions, it’s all very lively. And I was gonna mention the background is extra elaborate today, but not in a jarring or intrusive way. Then I read the blog and all made sense. It really worked smoothly yet effectively. Kudos!

I liked Thomas’s look in panel 3. That looked new, nice.

I missed these two, glad to see them again! I know it was not too long, but still…

Perspective is just mathematics. My father taught me perspective. It took me a whild of using it until I realised its precision seemed mathematical. I told him that, and he replied that it was the branch of math called projective geometry, discovered by the great Renaissance artist-mathematicians.

Later I took a high-level course in projective geometry at university, and it had been generalised beyond recognition into weird algebraic stuff that was of no use whatsoever to art. Well, maybe it could be used on a universe where there was no number 1 and addition did not commute, but that doesn’t seem to be the one we’re in.

That ‘weird algebraic stuff’ is probably underlying the code that creates the tool that Jackie used to do todays background. Did you go further than that in maths? Cause if you realized on your own the mathematics and were able to casually handle upper level geometric projection, it sounds like you have a real facility with it.

That weird algebraic stuff was a lot weirder than needed (or wanted) by 3D geometry portrayal, which only needs matrix arithmetic and homogeneous coordinates.

And yes, I am a mathematician, but have spent most of my life working with computers instead.
I’ve been told one of my professors once predicted I’d be one of the top 50 mathematicians in Canada someday, but that never materialised. I’n 74 now, so it’s safe to say that if it really was to be it would already have happened.
Two things got in the way — attention deficit and hyperfocusing on computer programming instead of inventing concepts and proofs.

If I may ask, what was the rendition of the punchline that would have worked better in video?

I’ll stick the unfinished page up on Patreon when I’m at my computer again.

This joke makes me think of CSI, and all the stains they found using their ‘special light’.

I wouldn’t want to know what was on Thomas’ sink either. My guess would be it’s a little bit Carol, a little bit Thomas, and potentially a little bit Dawn, depending on how long Thomas has lived there. Ewww.