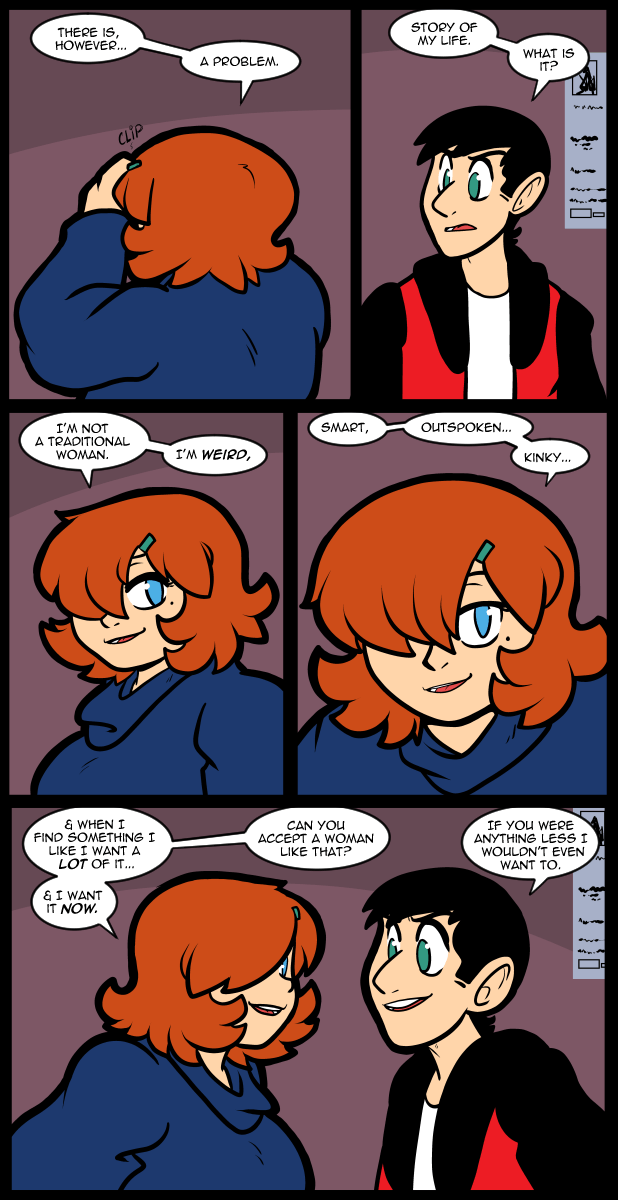 It has been my experience that women use words like kinky as a selling point, without there actually being anything behind it. This interaction is a rare example of a woman underselling exactly how weird she is. Of course, by internet standards Alex is actually fairly tame, but in Reggie’s world she’s completely foreign. Little does he know that his sister is at least as odd, but that’s as may be. Reggie at least is open to the idea that weirdness might be something he could get in to. He may be a little judgey about it, but in pursuit of someone he’s very interested in he may well be able to adapt. He doesn’t actually know himself very well. His general lack of introspection, & current forays into it, give him an opportunity to learn who he is, or who he might like to try being. In contrast Alex knows who she is & is willing to risk something to find out if who she is might be accepted by someone who might, potentially, really come to love her someday. Ultimately they both hope to be accepted for who they are, even if one of them is beginning to wonder about who they are.

I very much enjoy the way you declined making Reggie the ‘bad guy’, and are showing his growth :) I trust he’s telling the truth, and her comments make him even more interested, well done :)

I think popeye sums her up best. I yam what i am and thats all what i am.

That made me think of something about myself. I don’t even notice mirrors.

I only seem to use them when they are in my face, like the bathroom wall size one over the sink or I have the webcam up and go “Whos’ the vagrant? Oh crap! That’s me. I should comb my hair at least. Is that a poppy seed between my teeth? Ugh.”

I wonder if the meanings of “sweet potatoes” and “yams” vary from region to region. Just like “green onions”, “chives” and “scallions”.

As the quote goes

I like the word Futurama used for it: Scaroused

That one falls under Brannigan’s Law.

I know in the 2017 Wonder Woman movie the line goes “I am both frightened and aroused.”

Also, I get a strong Gomez and Morticia vibe from these two. Reggie seems like he would not only know the definition of sublime, but he’d be willing to try to make her feel like she’s the most sublime creature on earth.

I really like this little exchange. Also Alex putting that hair clip to get an eye to show like that is really good.

Heh her turning him to the ways of the furry and then outing Victoria as such is now even more a possibility.

But Reggie knows Victoria is a furry, that cat has been out of the bag for a long time already. Ever since the time he went to their meeting, actually. He was able to figure it out because of her perfume.

Oohhh Lord save the poor boy who has no idea how in over his head he is lol!!!

oh god she’s waaaaay too hot under these bangs ahah

As I was told when I visited a small roleplaying convention in Germany in a youth hostel by the boss there:
“You are all nuts, but you are all nice nut cases.”
I can live with that.

Ah the good old days of weekly RPGA LC conventions scattered around the countryside. Never knowing who you would end up sitting at a table with.

OK. Not gonna lie. Little (lot) turned on right now. I love seeing Alex show this side of herself like this is an impressive scene. And more importantly, I love how Reggie handled it. It didn’t get scared or shy and back away. He stepped forward. He may not know what he’s in for, and may even be aware of how unprepared he is. But he and Alex have one trait incommon, when they want something, they zero in on it, and go for it. I’m really interested to see how this plays out.

This, exactly. They discover their common ground, and it’s at the icy summit of an active volcano. Bring it!

Jessica Rabbit vibes right there. She’s gonna teach him how to play Patty-cake.

…and my last comment about Alex “keeping it a bit below the surface”? She has strategically deployed the hair clip and is coming to the surface.

This is the kind of self-assurance I like in a woman. Also, it’s always the quiet ones!

[ Keep it below the surface.]

What does [that] request mean?

But if you want a literal example of the opposite: Maxine Hellenberger from Leftover Soup is a dynamo and a sweetheart and she doesn’t keep much of anything below the surface.

I haven’t read a lot of the webcomic, leftover soup.
I’ll check it out! :)

Oh man I love how this page came out. Alex has been one of my favorite characters and I actually felt my heartbeat start to speed up as I went from panal to panal. Embarrasing to admit but I believe it just shows how well you made this interaction.

OR being chased by. Rwowrrr.

I had a gf once who was timid and unimaginative (yes, I did suggest a lot of new stuff to try), but who seemed to think that she was some kind of sex goddess. She was also in the habit of using the word ‘seditious’ when she meant ‘decadent’, the words being closer to antonyms than synonyms, mostly because ‘seditious’ sounds like ‘delicious’ was my guess. It was not her most endearing quality.

Ah, the wonderful feeling of someone being excited with you. I think I’m too smart, too kind, too weird for my own good. And no, NO idea where who express myself other than in my head and with my art

Kink-shaming has done us a world of hurt. All the research shows we are, most of us, up for one, three, or five kinks, … fear of others condemning us is a real buzz kill.

Fear is the mind-killer. Fear is the little-death that brings total obliteration. I will face my fear. I will permit it to pass over me and through me.

If only I was able to fully overcome my fears – also to grok others.

This strip leaves me nostalgic for the good old 1980’s, when things were so uncomplicated. In this case “Weird” meant that she was capable of having her own opinions and “Kinky” meant that she enjoyed sex and was okay with that. A pity that was spread out across three different girls.

as long as things don’t go this far south (pun intended) next Christmas should be ok.

Funny christmas song. Nothing like my family’s christmas, but getting together again is much desired.

Whoa! This girl is good.

Woof, wasn’t expecting that. I can dig a woman who is confident and knows how to use her wiles.

Oh yes she is good.