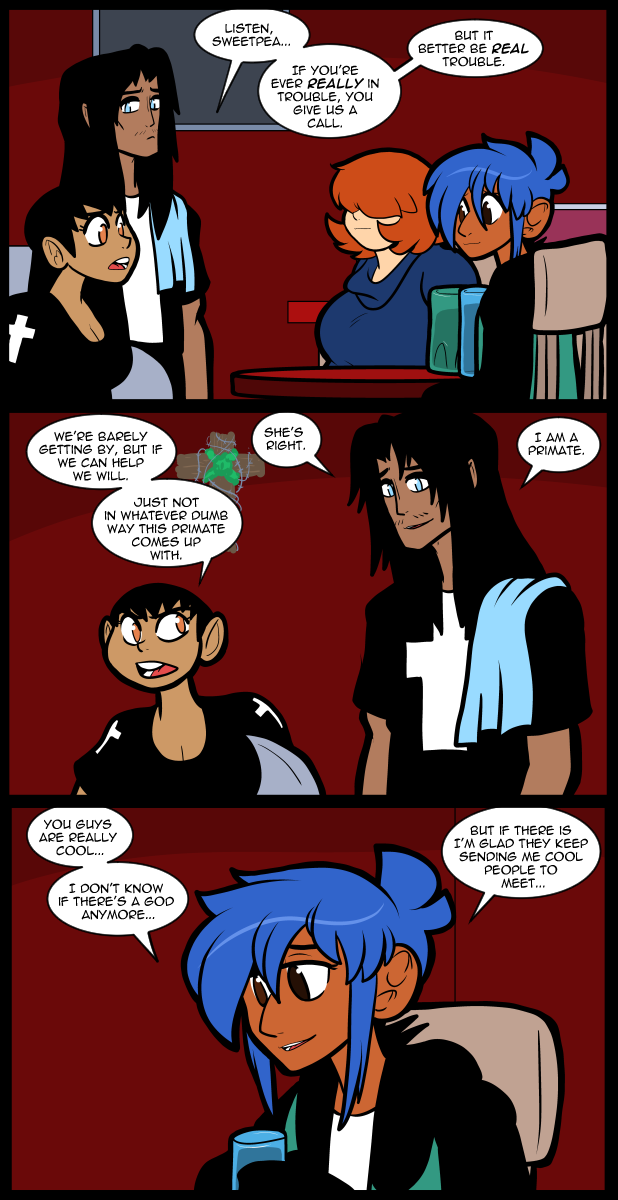 Evrina & Ramon are a strange pair, but they do seem to work together. Underneath the things that make them different is a core of wanting similar things. My father’s philosophy, boiled down to its most basic form, is get out & do some good in the world. All of my best successes have come from things I started in the interest of helping others rather than myself. Even this comic, believe it or not. I don’t know if there’s any karmic force behind that, or if trying to help naturally brings god things to you, but that’s my anecdotal experience. My father also often says that when they nail to lid shut on you none of the money or things you’ve got will help you anymore.
My father’s side of the family is, or at least was the last time I checked, very religious, but I always respected their talk because they backed it up with walking the walk. Going to far flung places to dig wells & talk about Jesus is putting your money where your mouth is. Which isn’t to say that people who do that sort of thing are always good either, but I feel like I can say that my relations are at the very least.
Ramon is basically a representation of what I think the best kind of religious people are like. A distillation of people I’ve met who sincerely believed that the will of God, in whatever form, was to help others first & foremost. There have been times where people might have assumed that I’m anti religion, or whatever, but much like everything else, I’m kind of floating around some middle ground. I’ve known religious people who I would absolutely trust with my life & religious people I wouldn’t turn my back on. You just have to judge people based on their actions & muddle through as best you can.

Your dad sounds like the best people. I wish mine had been like that, instead of telling me for most of my formative years not to be friends with certain kids because they couldn’t do anything for me.

I don’t subscribe to any particular faith. I’m open to the idea of higher beings i.e. gods existing, but I don’t believe that any one being is responsible for everything. That said, I’d never tell someone that their faith is false, either, because I don’t know. If they choose to believe, it doesn’t harm me or inconvenience me unless they try to push it on me. Even then, they get warnings.

Humans are primates, so then Ramone is a primate. :)

But- one guy says that bishops are primates.
If Ramone thinks that he’s a bishop, then we KNOW that he is nuts. :D

There was once a situation — I have no idea what — in which a bishop met a ape. Maybe at some ‘green’ nature celebration? Anyway I think it was the bishop who cracked the joke about both of them being primates.

And I suppose- the ape, not wanting to join in such silliness, decided not to reply to that witticism! :D

The best part about religion is that it encourages people to be their best to those around them. We fall short of that “best” oh so very often, but we’re only human. This scene is impeccably written, it’s great to see more of Evrina and Ramone as their perspective is so different from the rest of the cast.

That’s my test for a good religion — are the believers their best to those around them.

There’s a theory about Abraham and Isaac — that it wasn’t a test of Abraham’s faith in God, but of God. Any god that would really have had Abraham sacrifice his son is a god not worth worshipping.

Gotta say, Ramon would make a GREAT Frankenstein’s Monster. Just his height for starters, but also his haircut, just Wow. Perfect costume. But how ironic would the costume be for Ervina to go as a Druid priestess?
Gah, so many ideas!

If we are talking Halloween costumes I think he would make a decent Lurch or Herman. Definitely a Herman.
As for the rest of the cast ….Hmmm …. maybe go with The Munsters to cover the whole cast.

I’m always gonna try to be the good side. I have had a hard life, BUT! I also think that I was given a hard life because I can handle it, not find it so hard, and still find the good.

I generally disapprove of religion, too many terrible things done in it’s name.
But I admit are some very good people doing very good things under the name of religion as well.

Religion rrlies on an ability people have to believe what they are told. And to use language to talk about imaginary entities as if tgey were real. This has bedn fundamental in establishing cooperative human societies. One of tge imporyant such entities was the exchange value of money. Another was religion.

It’s obvious that such a facility can be used for good or for evil.

I always find it funny when any character wonders if there’s a god. In my universe I couldn’t tell you but in a work of fiction? Yeah. It’s the person who writes/draws/sculpts things.

That Kurt Vonnegut was both an atheist and a god will never not be funny to me.

Welcome to the Monkey House!

Your description of good religious people reminds me of much of my mom’s side of the family. On the other hand, reminds me of the other ones https://somethingpositive.net/comic/a-haunting-we-will-go/ who think their faith justifies any type of negative garbage.

I think religion is like a symbiotic disease. This is not necessarily a bad thing. Those who are happily religious, but are trying to infect everybody are okay people. It’s the people that try to homogenize everybody around them that causes me strife.
So my warning signs are:
– Constantly tells me how great their religion is.
– Claims their religion is the only true religion.
– kills others in the name of their religion.

Dang it. Those who aren’t trying….

So it’s my first time reading the comic, and when I first saw Alex here, I thought she was Carol, just redesigned.

All humans are primates Ramon.