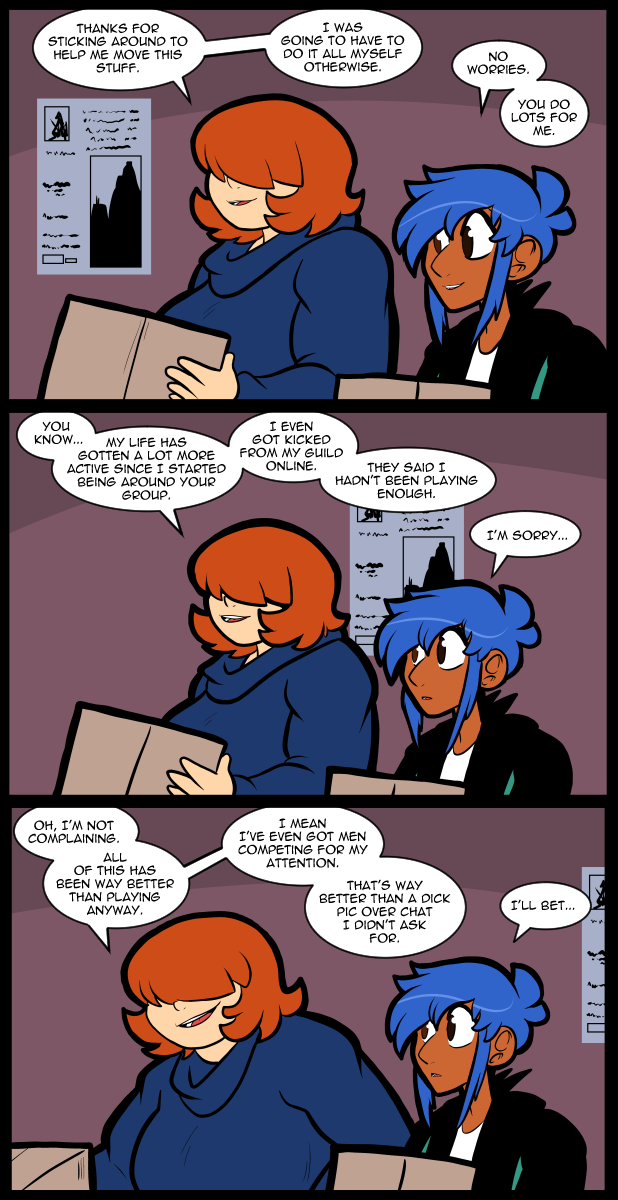 Storm’s a goin’ outside. Quite a blow. Trees losin’ branches & that.

At least one person wanted to know how to join the discord server. You can either become a patron via Patreon & follow those instructions, or email me via the address listed on the site info. (It’s just the site’s name as a single word at hotmail or the same with comic tacked on at gmail) I have made it relatively difficult to do because I find it keeps out the common rabble. XD

If you don’t join via patreon you can’t access the super secret member’s area, where I post what I’m making for patrons before I actually get around to posting it. Also other stuff. It’s only for those with the most refined tastes.

She used to get dick ‘picks,’ now she gets to pick the dick.

Low humour aside, I’m hoping for a Reggie pick.

Low though it might be, I wish I had written it. XD

A poem, by a girl I was acquainted with back in high school:

Rick the Pict,
had a slick, quick,…

So the chick will pick a man instead of receiving the quick, sick, tricky dick “picks”. Which seems like what John would do…

I agree that Reggie o’er John.

On a side note: why is it we never see Alex’s eyes? I heard a rumor that all straight men you have gazed upon it have become bewitched.

She is probably protecting the world = ) but check here /comics1/2143-basement-dweller
She has blue eyes.

Curse my continual poor-ness and my inability to market what talents I do have.

Otherwise I could join the super-secret server

You can just join the regular areas.

Is she supposed to say, dick pic, in the last panel?
I’m asking because sometimes I get confused about grammar.
Words can be tricky for me.

On second thought, looking at the web, I guess you can spell it either way.

Uh, yeah.
I’ll bow down to your superior knowledge of slang words for penises, or something. Wha?

Respectfully, there are some discussions between Jackie + I that don’t need a third party’s assisatnce.
Please consider this option.
Later tater.

I’m sorry about the above reply.
I recently had some distant, almost never call me, relatives staying at my house.
That experience put me in a very sour + prickly mood.
I’m sorry. I’m not usually as crabby as that.
Best wishes.

Kicked out of a guild! (I’m a not-young who only knows what a guild is by reading comics on the internet.)

Alex has the air of “I wasn’t expecting this. but I welcome it” about her.

Some of the more competitive ‘raiding’ guilds have a minimum attendance requirement for continued membership. Which is something explicitly spelled out.

I think it is more along the lines of “I was kind of expecting this, but now that it has happened, I find myself less upset about it than I thought I would be”.

A surprise to be sure, but a welcome one.