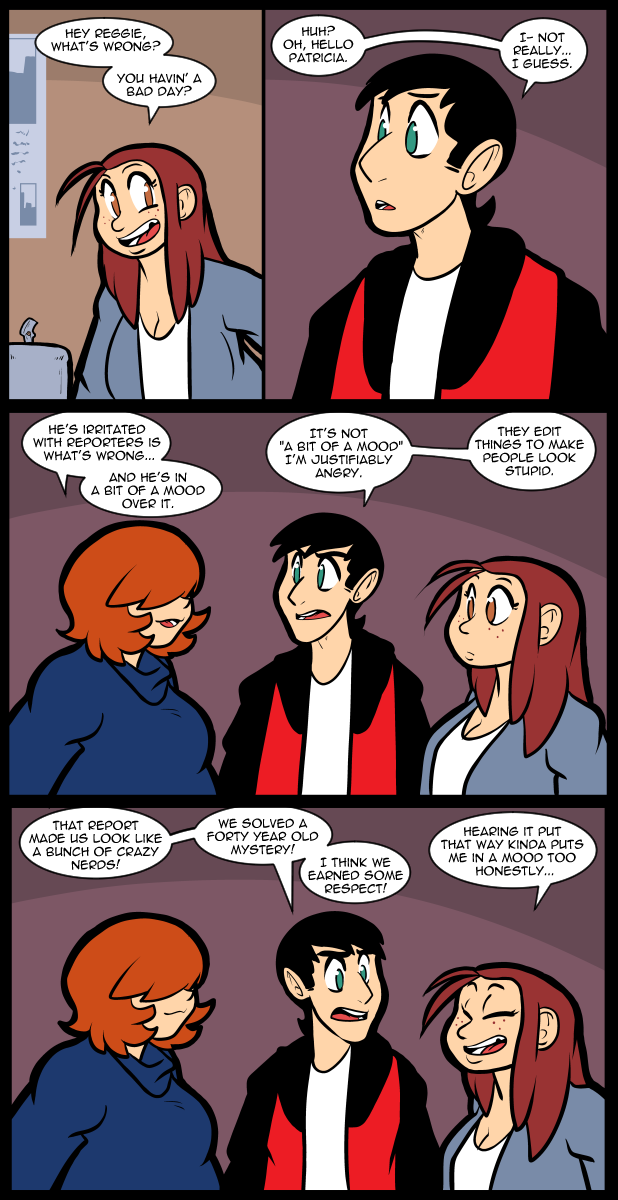 I think Patricia gets along easily with Reggie because his personality type is so common with nerds. Just sort of baseline irritated with everything all the time. So she knows not to take it too seriously. It’s misdirected anger almost all the time. Alex gets along easily with him because her best friend is basically the same personality as a girl, but turned up all the way.

Evrina & Reggie clash because they’re really similar. It’s kind of like in Futurama where whenever the characters met different versions of themselves they never got along. You get irritated more by the flaws you see in yourself.

I used to have a problem with my friends not getting along with each other because similar kinds of people always seemed to gravitate to me, but they didn’t like each other. It makes for a difficult sit down meal let me tell you. It kind of led to me having little cells of friends that were set up in similar groups that could get along, but couldn’t comingle.

And Reggie’s ego makes an appearance as he can’t stand not getting credit for solving a mystery. Someone give him a gold star to make him feel better about himself.

If he got one that would be a second of the series. The first one was back awhile ago.

Over six years ago in our time:

All I can think of is how Reggie’s jacket reminds me of Negaduck. All that’s missing is a yellow shirt.

Part of the solution is to boycott it. Don’t watch. Don’t get involved. Let it dry up and die of its own irrelevancy.

You bet.
I feel something like that about TV sitcoms.

Their formula is- the script is only 1] a joke line, or 2] a straight line.

So, IMO, since TV sitcoms are that bad, I don’t watch them anymore.

Or more to the point-
The scripts are only full of: choice 1], and choice 2].

Or just watch PBS Newshour. Since the station is publicly funded, they can’t show political bias.

This isn’t new. TV news at its best was never much good. Traditionally, they got most of it from the newspapers. All my life I’ve been bitching that people say they get all their news from TV, but there’s never been any news on TV.

That little smile from Alex in panel two makes me think her interest in Reggie is still on-track.

…but what’s in the little safe? he wondered aloud.

You don’t need to know what is in the safe. These are not the papers you are looking for. Pay no attention to the man behind the curtain. And yes, Toto, he is in Oklahoma, Not Kansas.

…But if you wreck the box, then it’ll be UNSAFE.

I’m a big fan of your brain.

I’m glad someone is.

I can’t help thinking,”Sandwich!” If this is unclear, rest assured you’re probably better off.

I have a friend who keeps telling me “I’m not who you’re angry at and I don’t want to hear you yell at me for it” and I’m like “I’m not yelling at you, I’m upset and my tone is upset but it’s obviously not at you.” But he doesn’t like it. Misdirected anger is indeed the name of the game :P