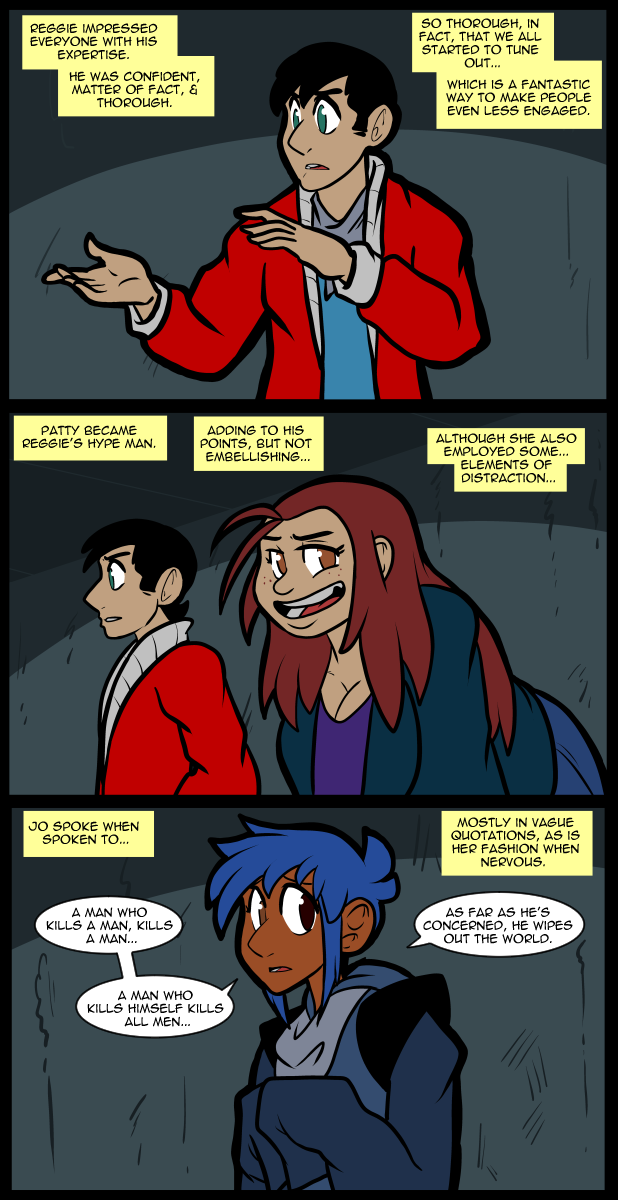 I was going to try & use a quote from a movie with a suicide in it, but I couldn’t for the life of me think of one. The only examples I could think of didn’t have pithy phrases that worked. Even this one isn’t succinct. It’s just sort of pertinent to the topic, but not really completely applicable in every sense. That said, given the information I presented in the narrative I think you could safely say that the guy wanted to die because the world no longer had any value that he was capable of perceiving. That’s the thing about life, sometimes you lose the ability to see the value in it, or the hope for a better day. If someone isn’t there to help you in those moments, well… There are thousands of them a year. I’ve been on both sides of it. When you’re trying to convince someone that life has value it is extremely difficult when you are wondering if it actually does. There is a conflict of interests.
The man who said what Jo is quoting is G.K. Chesterton. His name suits his face. Look him up if you want verification. I’ve heard the quote in a few films & tv shows, but almost never with the final line. It’s also never attributed to him. You may actually be familiar with his work. He created Father Brown, the detective, which has been adapted in a few ways over the years. I don’t actually know the full context of the quote. I expect there might be more to it that could alter the understood meaning of it, but that’s a chance you take with quotations.
A few years ago a lady became interested in me who was very prone to suicidal thoughts & I knew I had to shut it all down eventually because adding me to her life would be like throwing a match into a can of gasoline. The whole thing was a double suicide waiting to happen. It’s important to properly appraise your role in a relationship & what strengths and weaknesses you bring to the table. I’m less melancholy than I was in my youth. Less than even I was 5 years ago, but I still have intense moments of crushing dread. In some ways I think that living through it for so long I have become somewhat numb to the brain chemistry that causes the problem sometimes. I’ve built up an immunity. Or maybe a resistance would be more accurate, I can resist depression more effectively now. I have more tools in my arsenal. Long time readers will remember some of my intense bouts of instability I’m sure. I’ve spoken at length about my methods for coping with depression, and everything that comes with it.
It all basically boils down to work. Find a purpose, even if it’s very small, and build from it. Become indispensable to someone, if not in reality, then in your mind. Some days when I don’t want to get up I imagine a reader coming to the page and being disappointed. It may seem like a small thing, but it really bothers me that I could have a chance to make someone feel better, if only for a moment, and I missed it. Creating joy, or easing pain, are the best things you can do. Life is so hard. Giving someone a chuckle, or even a smirk over a labored pun, is a worthy goal. Because in that tiny moment you can change the trajectory of someone’s life.

“You see I didn’t plan it like this. My dumb dad got me this shortwave radio set so I could just talk to my buddies back east. But I couldn’t reach anybody. So I just imagined I was talking to nobody, I imagined nobody listening. Maybe I imagined there would be one person out there… And then one day I woke up, and I realized I was never going to be normal, so I said, “F*ck it.” I said, “So be it.” And Happy Harry Hard-On was born. But I never meant to hurt anyone. I never meant to hurt anyone. I’m sorry Malcolm. I never said, “Don’t do it!” ”

Patty’s element of distraction being… her cleavage? :D

Every little coping mechanism adds to the arsenal.

…not that anyone wants the police listening to your story with any more than occasional engagement. The better to get you out of there faster with a “Clearly a suicide; no need to investigate further and discover that the joint has been looted, possibly by you.”

I am one of those people who has suicidal thoughts almost constantly. I am approaching 70 so whatever kicks people over the edge from thinking to doing, has thus far escaped me. I still plan on leaving when there is no longer anything that brings me joy. I used to derive great pleasure from walking. I can no longer walk for more than a few minutes now. But I still get great joy from playing my guitar and a few other things. I have found joy in some things I did not expect to. Once all the joy is gone I will follow. And on that cheerful note I will leave complimenting your ability Jackie to weave a story that begs to be read. Your comic is one of the joys in my life BTW. No pressure though. :)

I appreciate Rulette’s ability to deploy her distractions.

This question is from a redhead with freckles: Is it a trope that three freckles in a triangle on each cheek (shoulder, etc) represents “freckled person” in a comic?

I thought Jo might be quoting Chesterton! That quote was from Orthodoxy, Chapter 5. The slightly extended context (slightly just because Chesterton is very wordy) is: “Not only is suicide a sin, it is the sin. It is the ultimate and absolute evil, the refusal to take an interest in existence; the refusal to take the oath of loyalty to life. The man who kills a man, kills a man. The man who kills himself, kills all men; as far as he is concerned he wipes out the world.”

Fascinating read, as is Heretics. Both were also apologetic works—based on what I’ve heard, his apologetics were actually an inspiration for those of both C. S. Lewis and J. R. R. Tolkien.

Indeed, I do look forward to your story and I would be very sad for it not to be in the world. Sure, not the Beowulf, nor the Romeo and Juliet, but hey, one of the richest and nuanced set of characters on the web, and It will stand well versus any arguments against.
And your struggles are our struggles to a large degree, although some may have better success with Their meds than you Might have had. Dunno.
My advice: find your passion and lean hard into it.

I know of G. K. Chesterton because I have often seen “Chesterton’s Fence” quoted.

Briefly, he said: suppose there is a fence across some road. Some reformers will say “I don’t see any use in this fence, so let’s tear it down.” Chesterton noted that someone put the fence there for some reason, and it is a good idea to understand the reason and decide whether it’s a good reason, before taking any action to tear down the fence. In summary: make sure you fully understand a situation before taking any action to change it.

IMHO this is a very good principle to keep in mind.

I hadn’t heard that one, but I remember he gave a similar example with a lamp post in Heretics. A brilliant, brilliant man.

The full quote Jo’s making I can’t recall, but the tone of it is suicide as the ultimate expression of sin. Total selfishness, disloyalty to the very concept of life, and a lot of other flowery language that the punch line “a man who kills himself kills all men” really quite nicely summarizes. Its from one of his big apologist pieces.

… i do not know why my comment posted as a reply to yours.

“Hell of a thing, killin a man. Take away everthin he’s got, an everthin he might’ve had” Close as I can remember to Clint Eastwood’s character in Unforgiven.

I also think that-

using your art, or creativity, or goods, to make [someone smile daily, or even weekly], is a good goal to have.

Chuck Jones was a cartoonist who helped to make the 1960s TV show: The Grinch Who Stole Christmas [R].

Chuck had a story about a kind uncle, who helped him inspire himself, to go for a job in cartooning. This is kind of what Chuck’s uncle said to him:

“I shouldn’t do this! I have no art skills at all. You can’t make a pig into a RACE HORSE.”

[Uncle]- “Maybe you can’t…but you can become a very fast pig.”

“Now I will destroy the whole world”.

In most cases, suicide damages several generations of a family. It this book (a highly recommenced read) the Bokonist saying is more literally true.

On average, since the urge to kill myself isn’t so strong that I actually kill myself, the world is worth living in.

—Tao Lin, the author of the 2009 novel: “Shoplifting from American Apparel”.

” Nothin’ for nothin’–everything’s right at your fingertips–for a price
Who ever said that life on this planet would ever be paradise
I say–don’t throw it away, you’ve got too many things to say
If you throw your life, if you throw away your life . . .
The world will never be the same ”

Don’t you know
That everyone around you
Has felt the pain you feel today
You’re out of control yeah–and you want someone to tell you
When you wake up in the morning it’ll only be a dream.

-From the song, “Out of Control”, by Oingo Boingo

I still haven’t forgotten back when you talked to a random obnoxious 23 year old on skype, in the middle of the night, who thought he wanted to kill himself and wasn’t sure if it was worth it.

I’ve done that so many times I should volunteer for a help line. I hope the extra time in earth has been worth it for you.

I can’t say I regrete making it this far. As far as I can tell, my best years are still ahead of me, so thanks.

I’m glad I was able to help a little bit.