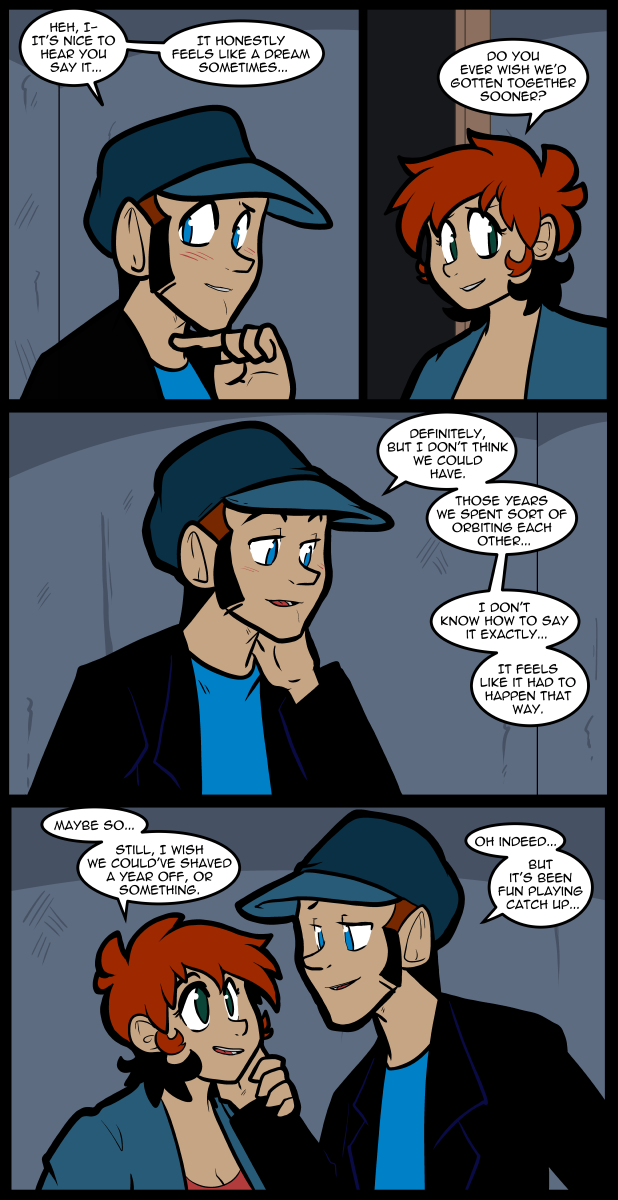 This is one of those pages that has been in my mind so long I feel like I’ve done it before. It’s very difficult to keep everything straight after 2097 pages. It’s something that people who have never created a very expansive work tend not to think about when gleefully presenting a repetition, or error. Personally I don’t mind having mine pointed out, so long as the person isn’t a dick about it, but our culture has taught many people that spotting an error is a far greater achievement than it is, so they love to rub your nose in it. Of course the beauty of a webcomic is that you can go back and edit thing years after the original publication like you’re George Lucas forever tweaking Star Wars. I absolutely understand that urge.

I only point out your typos in an effort to be helpful! Not to rub your proverbial olfactory organ in it.

I FOUND AN ERROR! MY LIFE HAS MEANING! I AM THE ERROR-FINDER!! AAAAHHAHAHAHAHA!

Hopefully we’ll get to 3000 and everything will be golden. And some people just need achievements in life, even if that achievement is pointing out someone else’s fault.

“And then came the ugly afterbirth. The first art critic.”
– Mel Brook’s History of the World.

And the indelible image of the Art Critic, p*ssing on the just finished Lascaux Cave painting. I laughed cause it caught me off guard, I cried, then, because it’s true. Critics pi** on what we love.

About criticism and dealing with It:

When the flush of a newborn sun fell first on Eden’s green and gold,
Our father Adam sat under the Tree and scratched with a stick in the mold;
And the first rude sketch that the world had seen was joy to his mighty heart,
Till the Devil whispered behind the leaves: “It’s pretty, but is it Art?”

Wherefore he called to his wife and fled to fashion his work anew—
The first of his race who cared a fig for the first, most dread review;
And he left his lore to the use of his sons—and that was a glorious gain
When the Devil chuckled: “Is it Art?” in the ear of the branded Cain.

They builded a tower to shiver the sky and wrench the stars apart,
Till the Devil grunted behind the bricks: “It’s striking, but is it Art?”
The stone was dropped by the quarry-side, and the idle derrick swung,
While each man talked of the aims of art, and each in an alien tongue.

They fought and they talked in the north and the south, they talked and they fought in the west,
Till the waters rose on the jabbering land, and the poor Red Clay had rest—
Had rest till the dank blank-canvas dawn when the dove was preened to start,
And the Devil bubbled below the keel: “It’s human, but is it Art?”

The tale is old as the Eden Tree—as new as the new-cut tooth—
For each man knows ere his lip-thatch grows he is master of Art and Truth;
And each man hears as the twilight nears, to the beat of his dying heart,
The Devil drum on the darkened pane: “You did it, but was it Art?”

We have learned to whittle the Eden Tree to the shape of a surplice-peg,
We have learned to bottle our parents twain in the yolk of an addled egg,
We know that the tail must wag the dog, as the horse is drawn by the cart;
But the Devil whoops, as he whooped of old: “It’s clever, but is it Art?”

Now, if we could win to the Eden Tree where the four great rivers flow,
And the wreath of Eve is red on the turf as she left it long ago,
And if we could come when the sentry slept, and softly scurry through,
By the favor of God we might know as much—as our father Adam knew.

This poem is in the public domain.
Rudyard Kipling

There is a reason Mr. Kipling is famous – he produced a good product.

Thanks for sharing with us.

(“Who is Art?” “You know: the guy who used to sit behind you in Geometry.)

Rudyard Kipling certainly had a way with words…and an understanding of the human condition, something people actively try to forget in this day and age.

he was such an insightful fellow. some time, i’ll have to look him up to see what hells he traversed to become so.

The way they’re talking here sounds very deep and connected, like they’re in it for the long term. After awhile a year at the beginning will not matter.

i got the impression that at least he’s older in spirit than that. some people are just like that… knowing despite not having the chronological advantage to show for it.

The middle panel… been there, felt that.

Same here. I say to my wife that when we first met 20 years ago, I would have been a bad husband if we’d gotten married then. Then we reconnected seven years ago and been married for six, and my brain is in a much much better place than it was then when I was a real asshole.