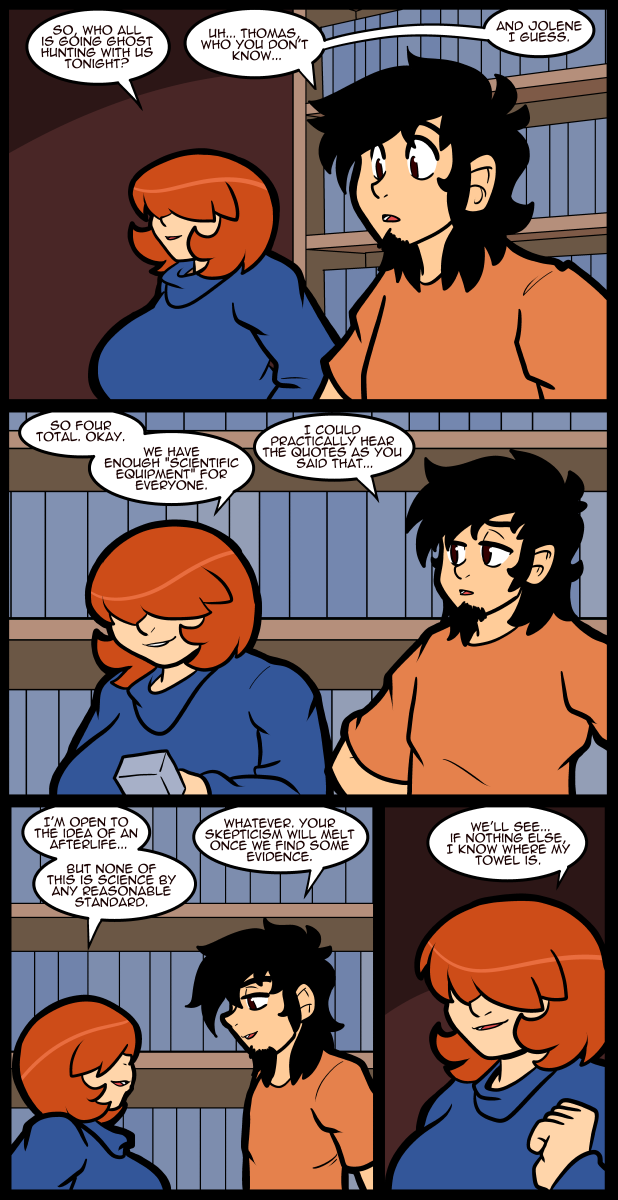 This bizarre scene may seem totally alien to younger readers. These are two people with ideological differences willing to listen to each other. They may as well be unicorns in this day and age. In addition to that, one party is willing to humor the other. Please suspend your disbelief for these tales of the uncommonly reasonable! You’ll gasp in amazement at people being kind, and getting along! You’ll gawk at people who are different from each other not bringing it up every two seconds! You paid for the entire seat BUT YOU’LL ONLY NEED THE EDGE!!!!

Is that a Hitchhiker’s reference I see?

Always having a towel within reach is surprisingly useful in real life, hence why I have a towel wrapped up army style inside my shoulder-bag, it has come in handy on a number of occasions.

Is that a real shoulder bag, or is that a Sears shoulder bag? … Or is it a shouda-bar as in “shoppo-diggo”?

Shouda-bag. The question is: shouda-bag as in shoop-diggo? I hate autocorrect esp. before coffee hits the blood stream.

I hope so, because otherwise she’s just being gross.
…
Pretty sure Zaphod Beeblebrox would be proud either way, though.

I also hope it’s a reference, but if not I just assume it’s to clear up her melting scepticism, rather than her being gross…. but then maybe I’m being generous with all this benefit of the doubt I’ve got lying around >.>

That’s quite the nice benefit. Sounds like yer a froob dude, knowing where your towel is. Very important. I like Ford Prefect’s idea about getting beer!

Well, she does own a library and is very well read. It would be an incredible coincidence if it wasn’t. Speaking of coincidinkies, I just recently started re-reading the series, so it’s a nice tie in.

But…but I bought my seat WITHOUT an edge! There was a discount!

Where will I sit now?

You can use the back of someone else’s seat.

I hope they get to use the Spirit Box! :) I love seeing that device getting used in paranormal investigation shows! :)

I favor the infrared cameras, myself. Seeing a big cold spot that looks like a dude running at you is all sorts of creepy.

I totally forgot about this subplot! I really hope Reggie joins up! I live for an awkward love triangle and you’ve teed this one up perfectly! All three are such unique characters and I’m eager to see what happens!!

Did anyone else think that Alex was saying things with innuendos in them?

As in- Alex was thinking that the four of them could get together, and use their “scientific equipment” on each other?

Whenever Alex is around John, I assume she’s low-keying high-brow innuendos on a regular basis. Even when I can’t always spot them.

Yes, to the former. I now expect everything Alex says to throb with innuendo. The tower, however, speaks to a different innuendo altogether.

WHOA. Alex is looking GOOD on this page.

I mean she always looks good, but the art on this page just makes her look even better then usual. <3

I think she took a little more care with her hair than usual. And yes, she looks damn good. :)

This is wholly unrelated to the strip–well, maybe only mostly–but has anyone seen the trailer yet on that new Banana Splits movie? I’m somewhere between baffled and horrified and wondering how much connection to Five Nights at Freddy’s it actually has.

I watched the trailer and I just couldn’t shake the feeling that it was a spoof made by a late-show. The voice of the… killer, I guess, reminds me so much of WikiBear…

Okay, I just had to look-this-up-using-a-popular-search-engine and am mortified.
How did these “people” get the rights to the characters in the first place to produce such schock?

The blurb is more than enough to pass on this and maybe sic the IRS and NIMH after them.

A maniac dressed in a dog costume wreaks bloody havoc during the taping of a popular children’s television show.

FWIW, I personally intend to boycott the thing.

EVERYBODY needs to know where their towel is.

You sir, are quite the frood.

Wait a minute…A redhead, wearing purple, going ghost hunting? Did you do that on purpose?