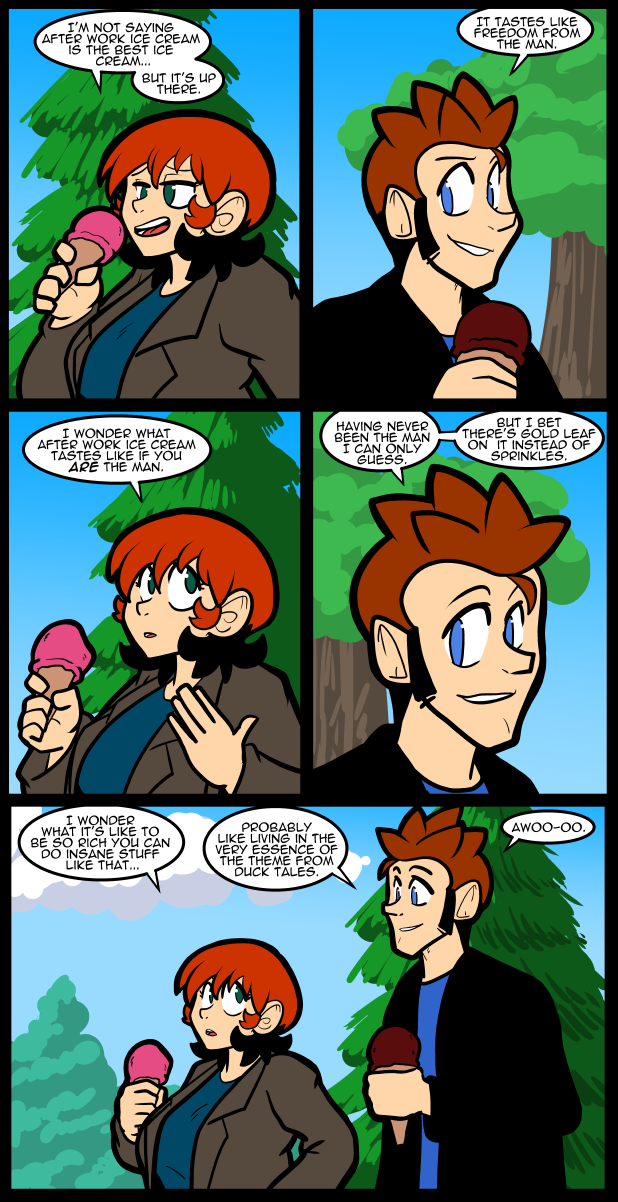 This interaction caused me to look up stuff about Ducktales, which led me to watching the pilot for the reboot. It was remarkably well done. It really made me want to see what they could do with other tv properties from the old afternoon block. The ducktales reboot reminds me a lot more of the comics in so far as there’s a lot of backstory implied. It’s almost like they combined the two continuities into one. I was not really a fan of the original cartoon, but this new version is actually very compelling. The pilot is free to watch on youtube if you want to search it out. The official Disney channel youtube account has it. I trust you have the mental acumen to find it without posting a link.

Considering the “Ducktales” reboot alludes to other series like “Tail Spin”, “Adventures of Gummi Bears”, and even “Darkwing Duck” as taking place in the same universe, they could probably do them justice.

The reboot brought out the ancient fanboy in me. Not only did it reference the original continuity in some ways, from DT and the other shows, as you mentioned, it referenced even more from the original Scrooge comics, of which I am a huge fan. One thing it also did was establish Darkwing Duck as an old, in-universe TV show, of which Launchpad was a great fan. The creators have said though, it doesn’t necessarily mean DD is only a fictional character.

The latest episode gave us pretty much a pilot for an actual Darkwing duck with a fantastic use for the original Darkwing “actor” its nothing short of brilliance.

Only Jim Cummings can make the character of Darkwing Duck work. Yeah, I’m being a fanboy but I truly mean it from the bottom of my heart. Cummings understands Darkwing to a T.

Maybe they should Reboot Reboot. Yes, I know about the live action Reboot, doesn’t count.

My Dad said- for a work, we once was invited to some fancy supper.

Everybody was served the same meal.
Part of the dessert was…maybe chocolate cake with U.S. nickel-sized, thin sheets of gold leaf on them.
He hated it!!!
He said it tasted like…well…METAL, and it felt like you were chewing on tin foil! :(

I’ve seen them use gold leaf on several Food Network shows. The only point is decoration. It says “I’m fancy!” (and maybe rich?) The judges always say it has no taste. Give me a cake that tastes great. Fancy does nothing for me.

I have eaten desserts with gold leaf on them. (It’s a Silicon Valley thing. Go figure. I didn’t buy them myself.)

Anyway, I couldn’t taste it or feel it. It was way too thin.

If it had a noticeable texture, it was not real gold leaf.

Knowing my luck, eating gold leaf would taste a lot like licking a 9V battery.

Gold leaf isn’t very expensive, you can find it on Amazon for ~$12 per 100 1.35″ square pieces. It’s that cheap because it’s beaten so thin that there’s hardly any gold in it, you can practically see through the stuff.

Gold Leaf is beaten till it only a few molecules thick.

For that to truly work, they’d have to get half the actors from Star Trek: Discovery to voice characters!

New Ducktales is nothing short of brilliance. You should get caught up. (I do wonder, though, when the heck is Bubba gonna show up?)
Also from Disney… Milo Murphy’s Law. Weird Al Yankovic as a middle-school student that is the personification of Murphy’s Law. If you’re around him… stuff will go wrong. Everything will go wrong. Even if it seems impossible. Oh, and it’s a spinoff of Phineas & Ferb. The ONLY problem is that except for the theme song, Weird Al doesn’t sing. At all. As Milo or himself.

If there’s any kind of justice in the world, never. Bubba Duck was a one-note joke that wore out its welcome faster than a radiator stuffed with limburger.

Even as a kid, the sound of “Scooge!” made me cringe.

Gold in food is ridiculous. Just a meaningless bit of ostentation. Sure, I can appreciate a good presentation because pretty food looks more appetizing, but it had better be good food, too, or all appreciation is quickly stopped cold. Similarly, putting gold foil on bad food does not make it into good food. It’s just bad food wearing an absurd, meaningless disguise.

Pardon, but what is Daiyenu?

I wonder if Scrooge Mcduck’s nephew’s will get jobs, or will they just hang around with him until college? Hm.