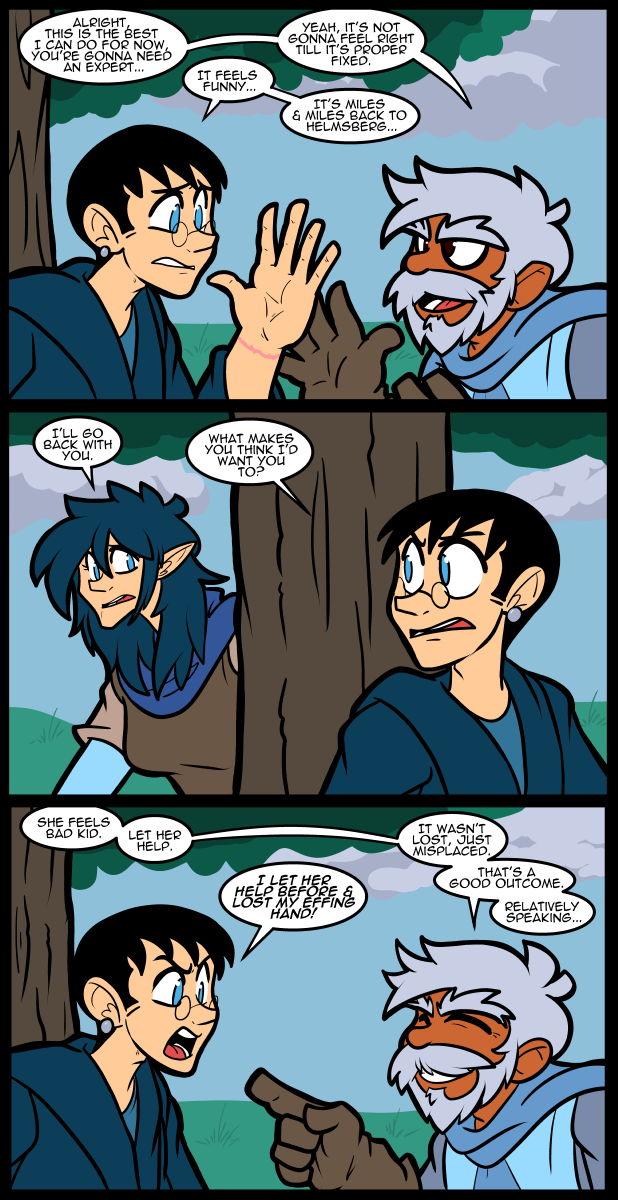 Lann is a little hesitant…

You know in many fantasy cultures, the amputation of a limb is the beginning of a courtship ritual. Some cultures even treat it as foreplay, or a marriage proposal. However, I sincerely doubt that is the case in this instance since most elven cultures frown on the practice of ritual courtship amputation. The reattachment of the hand would also be seen as a rejection of the courtship as well and usually leads to the death of the rejector. All in all a promising start for an adventure should they manage to fully heal the limb.

This gives new meaning to the term, “hand job”

Well that comment wasted a lot of My coffee.
Personally I was reminded of why he might Not want it back: Stanley Kubrick’s Dr. Strangelove (or how I learned to stop worrying, …)

I’m getting a really strong, Papa Smurf-vibe, from Mike’s character.

He apparently got over being on fire pretty readily….

yeah, could’ve been worse
like obliterated, or transmogrified into a tentacle
or worse even, teleported up your a-

“A good outcome, relatively speaking.”
You leave my relatives out of this. You dont want them chosing sides,…
Or REALLY I don’t want them to know there is any other side than mine, I mean – I may have left out some details…..

No need to fly off the hand-le, Ed… XD

Now’s not the time to point your remaining fingers.

She’s just trying to give Ed a hand.

Is that a pun (…because the players are related)?

“Always look on the bright side, kid!” :D

That’s a cut straight through the wrist bones. Good swing.

Out of the many, many stories of disastrous adventures/adventurers from my campaigns, here’s this: A new group managed to raid a wizard’s hidden treasure trove. Two adventurers had been changed to living crystal men, vastly increasing their hits and strength. The mage had acquired a staff of power. One guy was a stupid seven-foot-tall human who had a little person that told him what to do (both run by one player).

The crystal men were able to carry out more chests because of their strength. The oversized human character with his little person friend were basically bystanders when the argument started over dividing up the treasure. Tempers flared, fireballs were launched at pointblank range, everybody died save the two crystal men.

The crystal guys merrily set off into the wilderness with all the treasure (and the staff), until a day later when they returned to normal and died of their wounds. Best of all, the “treasure” was only pebbles with illusions on them to appear as gems and coins.

In the end they learned a valuable lesson about group interactions and fireballs while I laughed for hours.

You, my good sir, are a magnificent bastard. Bravo.

Thank you, I tried! And have been tried by a jury of my peers for having too much fun as a DM. In all fairness to me, I was never a killer DM, but have had killer players (the suicidal kind). I miss my D&D glory days from back in the 70s-80s. It was never the same after that.

Reminds me of a Convention Special Event based on Ghost Tower of Inverness.
It came with a disclaimer, warnings and everything.
We were a mix of strangers and people who knew of each other … kinda.
Yeah we were the leftovers table and were just asking for trouble.
It was a mixed bag with two Elf Druids, two Human Bards, a Human sorcerer, Conehead the Barbarian and my Halfling Rogue [infiltration and recovery specialist].
Stuff happened.
It was messy.
Lots of resources were used.
Nobody but the Barbarian died more than once at most. He was a very unhappy Goblin, Halfling, Orc till just before the last room where he entered as a Bugbear and exited as a Bleached Bugbear. It was the only room he made any of his saves and he made them all and pounded that skull into dust, then pounded the dust into powder and then tried to grind the powder into flour – yeah not a happy Barbarian at all.
[later on HQ certed his Bugbear as a legal character for continued play in the campaign]
At the end of everything the majority of the table was quite despondent due to all the deaths and level loss associated with that – even the treasures that were recovered didn’t help the mood – then at the closing scene – the GM had that evil Cheshire grin that he wore before every gotcha encounter before – restorations were given to all who needed them. You never saw so many open mouthed dumbfounded looks at one table of experience players.

My halfing never actually died, though he did fall down a whole lot being a not so good melee fighter, but got-hit-by-each-and-every-beam-each-and-every-round-of-combat in that last room so of course I was awarded the curse to be permanently colourless with a chance of making anything touched colourless – oh that went over so well – got a special little card I HAD to show each GM at the beginning of every event following at that con – much fun was had by the judges and fellow players at my expense that weekend.

Sounds like a good time was had by all, and particularly the DM.