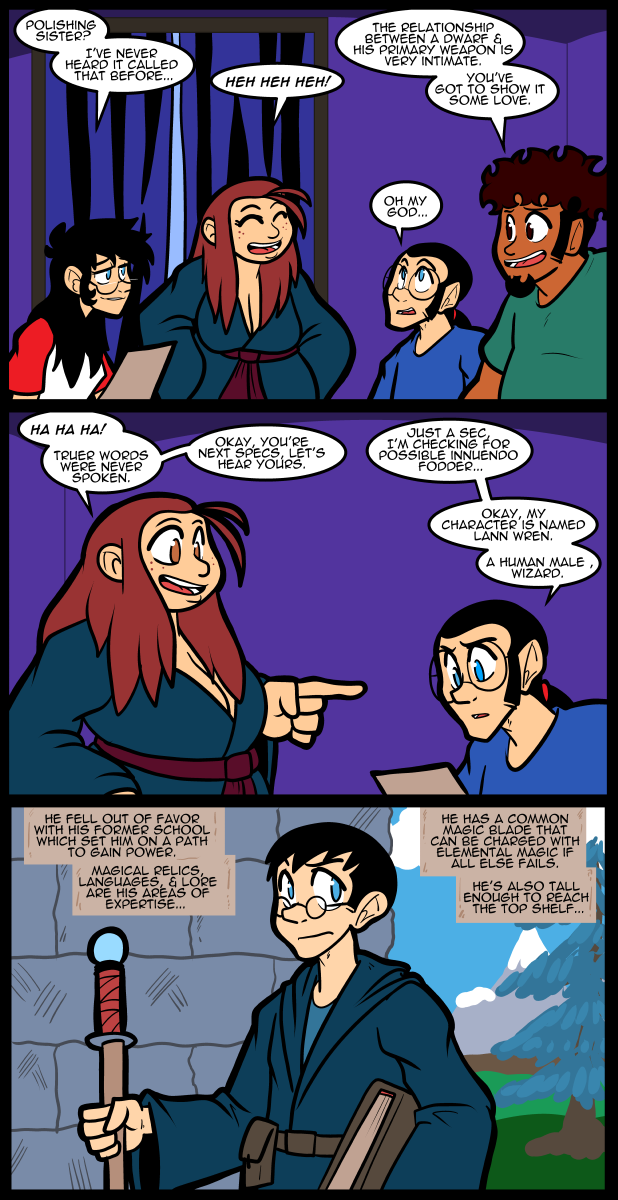 I think it would be safe to say that Ed is playing closer to his type than he realizes.

Lann Wren is the name I used for my first playthrough of Star Wars Knights Of The Old Republic. I was using Farts Buttwhiff as a placeholder name which caused a problem because it was so funny to me I kind of wanted to keep it. Of course Ed would never do that. For a minute I considered giving him a name similar enough that it would make a good insult for him, but eventually decided that I could be stuck with this character for a decade, so I better choose a name I can tolerate seeing for that long.

I’m loving this. Got nothing else to say. Just loving it.

I saw Ed being a monk personally, just that whole confrontation and hand to hand beat down experience. Wizard is good too.

I wanted to defy expectations a little.

He DID say he wanted to play against type!

Nothing wrong with playing a tall PC, Ed. I’m just as guilty.

Though, now that I’ve played 5 male characters, I decided to step out of my comfort zone a bit and play a pact of the blade lady tiefling warlock (still snarky, though). She’s a bit of a reference to Essie from ‘Demon Street’, so her father was a halfling, putting her at a staggering 4’11”. Upshot, she’s an abyssal tiefling which gives me extra spells and a max HP boost.

It’s a ‘super deadly’ campaign, so her Con is 20. And, I recently acquired the Tome of Leadership, so her Char is now 24. It started at 20 and we pooled our inspiration points for a +2 boost to all scores. On top of that, she’s also got the Tough feat. All of that together puts her lvl 12 HP at 196. Her Celestial patron also grants her and 5 allies temp HP after a long rest (no dedicated healer). I’m not really a fan of powergaming, but one of the most common enemy types we face is a homebrew zombie that does necrotic splash damage that can’t be healed w/o Restoration or a long rest.

I’m a truly boring white guy, and I always play a catgirl/she-elf DEX monk. It’s fun to RP a bubbly, slightly ditzy girl who can punch through bricks.

I started out this campaign with a surfer-dude/stoner tortle barbarian. It was pretty fun at first, but I tend to really get inside my character’s heads. Playing a happy-go-lucky character slowly slipping into depression *is not* fun.

Thankfully, he was chaotic neutral, so when he got killed outright by an assassin with Bad News and got ressurected, he peaced out. I replaced him with probably my favorite character ever, Arkin Icewind. A dryly sarcastic silver-skinned Aasimar cleric of Boccob with a Russian accent and the utmost propensity towards doing the right thing. Even if begrudgingly so. When he died, the DM made him a full on angel. And now he’s an NPC.

Hey, I think everyone is guilty of RPing a character from some show or game they’ve played in the past.

My current character is now the Goblin Slayer. I play him exactly like that – quiet, hard to deal with, and super dedicated to killing monsters for the greater good. And obsessed with killing greenskins.

Never played much D&D, had trouble getting groups together when living in a small town, however I did play Neverwinter Nights 2, which did a good job of using D&D rules. My favourite character was a human monk. He sucked at lower levels, but by mid game, he was a very kick ass fighter. I played the campaign in a group with my son, and did my best to stay in character, even when it made progressing in the game harder, which drove my son crazy at times.

I also combat RP much to the frustration of the most annoying member of my current group.

Lann Wren is a great Star Wars name, glad you’ve carried it over to your work.

Pfff, that’s totally me when making a fantasy RP

Slightly neurotic smart guy, a bit out of his depth. Perfect!

I believe in Blast Hardcheese.

Time to bring out your LAN lines.

My first thought was that it was a reference to Llane Wrynn, former king of Stormwind in World of Warcraft…

Being tall can be great, but it also means you can’t by a DOGGONE Toyota corolla, ’cause you can’t blinking FIT in it. Doggone it. :)

Borrowed my sister’s Mercury Topaz once. Found the switch to make the seat go down and give me a little more room, then wondered,”How high does this thing go?” Dug my head back out from between my shoulder-blades and thought most people who need it that high probably aren’t legal to drive-and I’m only 5’7″.

Wow. That stinks. :(
That’s probably why, in my family- most of my f. members by pickups + other trucks…to get lots of headroom! :)

Ed needs to make sure he doesn’t make the same mistake I did earlier tonight during D&D. We’re playing the starter set (Second mission, fourth night of playing), and we’d captured a couple of characters in an enemy stronghold.

One was important, the other… well, we still didn’t trust him. Anyway, we were using both of them as bait to check for traps, and the latter was dangled over a pit to score us a treasure chest at no risk to ourselves.

We were clearing the rest of the dungeon with our prisoners in tow, when we stumbled across four enemies in a room. We’d already taken a couple of bad crits all but disintegrating half our party, and I was out of spell slots, so I decided I’d use a Scroll of Fireball I ‘found’ earlier to weaken the enemies.

I misread the damage it did, and turned the entire room to ash, using Sculpt Spell to keep the party safe from harm. Unfortunately, I couldn’t extend that protection to the prisoners, who were also turned to ash.

But hey, no witnesses.

I just started playing, so my list of mistakes so far is very small. I’m sure I’ll make others, especially now I’ve learned Flame Sphere.