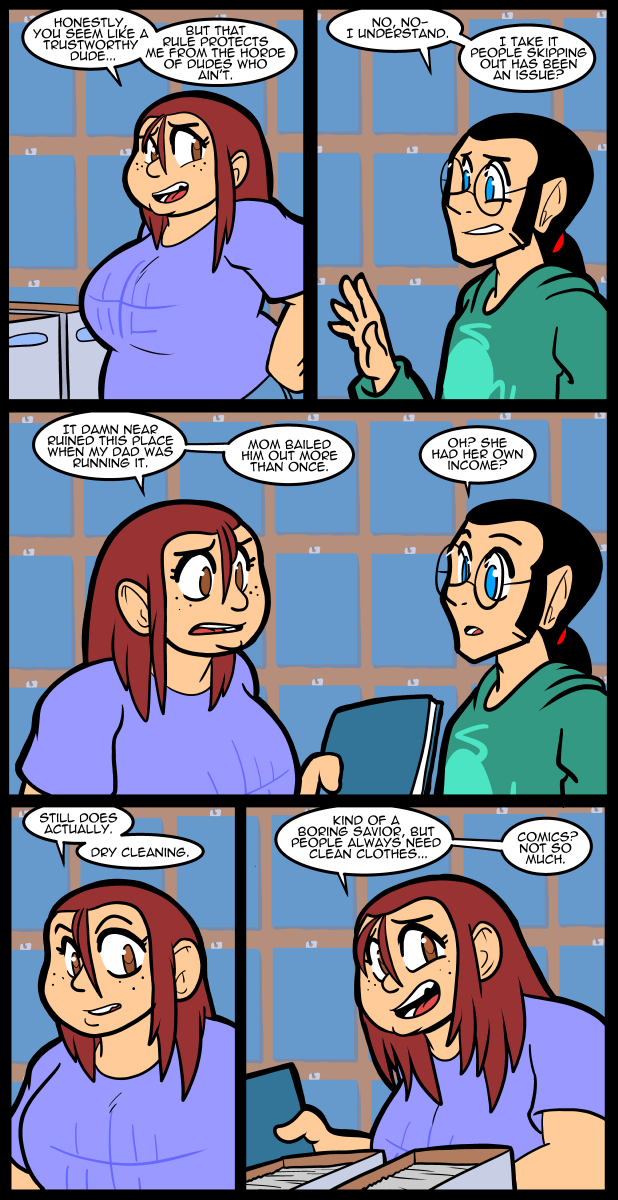 I have an abusive relationship with Overwatch. I’m unhappy alsmot the entire time I play it, but I can’t stop myself from wanting to. After clawing my way to silver I got dropped into low bronze and now I’m just stuck here with the idiots. I also got to a point in Hollow Knight where it stopped being fun, which was really disappointing. It’s a good game, but it suffers from the trend of hard for the sake of bragging rights. Basically the same reason I never got the best ending in Cave Story. There comes a point where a game goes from fun to being a chore.

Also, I just noticed I forgot all the t shirt printing. So I gotta fix that now…

It’s the most boring things that also are the most stable. Funny how that works isn’t it.

As long as people wear business clothes, they will always need dry cleaning.

I don’t know how far you got in Hollow Knight, but you should see what they did with the last DLC… It’s a boss rush where you have to fight harder versions of all the game’s bosses, plus a few new ones. With no checkpoints in between fights. You lose? Too bad, start again from the beginning.

They really went all out on the ‘being hard for being hard’s sake’ thing, to the point that 0% of players completed it on steam so far. Totally ruined the feel of the endgame, in my opinion. I’m glad I actually did (almost) everything else before it was released, made the game feel like a complete experience without making me feel like I missed stuff because I didn’t have it in me to do this last DLC.

I think the number of this page should be 1896.

I mean this as a compliment- Patricia also seems to enjoy using vocabulary…meaning vocabulary that is better than her nation’s, “national average” vocabulary users.
[UGh. No one’s compelling me to write comments, BUT I’m never writing [that] sentence again!] O.o

Knowing how to get Cheetos dust out of a fursuit is a valuable bit of knowledge.

A friend of mine has a similar love/hate relationship with Overwatch, especially after Brigitte was added. This guy spent a solid week playing solely as Lucio when the game first came out just to get The Floor Is Lava achievement.

has her shirt had Loss on it this entire conversation?

Argh, I just noticed that too! What is it about that meme? Nothing for months, and then 20 sightings in the past week.

That sort of thing is what killed my love of Sonic the Hedgehog (specifically, “Sonic Generations”). As a kid, Sonic was HUGE! I had other games as well, and they were pretty cool, but I had my favourites and Sonic was it.

Fast forward 25 years or so. Got Sonic Generations. Played it, tried to collect the tokens, play the mini-games, got to a point where I was getting frustrated trying to unlock all the things that I gave up about halfway through. Haven’t played it in about 3 or 4 years.

I’m not sure which enemies those are. I stopped playing about halfway through the white palace. Or what I thought was halfway at least.

Ugh, you just brought back memories of that last level in Cave Story. What’s so jarring is that it’s so different from the rest of the game.

Yeah I almost beat it but the last section always did me in so I just quit.

I often wonder how you make such a simple premise (your comic in general) so compelling. You are one of the very few good things about Monday. I hope you have a wonderful Labor Day.

Pretty much I just write stuff that I’m interested in and it seems to work out. I like very low stakes soap operas, like the first season of Melrose Place. A show that couldn’t get any viewers until after they went insane from season 2 on. XD I stopped watching it as soon as people started losing their minds and being legitimately mean to each other.

I never really thought about how bizarre this business model is before.

My pull list at my local shop runs about $60 dollars a month, they give a dollar off every item on your list and I have never paid in advance… I went in weekly for the first couple years but now I stop by once a month. Maybe my pull list isn’t extensive enough?

Or it’s that the comic shop owner runs a 24 hour gym out of the other half of the building.

I assume the people who order large amounts of comics in advance and flake out on paying are balanced out by the people who pay in advance for a gym membership and then barely ever use it. Yeah, that’s probably it.

Sounds like you have been trying to play comp mode in Overwatch, which is going to be a salt mine to begin with due to being ladder based pvp, but toss in the Blizzard community on top of that…

That level of sodium is bad for one’s blood pressure.

I find I enjoy it more if I just stick to Arcade mode games like Mystery Heroes where the comforting yet ultimately frustrating illusion of potential coordination and organization has been completely stripped away so that one learns to embrace the chaos. Plus it neuters one of the methods of abdicating blame for playing poorly since no one gets a choice in what character they get.

That reminds me of Tycho Brae talking about Lair, and about how he is now old enough to tell the difference between “challenging” and “hard to play.”