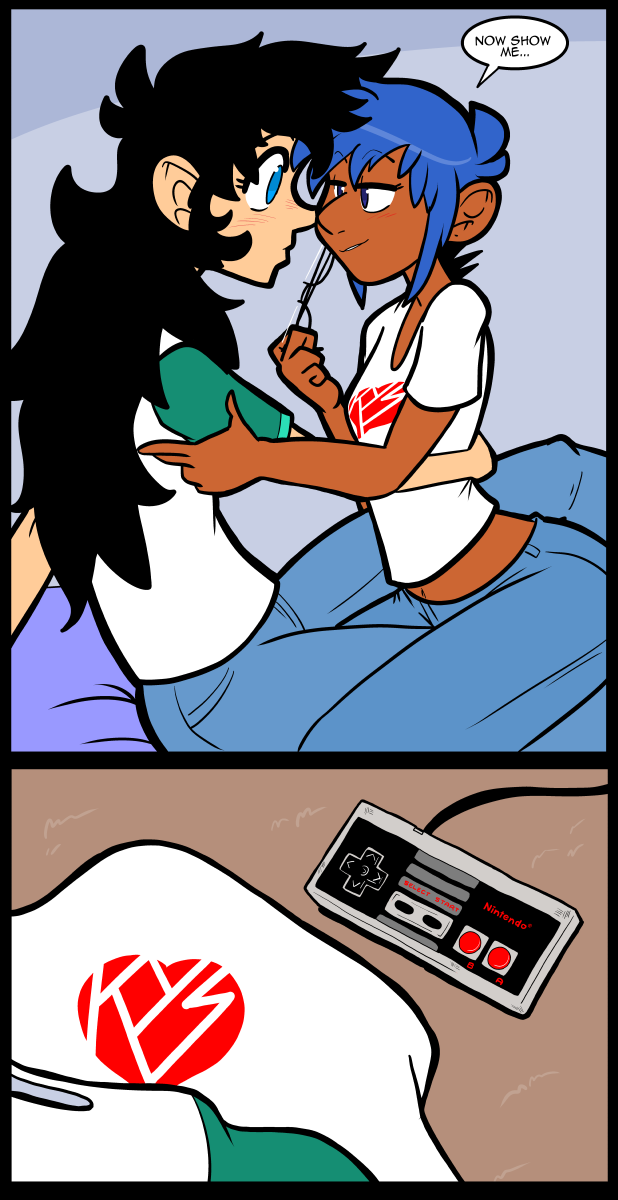 Jo is a complex creature. Still waters run deep as they say. Plus, who doesn’t like a nice makeup fuck? The power dynamic is very interesting in their relationship. It’s also shifted as Jessica has gotten more attached to Jo. I think the most real version of Jess is the one she lets Jo see now. The version where she still feels safe being vulnerable. Also Jo’s true strength shows through when she’s with Jess.

I asked the discord server if the previous page should have been the cutoff for the scene with these two. Mostly to see how my audience would write if they had the chance. I already had enough of an idea of what whould really cap off the interaction, but the page did have that air of closure to it. Except for me it didn’t feel done. Spending the weekend imagining the Slipshine encounter between these two makes for a better Friday anyway. In any case the server basically felt like the previous page was enough, and that’s a fair read, but doesn’t suit my particular idiom. I’m looking forward to seeing if they think I stuck the landing though.

Is Joe bi? I thought she was.

She’s bi leaning toward lesbian. Jess is by straight down the middle.

Hi, Mr. Wohlenhaus! Sweet page here. I wanted to ask if I could be cleared to pledge to you on Patreon again. I think I’m barred because my checking account ran dry before the charge came due. However, I have a semi-regular income now, and I would kill to see the Carol/Nina post you’ve drawn recently.

you need to contact me with your account info so I can tell who you are there.

Other than my name, email, and my Paypal, I’m not sure what is necessary to tell you in order to clear up my account.

A lot of people have weird usernames and patreon makes it very difficult to find specific accounts if you don’t have certain information sometimes. In any case I’ll take a look tonight.

I think you should be fine now.

Thank you very much!

It’s just my idea- I think Jackie means-
Jess is bi…[right] down the middle, or Jess is bi + likes boys + girls…evenly. *shrugs*

The comic vote button is now in a place where I remember to click it. Good job.
~ulrich

And a 2.2 from the Evangelical Southern Baptist Minster with the slipshine account he thinks nobody knows about. =P

Was Jo always a smooth-talking smuggler for hire and we just never noticed? Either way, this shit is awesome!

“Well, more wealth than you can imagine!”

The flirts is strong with this one.

Kinda annoying she got away with using that guy.

Got away with? She’s still doing it… from a certain point of view.

I meant with Brooksie.

Some of us would really love to see the Slipshine version of this encounter. Just sayin’. :)

I always feel like I’m intruding when love scenes go beyond a certain level of detail. Even with characters I’m writing.

The Slipshine version instead pans upwards to reveal a ceiling window, and a naked James looking. Aaaand cut.

Yes this plotline could have ended with the previous comic. It would have left the dynamics of Jo and Jessica’s relationship shifting a small degree toward Jo as the one who is in control. This is a large shift. Jo gets a moment of aggression.

Jo evolving into a place where she is able to use power and be comfortable asserting herself has been a big thing since the start of the comic.

And very necessary if she’s going to successfully direct her movie.

Ahh… Makeup sex when there’s nothing to make up for is the even better type. :->

I like this scene, shows that Jess doesn’t totally control the dynamic between the two. When I saw the controller in the last panel, I pictured the next page, where Jess accidently unpauses the game while getting frisky with Jo, and causes her to lose the high score she was working towards.

This may just be my schadenfreude talking, but i’d like to see how Jess takes that.

Aww, c’mon. Let’s be real here, it is a Nintendo. The odds are that just breathing heavily near it has set the power light to blinking and the game is long-gone anyways.

I mean this in jest, but-
in today’s page, you could finish the scene, by- having the “camera” pan away from Jo’s and Jess’ clothes, to settle on a Star War’s poster.
On the poster, we see Luke, Leia, Han Solo, and C3PO…noticing our cheerful couple.
Luke, Leia, Han Solo, + 3CPO then give Jo and Jess a thumbs-up, and then the Star Wars characters say- Ohhh-YEAAAAAHH!!
:)

I like how Jo suddenly has a huge ass now

It could be the angle or the bright blue jeans accentuating her derrière, but Jo’s hips do appear more pronounced than usual. Not that I would hate big hips, but how she came into them would be interesting to know.

And I like girls with big butts, criticisms not withstanding.
[And if any comment gets me banned from the Elk’s Club, it will we THAT one!] :D

I’m actually fond of huge asses, so the aggressive part is very small

I’ll take what I can get.

Damn. Just… damn! No other words for this; it’s so hot.

Well, Damn. It’s always neat when the shy/timid characters get assertive, not to mention surprising to everyone around them.