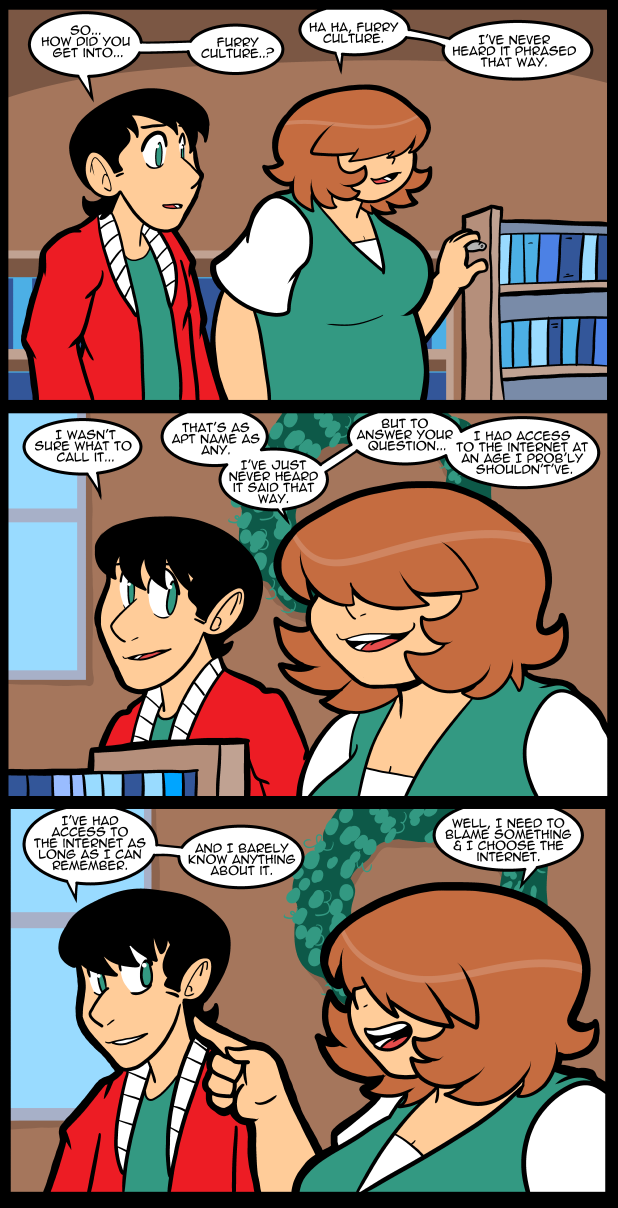 I like the smell of books. I wonder if it’s just because I like the smell, or I like books and I associate that smell with books and that’s why I like them. I think it’s that I just like the smell because I remember liking it before I could read. When I was little my mother took me with her when she researched genealogy and stuff. My sister & I spent a long time in libraries & cemeteries. I think my sister is the only person in the world who read the entire children’s section of the Kinsley, Kansas public library. That particular library was really weird in retrospect. Or maybe it was just unique in my experience with libraries. It had planters that I vaguely remember the soil looking odd in. It was also mostly tiled, which is uncommon. Carpet muffles sound so that’s the norm, but the Kinsley library had those big 50s style white tiles with purposely smudged colors mixed in. Except in the kid’s section. It had this weird ass carpet that felt like it was made of plastic and had a gaudy pattern. Sometimes I think about going back there to see if they ever gutted it or if it’s the same as it was, but then I’m like “meh”. That’s a long drive for virtually no payoff. I don’t remember much good about Kinsley & I expect that hasn’t changed in the decades since I left.

Fun fact: the Kinsley sports teams are called the coyotes, but they pronounce it Kai-yotes instead of Kai-yo-tees.

This isn’t important but I just remembered this weird thing about Kinsley’s school. The gradeschools are in Kinsley, but the middleschools are in Oferle I don’t know if I spelled that correctly, but fuck Oferle anyway. It’s pronounced Oh-fer-lee. Anyway once you get to, like, 6th grade you get bussed nine miles, or something, every day, to Oferle from 5th through, like, whatever grade the line between gradeschool & high school is. I never went to the Kinsley High School. We moved the year before I would have. It was a good thing too because as much as I hated high school I would have hated it in Kinsely a lot more than I did in Garden, which is really saying something because I super hated high school there. Small towns were, at that time at least, terrible for alcoholism & drug abuse because there’s nothing to do. So basically, as someone actually strong enough to withstand peer pressure, I would have spent all those years in isolation while the rest of the people my age dabbled themselves into oblivion, or whatever. At least in Garden there was a small selection of squares to be boring with. Oh, I got off track with my bitter remembrances. What I’m now wondering is why the hell was the school system set up in such a dumb way? Was it to make Oferle relevant enough to remain a city? Was it some kind of graft? Was it laziness? I wonder if anyone knows or cares. I know I don’t care enough to research it, and it’s unlikely I’m going to get an answer from anyone from that area as I have kept in contact with none of them, including people I’m related to.

It’s a shame Alex isn’t real though. She could find out this mystery quick smart on the double & I could know this utterly useless bit of information for a couple of days.

Ah the internet. Container of all of human wisdom and discoveries. What do we use it for? Wasting time and looking at weird things.

The problem with the internet is that it MAY have all of human knowledge, but it’s covered in a thick layer of pseudoscience & other assorted bullshit that you have to sift through because the shit is presented with the exact same level of respect as actual knowledge AND there’s a ton of random other stuff in the mix just throwing everything off.

I’m sure if I were a furry, I could easily blame it on Thundercats and Zoobilee Zoo, maybe even that catgirl lieutenant from the Star Trek cartoon. I didn’t get access to the internet until high school, and that was through the public library, when I was on a big genealogical binge.

M’ress I think is the star trek furry and I know she has some blame to accept for people I know.

I’ve suspected Thundercats for a while. Not my thing, but Cheetara is hot.

Were you trying to make a furry pun? Or did I just turn off safe search?

If I was a furry I’d blame it on Sabrina online. Loved that webcomic. Too bad it ended already.

he does new things randomly though.

That was one of the longest running webcomics in history. And yes, I miss it too.

are you of legal age to browse this website?
*me, 9yo*
yes

Judging from the Kinsley library Facebook page photos, that kid’s area carpet doesn’t look cozy but it didn’t look goofy color-wise, but the tile floor looks more grey than white, so it may have been remodeled “just enough”. Could be poor lighting though.
https://m.facebook.com/pg/KinsleyLibrary/photos/?ref=page_internal&mt_nav=1

None of that looks recognizable to me, apart from the structure itself.

I didn’t even know that “Furry” existed until someone showed up as a Digimon Cosplay one year at my local Anime Convention. I just took it as a creative bit of costuming until the following year there were few more, not just Anime characters, and I heard the term used in a derogatory way. – I learned the hard way to “always” use filters before doing net-searches on new subjects because … rule 34.

Ugh. Yeah, I know what you mean.
Another thing I tell people is: be careful when looking up military subjects, and police subjects.
It can be very nasty to look for stuff, on Google image- and accidentally get lots of disturbing pics of battlefield corpses.

It goes without saying, but that kind of thing can be kind of upsetting, when people do casual surfing, for images.

I knew of furries, but my first real encounter with a Furry was on an Internet forum. Which was about webcomics and video games, but then suddenly there were roleplaying boards and character boards and art boards. And this guy was named Katawa Tenshu. And he was OMGFURRY in the most funny and memorable ways.

I always reffered to it as Furry culture, didn’t know it was wrong. Also Kay-yotes is how we pronounce it in spanish

It’s not wrong, it’s just uncommon. Also, I know. I’m pretty sure that’s why they pronounce it that way. Although I’ve heard it both ways so much that I can’t ever remember which is which. In addition to that instead of Ar-can-saw river they say Ar-kansas.

Also, if I was a furry I could easily blame it on neopets

It’s interesting to think about how the internet is just so big that everyone who spends a lot of time on it has a different experience with it. My first introductions to “furries” was through webcomics and DeviantArt, and for a long time I didn’t even think there was anything special about them or any sort of culture surrounding them.

DeviantArt was where I ran into my first “girl who dressed up as a guy furry experience.”

All her art was about her character Jasper, a male fox. I was nice to them, and then I mentioned I was going to MegaCon that was in the area they were living in. Come to find out later when Jasper found me at MegaCon that “he” was a foxy female.

Re the school systems:

When two or more small towns that have (up til then) had their own separate school districts merge or consolidate,it is not uncommon to set up grades that way. It not only gets the towns to “buy into” the merged school, but (at least for awhile) it is cheaper than building a new school that is large enough to hold all the kids. This has happened a lot in eastern Nebraska over the last two decades.

And Jackie, don’t you remember when in the Garden City school district, sixth graders were bused the 10-15 miles out to the small school at Friend north of GC for several years?

Nope. I only remember stuff that happened to me half the time anymore, dude.

Kay-;yotes is more common the further east you go, at least in the great plains. In east-central Nebraska Kay-o-tees was considered “western” and thus uncouth back in the 60s and 70s . . .

Not nearly as weird as the river that the rest of the world knows as the Ar-Kan-Saw river being known in Kansas as the Ar-Kan-Sas. Really. I didn’t believe the locals in Garden when we moved there in 1982 until I heard it on the network news out of Wichita: Ar-Kan-Sas!

Just another example of regionalism . . .

There was a time when I didn’t know about ‘yiffing’. I blame furry culture.

blame should be placed on the 1973 disney Robin Hood film, Maid Marian was quite the foxy lady.

Enid Blighton, many other authors, and of course Disney and Warner Brothers made animal people normal, Warner Brothers also made one of the most fun characters in existance out of a gender-ambiguous tease, and Star Trek conditioned me in acceptance and cross-species… uh… *relationships,* (and other things I won’t go into). *So,* when I found the other members of a webcomic fan community were all furries and fans of the author’s other, furry, comics rather than the one I knew about, it was no big deal at all. Between cartoons and Star Trek, I fit right in.