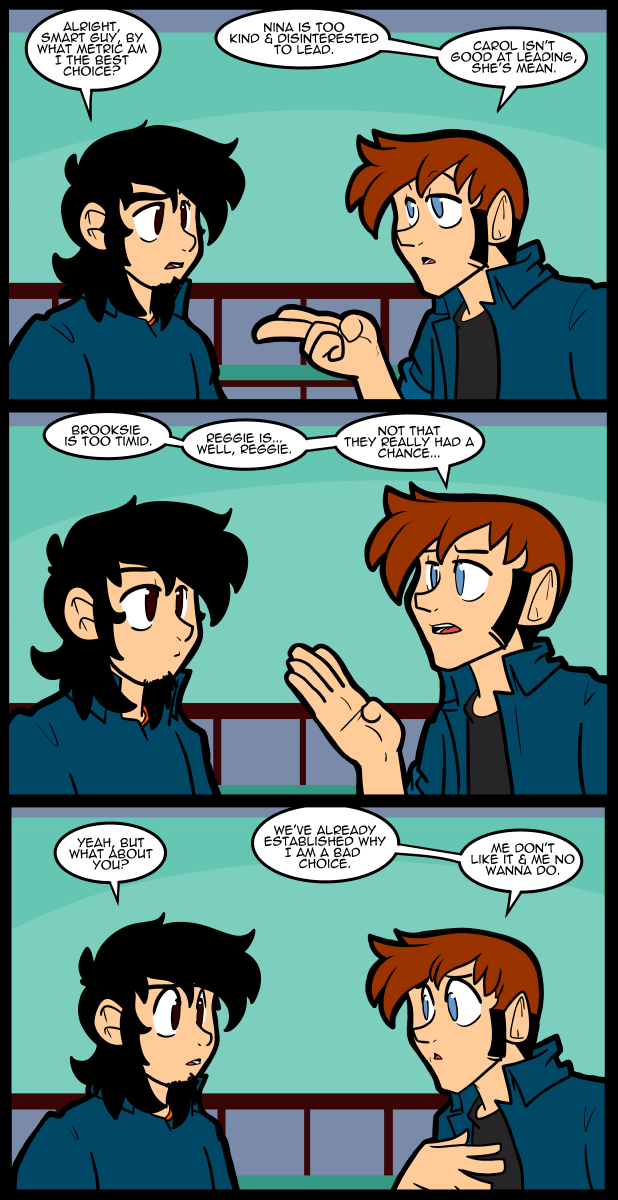 John is bound & determined to be annoyed about Thomas being asked first.

The other day someone randomly pledged to my Patreon, but didn’t shop up in my notifications. I just got an email about it. Apparently they mistook me for someone else, which is a whole other series of unanswered questions… Anyway, they have a patreon too and they sell 3d models that you can print on your 3d printer. That got me thinking. Many years ago you it was a trend for webcomics to sell little statues of popular characters. I only know of a couple off the top of my head, but Shortpacked did some & Wapsi Square did at least one. It’s been almost a decade since then & techn ology may have caught up to the point that I could do something like that via 3d printing. Honestly I doubt there’s a market for it with my characters, but in my dreamer’s brain it seems possible. I have a vague memory of pricing a 3D model a few years ago for something else and it was like $200 to get it done. Honestly that’s not that high a bar if the end user is the one who is going to actually make the figure and paint it, or whatever. In theory I could even get a 3D printer & make them myself to distribute. They aren’t so expensive that I couldn’t save up for one, plus that’s a business expense so I could write it off on my taxes. I’ve never bothered much with merchandise because it always fails hard. For every one person who says they want to buy a t-shirt the actual numbers work out to more like -100 because I invest time, which equates to money for me, and never sell anything. Or maybe one or two things in a 5 year period. Patreon has worked much better because it’s basically people saying “Listen dude, just make the comic, okay? I don’t need your crap cluttering up my space.” Still, there’s something inside of me that wants to have a little statue of each of my characters. A physical representation of these figments I poured my life into at the expense of everything else I ever wanted. Chances are I won’t do anything, but it’s nice to think about.

Also, the other day they started offering the Homestuck books on the Viz manga store… I don’t even know how to process that. I love Homestuck, but it doesn’t belong there. I mean if Homestuck can be sold in a digital store for the same price as, like, Dragon Ball then why not my stuff? Maybe the doors will open to any schmuck if you knock long enough.

I’d buy a Carol and a Nina. Possibly a Thomas.

I’m not normally action figures guy, somebetween failures figs would be awesome. Especially if you had Reggie and Nina.

Makes sense to have a physical 3D model of a 2D character, to help keep the drawing on model. I know big animation studios have them made.

Id prolly get a figurine or 3 if they were available.

Don’t currently have a 3-D printer, but I’d chip in a few bucks for Nina and Victoria Files on the off chance I ever get one.

Check your local library – a surprising number of them seem to be incorporating maker-spaces in an attempt to stay current. College campuses are also a good place to look. It’s generally not that expensive for a small single-color print.

Maybe you could try to draw them in 3D on a software first. I know you can do that with Paint 3D if you don”t have anything else, but it would probably be easier with another software. Then print one for yourself to see the end result. If it’s good, you can release the file to Patreons to print themselves or ask how many are interested.

if you ever offer them id love to buy some figures of your characters!

You could make pin-up type models.

I have a statue of Robin from Shortpacked. Fo’ rizzle.

Dude if you made this comic into books I’d buy them in a heartbeat.

What about Wes, does anyone remember Wes?

i do but people don’t seem to care about him, including me

i would definitely buy some 3-D figures of some of the characters in this, if you do decide to buy some i’m sure you could turn a profit

It’s possible through places like Shapeways to print the model in color; if you bought the printer, probably not.

I think that’s my new motto as a manager at the meetings where other teams try to scrape off work on my team:

Make that a poster, I’ll buy one for my office.

Me hungry! Me want eat!

I did Patreon precisely because you don’t do books. I wanted to support you somehow.

“You’re the best choice, not by selection, but by process of elimination.”

Hiveworks is running a KS for Menage a 3, and apparently they put out a figurine for each KS of that comic. http://www.menagea3.net/
If you ever wanted to do these in bulk (big IF, I know, the 3D is likely a better option for smaller volumes), you can check with them on pricings and details.

Printing a Brooksie would be super cute! I’d rather have figures to print/paint myself if that is an option. If not at least to paint in cute colors.

…..I’d like to have a Carol, and a 3d print would probably be as close as I’d ever get-but it might be a little weird…….