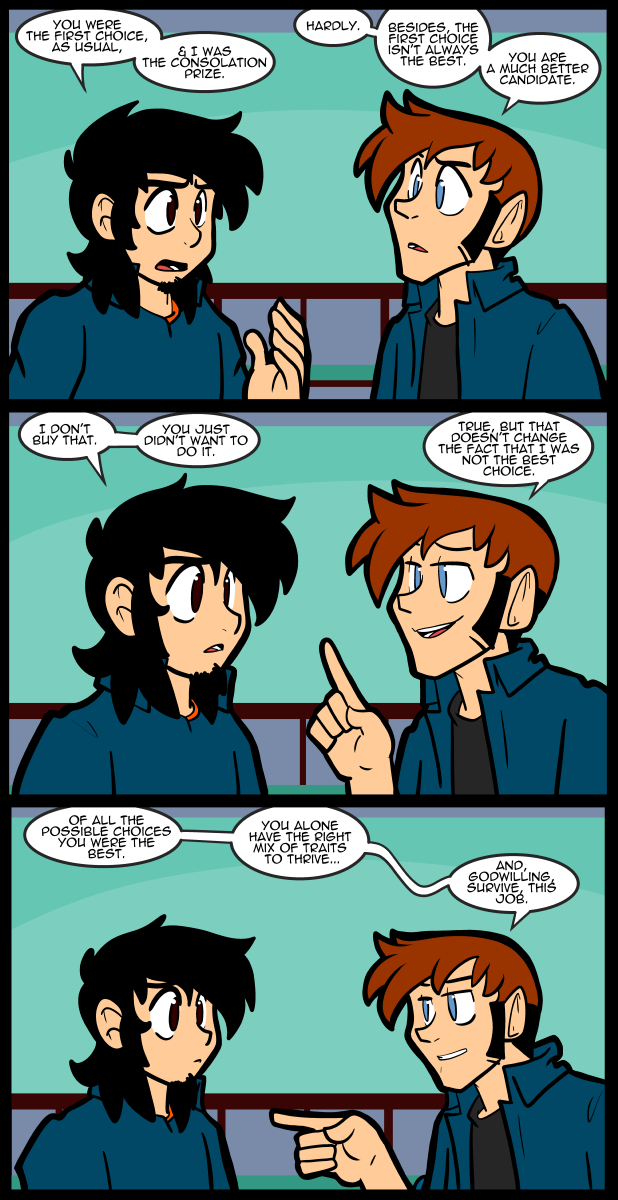 The idea that being the second choice for a promotion is somehow bad is kind of off in my opinion. You kind of have to be political about that sort of thing and take seniority in to account, which Mike did. The alternative is possible bad feelings and losing a longtime associate. Of course it can go badly the other way too. Sometimes you just have to do what you think is right and hope everyone puts on their big kid pants about the whole thing. In my experience that’s pretty rare, but hope springs eternal…

Yeah sometimes all that matters is not getting fired. Stick around long enough you may actually become compatent. Speak from experience on this one.

My brother got a job at the company where I was working and absolutely crushed it (cementing the family legacy) and within 6 months was being considered for the recently vacated supervisor position. One of our more senior coworkers got so angry he ran into the GM’s office and said that I my brother got promoted over him he’d quit then and there. The GM just went “Pfft okay” and gave him the two week papers xD he didn’t quit

It’s just my pet peeve- I once worked in a retail store…doing: stocking + helping customers, + anything else that was handed to me.
…I really thought it was too fancy, to call us entry-level-workers, the “associates”.
I’m an “associate”? What is that? It sounds like I’m soooo important, like I sell Bentleys, or Rolls Royces, or private jets, or something.
I was an [E.L. worker], in a retail store. Good grief. O.o
An “associate”, made me sound like I was verrrry important to most of the management people.
Probably not. If I got [written up, 3 times,] for calling a management-guy a piece of c_, or something like that, I’d be fired in a flash. Hm.

But my impression is that almost every business in America has started calling entry-level customer service people “associate”.

Or “agents/operators.” I know a lot of people who are entry-level in tech companies called agents or operators. The deal is not to label something generic, since you need to know if they answer phones (agents) or fix issues (operators).

In a role-based corporate system, where people are granted access based on their roles (agent vs operator vs developer vs manager vs etc), you need to be specific. It doesn’t mean you aren’t talented enough to do other things, or that your job doesn’t overlap an area, but it means if I’m a manager, I have access to time cards, reviews and specific systems/information required to do my job. If I were an agent, I would only have access to the phones and a system required for that function.

The reason for this is that with recent security breaches, IT companies are creating more barriers between them and the black hats. Say an agent accidentally gives away his ID and password, someone getting in would only get to access to an isolated system that is encrypted, so data can’t be easily exported. It can be viewed if you have the decryption, but that’s only available locally. If you try to remotely access it, the gate slams closed, a trace is immediately run, the account is disabled.

Developers need more access, and only access to code, not client data. Agents may have limited access to client data, but none to code. General managers only have access to do management. I’m a Service Manager, so I have access to two roles, and I have to limit what I do when I’m signed in as one role vs the other.

What’s that, Thomas? I can’t hear you over the sound of my bullshit detector going off.

It’s a bit unfortunate that John, for all his own charm, is often forced to play second fiddle. I can imagine after a while it could lead to feeling less capable than he is.

Better than thinking yourself more capable than you are, I suppose.

I was (and still am) at my work for just gone 10 years. When the role of warehouse manager came along… I straight up refused it. I know what needs to be done, but I am not good at directing others. I hate responsibility. I was then consulted as to who would be the better choice, and although the boss at the time ended up rescinding that decision (the guy I picked apparently was “not strict enough”), I still stand by it.

Sometimes there is the ‘Looks the Part’ factor in job placement. Medium size guy, who knows Akido And Karate, but the big broad shouldered guy (knowing neither) gets the job as Barroom Bouncer,.. because ‘Big’.
And big is not always stereotyped as threatening, stereotyped as eminently cuddlable, and fun loving, gah! Stereotypes! Just gah!
And don’t get me started on short people, stereotypes, just gahhhh!

Well, part of the job is making a drunk feisty* guy hold up and think, which is easier if you’re more, eh, straightforwardly constructed instead of the sneaky assassin type.

Those who are aware of The Peter Principle (“In any organization, people tend to be promoted to their level of incompetence”) generally have a better grasp on their career.

Though from the outside it can look like a lack of ambition.

My Dad fought The Peter Principle for thirty years. He eventually relented so the company could hire the guy who would eventually take his job when he retired. He started there in the early 1950s with a Baccalaureate of Science in Chemical Engineering, and eventually earned an MBA. His replacement started with a PhD in CE. Dad ended up as the #2 man in the plant; he could have been Plant Manager, but he understood what Dr. Laurence J. Peter was talking about.

It’s not always that, though.

Here’s what I’ve noticed. I was an officer in the Air Force, and when I got out, I wanted to be a normal, not-in-charge employee somewhere. I got my job at a big IT company, and worked alongside a guy who had 10 years experience on me, and knew PROGRAMMING better than I did. I one-upped him in knowing how to maneuver around the political roadblocks, stay cool under pressure and VB Scripting.

About four years later, our boss was let go. So there was a vacancy. I didn’t know if I really wanted to do that job, but my Director asked me nicely to put in for it. The guy with 14 years knowledge and experience on me also applied. We went through the process and … I got the offer. Although I was still not the ideal candidate (in my head) for the job. I declined it, and they picked another lady from outside the company to take the job. Mr. Experienced never did get the management job he wanted.

I moved two more times since then, and every time there’s a management or team lead position open, and I go for it, I get it. This is what I learned (about myself and about how they pick people for these jobs):

If people generally gravitate to you doing what you ask, and you end up being the person who is directing others at work, that gets noticed. For example, in my previous jobs, eventually I realized everyone was coming to me for help or direction, so I just took charge. I didn’t want to be in charge, but I thought for the good of my team, someone needs to act as the conductor. Whether it was implementing a lunch schedule or an oncall tool or just sending an email out to our boss saying, “Hey so and so is doing this tonight, and so and so is doing that.”

Also I was highly organized and very communicative. My Directors walk by my desk and comment on how organized everything is on my desk and screen. They also comment on my shared calendars and emails detailing what is going on without getting into the weeds. I talk to everyone I need to, and sometimes I go beyond that to resolve my own issues. I am not silo’ed into my cubicle, focused beyond noticing what is going on around me. I am always aware of people coming and going, and I take a moment to say hello (but not be over chatty).

Finally, it really comes down to WHO you know and timing. How well do you get noticed for doing stuff the next level up likes? I’m visible, and that tends to make me a candidate for moving up. I have seen jerks and people who do just enough right things to get noticed get management jobs that they really shouldn’t be doing. Unfortunately, that happens just as much as hiring a good manager. And people you’d like to manage don’t always want to do it, so they pick the next “best” thing. And if your boss’s boss is an idiot, he’s going to promote similar idiots to bolster his line of thinking.

That’s just my two cents. I’m a manager, and I don’t think my employees hate me (they are pretty vocal about issues when I have my one on ones and open door sessions). I do see terrible managers, and I know why they are hated by their direct reports and peers (I can list somewhat accurately what makes a good manager and what makes a bad one from experience).

You have to take your wins where you get them. Otherwise, you never get recognized for your achievements. Promotions rarely happen because of your performance, but more because of luck or who you know.

I removed my name from the list of candidates for promotion to Sergeant when I was working as a guard at a nuke plant. I was next on the list and far better than those already promoted, but I had only recently put in for the position.

The moron who was next on the list proved her ineptness to the point that she embarrassed Management and was relegated to the ‘training staff’ — positions the security company kept for the supervisors they wanted to keep out of the client’s sight and hearing.

Many years ago I worked on a crew comprised of a working foreman and 3 crew. Our foreman unexpectedly died and the employer offered us 3 crew first shot at being working foreman. We talked it over and I was the senior employee and I took the foreman job. However the reason that I took it was not that I was senior, it was that I drew the short straw. I lost.
~ulrich

It’s good advice. You usually have to tread carefully when you promote someone.

(Not if it’s a BS promotion though. “Telepath, you are now senior partner in charge of basement closets.”)