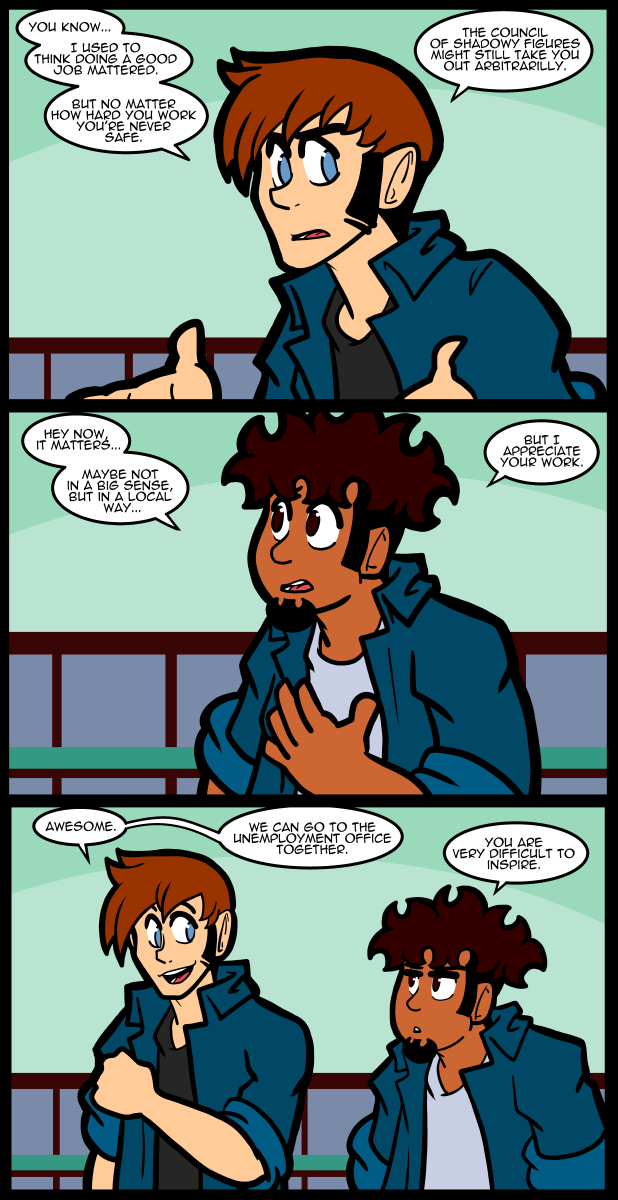 Pessimistic people are hard to lead because they always foresee all the things that can go wrong. Not that Thomas is a total pessimist or whatever, but he does tend to expect the worst so he can be ready for it. Unfortunately voicing those thoughts can bring down the moral of a group and contribute to the expected negative outcome.

I went to a cousin’s wedding yesterday. I’m always an extra character in these sort of events. People don’t understand what I do when I explain it, so I’ve just given up. It’s not that people don’t know what a cartoonist is, but they’re baffled by what you have to do to make money doing it. It get tedious fast. There used to be a sort of shorthand I could use to explain things to people, but the young ones don’t have the frame of reference for newspaper comics. So if I say my comic is like Mary Worth, but with swears, it just sails right by. Generally people out here don’t spend a lot of time online. The ones that do don’t come to weddings.

In any event I’m tired from the whole affair and feel like shit today from being around different allergens, or whatever it is that makes me feel randomly crappy. It’s possible I just had a little stomach bug that made me feel ill and the wedding really didn’t have anything to do with today other than making me a little tired.

The cousing who got married will be… 27 or so in a week or so. It’s a weird feeling to see these kids all grown up.

Seems less pessimistic and more realistic to me.

Work for a non union and if you’re not buddy buddy with them, guess who’s the first to go? Hint, it’s not the buddy.

Work for a union and hard work means nothing. Job goes to senior person, even if they’re just good enough to get job.

It absolutely matters how hard you work, it’s just that you might be working hard at the wrong thing. Like giving 110% to a place where they don’t give a shit, instead of working just enough not to get fired and put that surplus effort into something that might actually be useful, for instance.

Employees are the rungs on the ladder to success don’t hesitate to step on them. The more I read this comic,the more I find myself quoting those rules of acquisition.

Unfortunately, these rungs are sentient and able to see you coming. If they know they’re just going to be used, they have a tendency to give out under your weight (ref. Yertle the Turtle.)

Understandable. He is by far the best-known ferengi.

Pessimism is one of my most important tools as a programmer. It lets me know that a whole approach to a problem won’t work in time for me to find another.

There is always the manager types that spew, “Failure is not an option”…. to which I reply, “it is mandatory” ….. and if the blowhards/MBAs allow my to continue …. “The option is whether or not to let failure be the last thing you do”. …. if they don’t let me continue then I let them spew on and then hit them with “So you subscribe to the Simpson school of Success?”, “If at first you don’t succeed, give up.”
Yeah Business majors either hate me or despise me, though it is mostly hate.

Perhaps it is because the pap that they swallowed in School, doesn’t reflect how business Really works? A lot of being successful is being in the right place at the right time. The other part that they hate is that sometimes it is not the right time for that good idea. … No matter HOW good the idea. Gosh they hate that.
Isn’t Life is more like a bowl of Jello than like Algebra or Geometry, it wiggles, it wobbles, and you can hold the bowl really tightly, but that is just the bowl. You cannot hold the Jello tightly. And if you try, you won’t have much in your grasp, at all.

When an MBA-trained manager says, “Failure is not an option,” they’re misapplying the phrase. When Gene Kranz said the words, “Failure is not an option,” in the face of the explosion aboard Apollo 13, he wasn’t ridiculously using do-or-die language in support of a project that might have turned out not to be worth the effort even to finish it. Instead he was a leader calling for the ultimate, maximum possible effort to save the lives of the three astronauts aboard. We don’t think about it now, but even the save-the-Apollo-13-astronauts “project” could have failed, but the difference is that the all-out effort to save them would have been worth it even if they had. Your typical business project doesn’t come anywhere close to that standard.

The reason I am a pessimist and not an optimist is this:

An optimist is often disappointed when, as usual, things turn out poorly.

A pessimist is pleasantly surprised when, on occasion, things turn out well.

People always say that but they forget the other part of optomism/pessimism:

When things turn out well, a pessimist will find something to still complain about.

When things turn out poorly, an optomist will find the silver lining and be happy for at least that much.

Does he sees a future failure in his relationship too?

If you think it’s weird to be in a wedding with the cousins you grew up with, try being the only unmarried one and the only one that hasn’t spewed forth any spawn from their crotch.

You can imagine what I’m going to get asked at my graduation.

I meet those criteria as well…

Great fun getting asked “when are you getting married?” like being single is some sort of failing somehow.

Maybe I just haven’t found someone I actually LIKE enough to spend the rest of my time with? Maybe I prefer being single and alone and neither of those things scare me? But no I’m expected to get married and expected to spawn mini-mes from my crotch before my “biological clock runs out”.

My answer has now just gotten to “well find me someone I can tolerate for more than a few minutes without wanting to torture in ways that would make the UN have PTSD.”