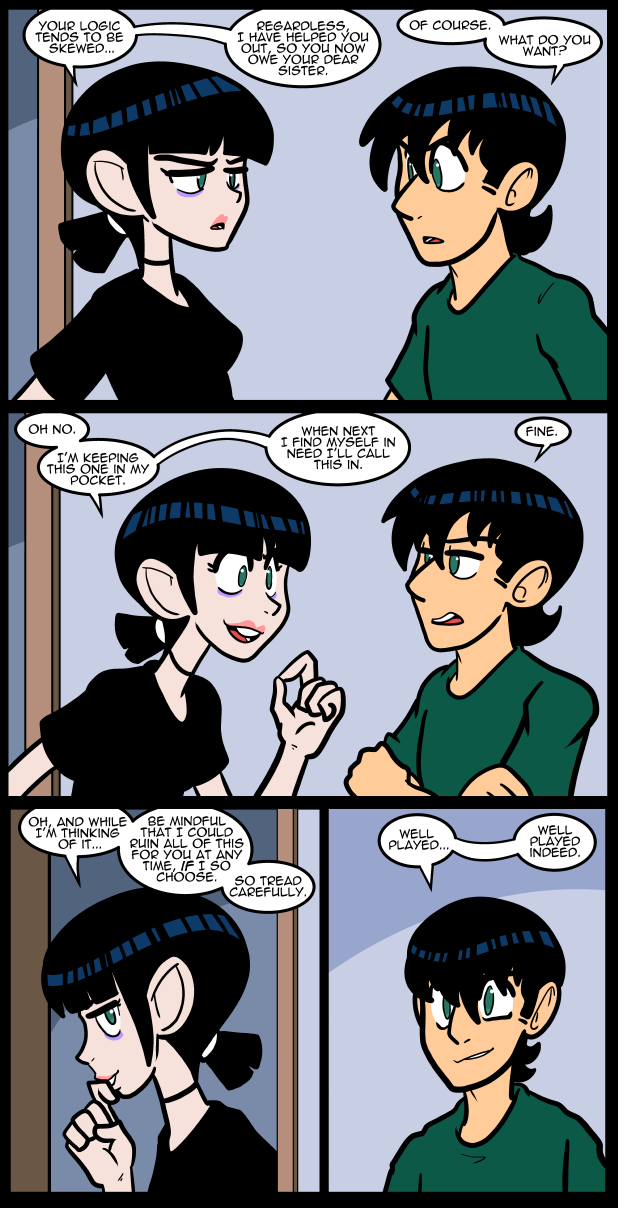 Okay, firstly I want to announce the Between Failures Wiki, which has basically been the work of one fan to document this whole world I’ve conjured. It’s a much better resource than the cast page by far. He’s still working on it, but there’s enough to enjoy and today is a good day to announce it. Errant is the username of the creator on the Discord server, if you happen to go there. Give him a thanks if you enjoy all his effort.

Also, as since I bring up the Discord server, I want to apologize to SolarDWagon for the negative interaction he had with me the other day. If he happens to stumble into the blog. He managed to find one of my rage triggers that made me act uncharacteristically severely. It doesn’t happen often, but when it does it’s always a bad time. I should have taken a step back, but in my fury I used my powers unfairly. So, if you happen across this note, my bad. I’m human too & you stumbled into a situation where I was already primed to be angry and got the brunt of it which you didn’t deserve.

That said. if you go into the politics channel and start threatening to block people because you don’t like what you’re hearing you can expect me to get furious real quick. I let people say all kinds of outrageous shit in there all the time. It’s all in there to see.
But if your response to the discussion is to plug your ears and scream “blah blah blah not listening!” I get instantly furious.

It’s a rough room, but we still manage to remain very civil, especially in terms of the usual discourse of the internet.

I think Reggie is starting to respect Victoria, at least more than he did.

I don’t think I’m going to get into Discord in the near future. It’s one more element of the Interwebz I don’t need to get tied up with (I spend an unhealthy portion of my time here, anyway), and from what I’ve been reading, Discord is aptly named.

[rantmode]
I was responding to another cartoonist’s Journal on Fur Affinity the other day, and mentioned how screwed up the politics in my state were. Some flaming @$$#013 I hadn’t even heard from before came flying at me, basically spewing a lot of media-skewed blather and putting words in my mouth. I showed him where he was wrong and told him I didn’t appreciate his attack, but it just fed the troll, as they say. He left another screaming tirade (I do believe the word Nazi was used), undeserved and undesired, so I quietly blocked him.

I’ve given up threatening to do that; it just seems to delight the monsters. It might make more sense to report him to FA’s moderators, but a lot of people have been getting banned for nothing, lately, so 1.) I don’t want to be That Guy, and 2.) that’s sort of the domain of the Social Justice Warriors.
[/rantmode]

If it’s any consolation:

I used to get on the [highly?] conservative site: that has a name like: neoneocon…etc..
Why did I get on that site? because I sometimes like to read about govt. stuff, + argue w/ excited strangers about- current events, + suchlike.

Onetime, I put up a [what I thought was], a mild + innocuous comment, along the lines of:
[ Maybe the rulers of, the nations around Afghanistan, know more about the Middle East, than the current President, George W. Bush, does].

Man, did that explode on me in big ways, in a New York minute.
The comments that came back as replies were some of the most vile, horrible, and hideous things, things that I would [never] say to someone that I do not know…not even as a joke.

The most impressively-horrid, reply that I got was along these lines: she said, quote- “You’re a FOOL! You’re one of the people who is burning down the COUNTRY, with your lose morals, and your naive actions! If you lived in Germany, during the 1940s, you would be one of the foolish, unaware people who would get rounded up, and [killed] by the NAZIS!!!!!”
-unquote.

After that, I thought: WHAT the f__??
I looked at the site to see if I could report abusive behavior, but their wasn’t any such device on the site. I [don’t] even think that there was a way, back then, to even email or contact the site’s owners, to ask them to stop such abusive behavior, in the future.
So, I reread my post, Her post, + said: I think you misunderstood what I said. I was not mocking the president, or our nation, but exploring the idea that other nations might have good + practical ideas, that we do not have. [ No reply ever came back from her].
I don’t go to that site anymore.
If you please, people can think what they like about me, + my actions in those days. That’s cool. Beat me , whip me, make me write bad checks…and all of that stuff.
Just an aside- I don’t agree with a lot of what the nnc’s site owners believe in. I make my own views.

TL;DR. But yeah, I can commiserate: even in an online forum, or on a site for artists, I’d say- there are some drama llamas who act like thoughtless jerks, + are probably drama llamas who are best left not getting responses, from you and I, and most people. Thus endeth the soapbox speech.

Thanks for the info about the site.

Hm. Yeah. When looking at such topics, I like the approach of the comedian, Jerry Lewis.

His approach was something like: Since I’m famous, some guys are always asking me to get involved in government issues. That’s not a job that I have any skills in! I’m a comedian, I’m skilled in that.

So when people ask me to get involved in government issues, or political issues, I say to them: “Thanks very much, I’m already doing comedy.” :)

Treat people in your debt like family exploit them. Rules of acquisition 111

Wow, nice to see Victoria showing some of the energy and spunk she has in her fursona in her regular persona. Love her!

Awesome ! A BF wiki. I will contribute to that.

Victoria’s face in panel two is the weirdest expression I have seen in this comic since her introduction.

And I found it oddly arousing.

I believe something is wrong with me.

I’d call it “nefariously excited”. Equal parts joy (easy favor earned, plus some satisfaction from getting to call out Reggie on his shallowness (but honest shallowness, so points to him for self awareness…even if it is cringeworthy at times) and him totally going with it) and the potential to make things miserable for him, should she choose to do so (kind of a lead in to her panel 3 expression). It’s basically “crazy eyes”, and that’s okay.

Reggie’s last expression kinda sells it all, what with the combined show of respect & satisfaction at getting the info he wanted, but also the realization that Victoria holds many more cards than he’d wish, and they could all cost him dearly in this endeavor (but he also respects that, as it is their way)

Victoria in frame 1 is also a bit unusual of style for BF.

Veronica really needs to get out and get some sun. Hope she’s taking vitamin D supplements

She’s taking the vitamin F
As in furries

Reggie either likes high risk/high reward situations, or he is honestly not familiar with the concept of cost/benefit analysis.

Now, I don’t figure him for an adrenaline junkie, so “gambling big” seems an unlikely answer. So I’m going to guess that Reggie is naive about people, and really doesn’t realize how big of a risk he’s taking.

Part of me hopes Victoria does the noble thing, and part of me wants her to make him suffer. Either way, I’m conflicted.

Honestly, I never saw the point in ‘threatening’ to block anyone. Either you’re fed up and have decided that the individual will never have any meaningful contributions to any conversation and have already blocked him without bothering to say so, or he’s simply an annoyance and you go on your merry way mostly ignoring him in the hopes that he might one day have something useful to say. Or, yanno, have a meaningful conversation, that’s generally the goal of socializing.

Using ‘he’ as gender neutral, since English doesn’t have a good gender neutral singular pronoun (it generally refers to a non-living object, they/them is plural). You’d figure with all the languages it followed down alleys, clobbered upside the head, and went through pockets for loose grammar, that it would’ve at least picked up a gender neutral (or gender inclusive) pronoun.

BTW, when I learned in 3rd grade that “they/them” — though generally used in the plural — can also be used in the singular, I’d found my “gender neutral” pronoun. Granted, this was back in the 60’s when nobody cared, but as a burgeoning writer, it was a lesson I took to heart.

Well,the lack of gender-neutrality is fairly common in the other languages, so, even if English does take a lot of its words from all around the globe, it’s not that surprising that it didn’t learn one elsewhere. Yet.

And at least, not EVERY word has a gender, unlike in my mother tongue, French.

But where is the drama if you don’t announce it?

Starting to get a little GoT up in here…

Those two should really be wearing capes and have pointy teeth.

Actually I believe that both Reggie and Victoria have a lot of respect for each other. Their antics with each other is sibling rivalry but, on a more “mental” plane rather than the normal physical or emotional one. Basically head games are the order of business in this household XD.