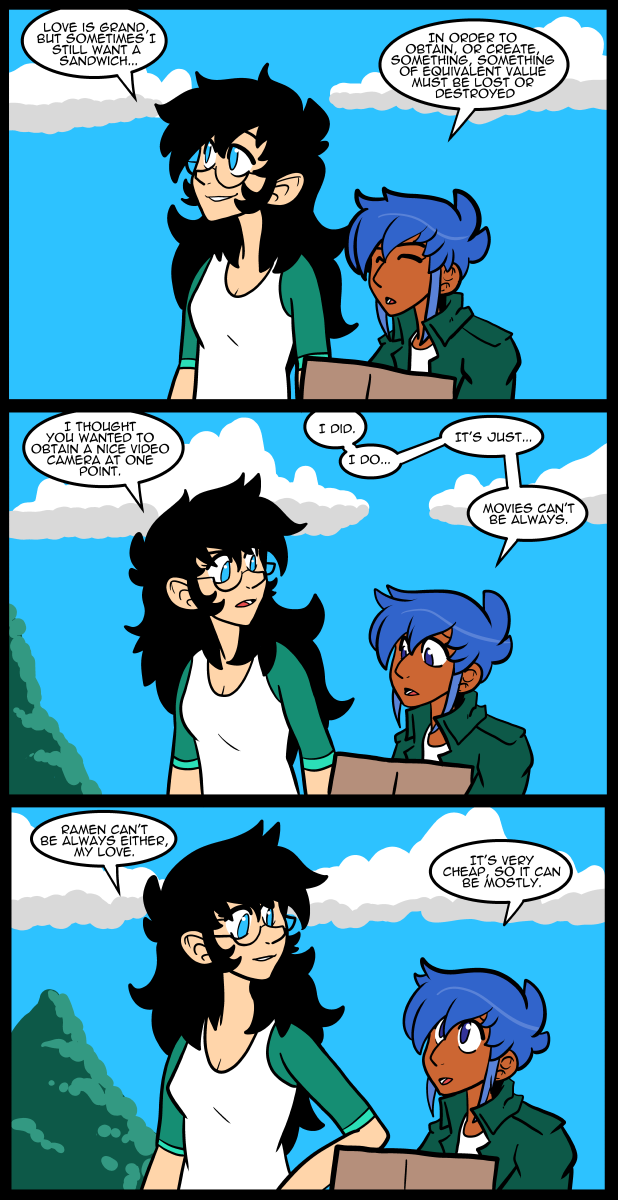 I replaced all stuff on my cpap machine yesterday. I slept at a weird time, but woke up feeling abnormally functional. It is possible that part of what has been wrong with me was some kind of hole in the hose, or mask, or something, that was making the seal malfunction, which was allowing me to choke in my sleep. It actually makes sense because the symptoms of prolonged apnea include extreme anxiety. Combining apnea with the other stressors could explain a lot of my extreme symptoms. If I start feeling better regularly from this point on that will be a pretty clear indicator of what’s been up.

Awesome ! I would say

Sleep is one addiction that does a body good.

I hope that Jo’s body doesn’t get replaced by a huge suit of armor, Like Alphonse’s body. That would be kinda sad. :)

Maybe she’s eating for herself and a lost sister. That would explain why she’s so… short. XD

It would make Jess’ point doubly valid, too.

I’ve been watching Brotherhood on Netflix.

*Crossed fingers that you’re feeling better.* My (kind of) mother-in-law and brother-in-law both have seep apnea and are on cpaps – my partner *probably* has it as well but is too stubborn to go in for a seep study and thus is often exhausted and sick much of the time. Again, please don’t discount environmental factors (like pollen/dust/mould) in terms of your health! I can’t help but wish you had more reliable health-care professionals…

Following up on yesterday’s recipe suggestions: while pasta, sauce, and cheese is very carb-heavy, it actually *can* be nutritious. Get a decent pasta (I know wheat pasta is healthier, but I personally can’t stand the taste of that stuff) and a jar of tomato sauce that has a decent vitamin content. (IIRC, a serving of some of the Ragu sauces apparently equals an entire serving of fruit and veggies.) A hard cheese like grated parmesan or romano isn’t that high in fat and provides calcium. One box of pasta + one jar of sauce + a container of grated parmesan = about $15, at least where I live (NYC).

Another nutritious meal is beans and rice. Get some rice (these days you can get boil-in-a-bag rice) and a can or two of the Goya beans. (Again, brown rice is often healthier but is more expensive.) Cook the rice. While simmering the beans for a couple of minutes, throw in whatever you’ve got – olive oil, lemon juice, chopped garlic, dried parsley, chopped tomatoes (including canned tomatoes), and/or any other veggies you like. Dump the beans and stuff on top of the rice.

Can you tell I was a poor college student for a long time? :P

I also learned to rely on frozen veggies. Even now, when I’m a (slightly less poor) college professor, I still can’t always afford fresh fruits and vegetables. Worse, they sometimes go bad before I have a chance to make them. From what I’ve read, frozen vegetables have essentially the same as fresh vegetables in terms of nutrition. I’ve got a quick version of succotash that I really love. Drain some canned kidney beans and dump them in a pot. Dump some frozen corn on top. Stir and dump in a couple teaspoonfuls of water. Cover and cook until everything is hot but not burnt. Drain and eat with some butter and salt. Corn is NOT as nutritious as some other vegetables, but it’s not actively bad for you (except for the sugar content) and kidney beans provide a lot of protein.

I am an ENORMOUS fan of edamame and, from what I understand, the frozen stuff is not that hard to find at many supermarkets. It takes about 5 minutes in the microwave. I personally am working very hard at replacing some of my unhealthy snacks with more healthy things like edamame.

To be completely clear: I am NOT trying to judge you or make any kind of unfortunate comments about eating habits/weight/health, which is not my place and which is not at all okay. I’m just trying to share some cheap healthy recipes that worked for me. As many others have said, we readers just hope you are healthy! :)

I always cook down my sauces so that they would stick to the pasta.
I never could stand the canned sauces only because they were mostly water and not that far from being soup.
The ones in mason jars are a darn sight better and go at least twice as far with the bonus of having some flavor. They are expensive enough to wait for a really good sale and then stock up on. I have two dozen in the pantry from the last sale. Just rememebr to read the ingredients and get what you like.

If I have the time, I do like to cook, my go to for a healthier and really tasty sauce though is the strained Italian tomatoes in bottles and whatever veggies I have kicking around be they fresh frozen or canned [like black olives]. I sometimes have to add a pinch of baking soda to neutralize the acidity and bread or cornflake crumbs as a thickener because I added too many wet ingredients. I like to get it to a decent thickness and play with the flavor. Cooking should be fun after all.

Some frozen vegetables don’t need to be cooked. Some are even delicious frozen. Long ago I used to sneak frozen peas out of my mother’s freezer, chip them out of the ice, and eat them cold. Delicious.

Some frozen foods are actually fresher than the nonfrozen variety. Frozen fish can be frozen on the fishing boat (well, at this scale it’s probably a fishing ship) and doesn’t have time to go back.

And frozen orange juice concentrate is the way to go.

They make a big point of selling you orange juice that’s “not from concentrate”, but to make it keep well (because it has to last from harvest time to drinking time) it is a complicated chemical concoction. They take the oxygen out to keep it from spoiling, then when it’s time to go to market the have to restore the oxygen and any flavenoids (I think that’s the word) that were incidentally removed with th oxygen. Different brands use different flavenoids.

But for frozen concentrate, they mostly just have to concentrate it and freeze it.

This is why they were staples of many Native Americans diets.

This is very important in vegetarian diets. Some vegetarians are ovo lacto – they eat eggs and milk. So they get their complete proteins that way. Vegans have to be more aware of the proteins they eat.

A word of warning on prepared sauces: watch the sodium content. Too much sodium in the diet has health consequences. For that matter, canned veggies can also have a lot of sodium. Frozen veggies will usually have much less sodium. Read the nutrition label when in doubt. And some sodium is naturally occurring in the crop, so it is not completely avoidable.

To add up on the good advice: whole-grain bread is a LOT healthier than white bread. As in: actually healthy rather than merely fattening.

Being a bottomless pit when it comes to food, I seem to stay sated the longest if my snack includes both a slice of meat (ham, smoked beef…), cheese, and cereal.

Man, now I want a sandwich. My wife looks at me funny when I order turkey & cheddar with mustard toasted and then given lettuce, avocado, and triple pickles, though. The other kind of sandwich would be nice too… I think Jess and Jo will both enjoy if/when they get to try that.

I can’t really dispute Jo’s position on ramen, either, so long as one saves enough for fresh vegetables to boil in and get some nutrition beyond raw calories.

Had a pet ladybug back in college. Named him Alphonse. Shame he couldnt do alchemy.

“Abnormally functional” sounds like a good lead-in for a movie!

We consider ramen noodles stone soup. We’ll put 1 or 2 packs with some cheap canned beef stew and a can of mixed vegetables, and feed 3 people.(Yes, the vegetables are unfit for human consumption if not cooked with soup or stew) Or a can of chicken soup, or do an egg drop, or fix clam chowder with last night’s mashed potatoes and ramen and maybe some gravy mix, and/or velveeta for some thick ‘tater’ soup. Pretty much ramen and raid the fridge.