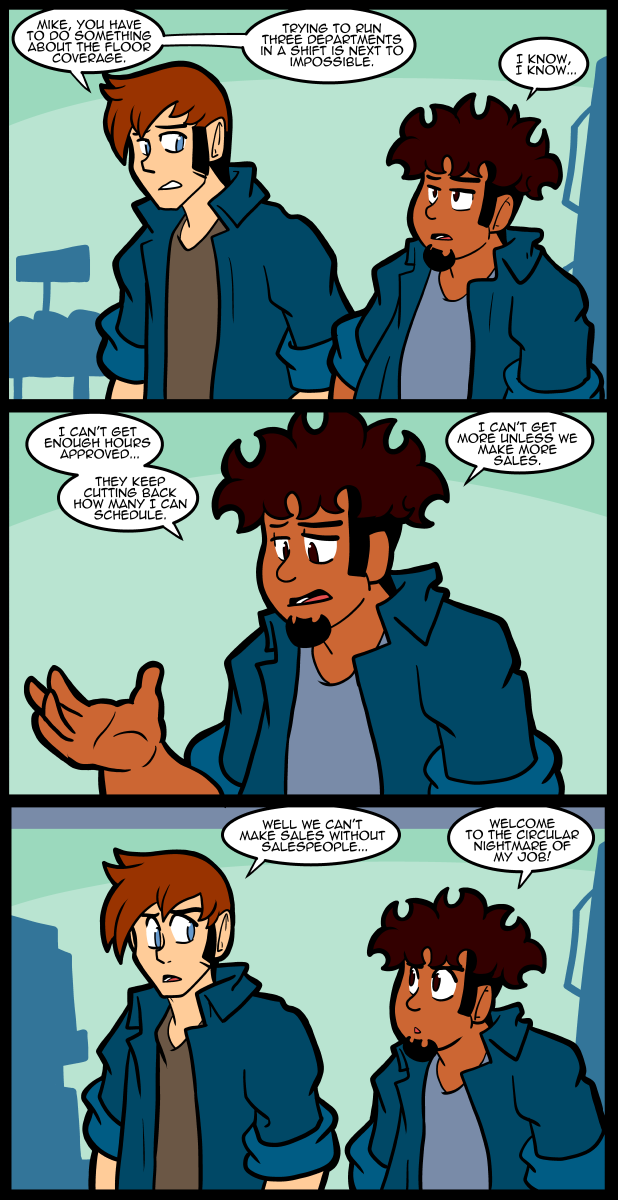 We used to go through periods like this back in the day. After losing a few people we’d get stuck in this feedback loop. I remember many nights running 3 departments by myself. I’d end up with lines of people with questions and you have to deal with each one in turn, because if you divert your attention from someone they often react as if you slapped them. I don’t know what it’s like in other countries, but in America people have an insane level of self importance. Trying to be courteous to other customers while dealing with them is an insult somehow.

Mike, sales dont matter to corporate. They just say that to justify their lunacy. Our store had top sales in the company for almost 2 consecutive years but the first time we had lost 5 people at once suddenly we didnt have money to hire anyone else or even give overtime hours to the people still there. Which, among other reasons, lead to the downward spiral of going from 15% 6-month turnover to (a short peak of) 93% 6-month turnover in a little over a year. 93% of the store had less than 6 months experience at one point. The remaining 7% were pretty much management, old ladies too hardened to care, and people like me who weighed the safety of a secured salary vs job hunting with no other marketable skills.

It’s time to bring in mobile payment kiosks! Let people run their own checkout functions and then just give everybody a baseball bat at the only point of exit to prevent shoplifting.

Retail clerking in the future will be much more entertaining because the customers no longer need service; they answer their own questions with smartphones and Amazon reviews, and they can run their own cash register with a mobile payments system. About the only thing left for meat clerks to do is bludgeon thieves, and that’s something most clerks have been dying to do for years anyway!

Mobile payment kiosks are already a thing. But lol to the idea that you can stop all thieves with a baseball bat. True thievery is more clever than that.

As for corporate mentality, it’s about making money and saving money. Employee welfare is just a mandatory cog in their wheels until they find a means to replace that cog with something more self-sustaining and which does not require a constant bitching about pay raises.

Jackie, I really hope your condition improves. And I know you probably don’t agree, because I wouldn’t if it were switched, but as a patron I feel like I’m paying you back for the smiles and laughs you’ve given me through your comic rather than you owing me anything for it. I feel like I know you in some weird way through your characters, and so I worry for your health as I do for any other friend. How you continue with the comic and keep it at this level is beyond me, but it brings me joy and lets me know that an artist whose comic has touched my life is still living his. And if my contribution helps in that, all the better.

Jackie go do what makes you happy. Go get everything straightened out. Know that we the fans support you. If you need a break that’s fine, get you health squared away. Dead authors make no updates after all. I’m rooting for you

Corporate: Do more with less or else…

And for some stupid reason, we expect politicians to fix this.

Especially when some of those current politicians ARE Corporate.

I’m being Generous. Like so fucking Generous I should be the freakin Element of Generosity.

describing how my girlfiend’s previous job was to a T

Girl friend, girl fiend, occasionally those two people are one and the same.

Take care and do what you need to do for you. If you need a break, we’ll be here when you get back. Virtual strength from the lowlands.

That episode of heart racing sounds a bit like atrial fibrillation where the various heart chambers get out of sync and the heart races like you’ve had an adrenalin rush. I had it once from a combination of heat stroke and caffeine overdose. Going to sleep can reset atrial fibrillation. Being overweight and sleep apnea are associated with AF.

Do what you need to do to stay alive and at least somewhat happy.

I enjoy the comic, but I don’t need you to be a stakhanovite comic artist.

Hi Jackie,
Just while I’m begging to write, I’d like to say:
Sometimes, [ I can be clueless, to when people are feeling emotions that I am not, and sometimes I’m clueless to what some others are feeling sensitive about], so- I’m writing to try + be sensitive + supportive about problems, but I might totally mess it up, anyhow.
Such is the clumsy, Jerry Lewis/Buster Keaton-screwup, that controls some of the social skills in my mind. *shrugs*

Anyhow-
fwiw, I only know stuff about your comic + your medical issues from what you’ve writen online, so what I know about your issues, maybe close to nothing.

Anyway: I think the length of your post is a strong indication that- medically, or emotionally, or both, that you have [quite] a lot on your mind, and that you might need to take a vacation from writing/doing Between Failures, so you can address those issues.
What I mean is: your comments for each page are usually about 1 page long, on my screen.
Today, your comments are about 3-4 pages long.

I think that maybe you have written quite a lot, today, because doing both BF, + your off-the-web issues, might be getting to big for you to manage, right now.

I don’t know if you said-that you might take a break from making B.F., but if you need to take a break, please do so.
I might be presuming a bit, but: we love your stuff/your comic, but if you have serious problems happening, please put BF aside, so you can work them out
We, your readers, really like you, but please take a break if you need to. We’d hate to see something bad happen to you.
Please take some time off, If you’d like to. We, your loyal readers, will still be here when you come back. It’s all good.
Cheers, TRA

I second this.
This is pretty much how I feel about it. You are more important than anything you produce; don’t get me wrong– we’re here for the comic, this is where the comic is- this is where we come. But the comic is a web comic, and you are its god, its creator. Without you, pffft. Besides, you are a person, and while there are other creators, yeah- not another who does to us what you do (via your characters). And through your characters, by extension, we know those parts of you that you reveal through your characters.
And that is the you we love. So take care of you, we will wait.
Be as stout hearted as Thomas, as naive as Reggie, and as lusty as Tina, and as sweet and adorbs as Jo, because you are already that. And that is what we love.

Reminds me of the hell that is local government work; everything’s arse-backwards and you can’t do shit that works because it’s against the rules.

If you need to take a hiatus, take it. I have the comic bookmarked in a folder with other daily comics I read. So you get my page views daily no matter what!

Self-importance is very much a localized condition. In Nebraska, depends on where you are, but most customers allow other customers to butt in temporarily if they have a really quick question. When I worked at Best Buy, it was not uncommon for me to be helping someone find something, and another person would stop and ask if he could ask a question really quick (like, “Where are the video games?”). No one got angry, in fact the interrupting person would often apologize to the other person for interrupting.

Now, when I was in France and England, holy shit were people angry about everything. Everything was a slight – walking on the wrong side of the sidewalk towards another person was treated like you were about to assault someone.

So being self-important is more of a human trait tied to a location.

I think you should get yourself better before worrying about the comic, we all love your work and you, and we can wait a while for updates, you would not be the first to take a hiatus from writing/drawing so don’t worry about us, we support you in anything you do.

@crave:
Take care of You.