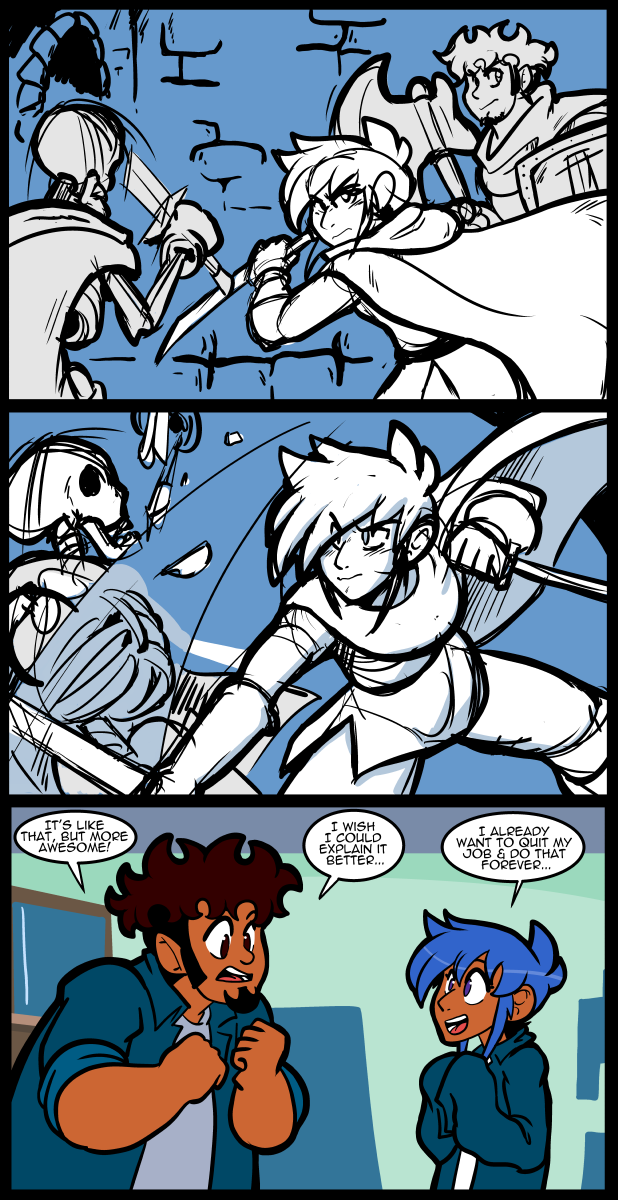 A picture is worth a thousand words, so Mike really must have been explaining things excruciating detail.

It’s kind of funny but I’ve seen people like Dan Harmon doing things like D&D podcasts and shows now, but webcomic artists were trying the very same things seven or so years ago. I guess they were just ahead of the curve, but I wonder if he was inspired by some of that stuff. It’s hard to say. People like him play that sort of thing close to the chest so they don’t get called out for stealing ideas. Rightly so really, because if youtube is any indication people come up with exactly the same ideas at the same time without ever knowing of each other all the time. Then, you get the copycats and things become impossible to sort out. Keeps down the litigation a little bit. Penny Arcade tried the D&D thing and PVP, I seem to remember they got Wil Wheaton involved at one point. He’s always popping up in stuff like that. I wonder if he’s ever been on the Dan Harmon show. Seems like Chris Hardwick might have done something like that too. He’s kind of a nerd media slut so it wouldn’t surprise me. In any case it’s kind of sad to look back and see that people just missed their window for success by being savvier about things too quickly.

I decided to just get weird with this post. The minimal color thing might be how I do the in game stuff for when they actually start playing their game just so it looks different enough to tell it’s in their heads. I dunno. You roll the dice sometimes and see what happens.

I predict that the RPG players are gonna jump all over that! :)

I like Mike, + whomever, in their action scenes. :D

We’ll never be as awesome as our little plastic avatars

Cast-lead-avatars-carved-with-X-acto-knives-painted-with-Testors’-Enamel avatars, if you please. Someone spent more hours making the lead figures than he did playing the game, but I don’t remember Who that possibly could have been, …. (Cough).
Against skeletons, a sax is pretty effective. The Viking sax, I mean. Not Bill Clinton’s sax, that’s just for the blues.

According to Tunnels & Trolls, the Sax is a dagger, so it can be dual-wielded without minuses to-hit.

And you an play, “The girl from Ipanema ” on your Sax, too!

Embrace the club, Jo! Daggers are a *terrible* idea against skeletons!

Just because the game system says blunt weapons have an edge against skeletons doesn’t mean clubs are the end-all, be-all answer to slaying them. I killed plenty of skeletons in Demon Souls with either the Falchion or the Makoto (the katana).

Heh, I just call on the power of the “Bright Side” and the skeletons end up “Dust in the Wind”. The bigger badder undead types get to stand in the spotlight. I have Demon Bane, my walking stick aka light mace, for the up close and personal interactions. For the rest “I” say their prayers …. hee hee

BOTH of them have slashing weapons.

Dagger? I thought she defeated that skeleton with her icy stare. It looks like all she did with the knife was defeat the skeleton’s sword.

I actually really like the stylistic difference you went for. It really sells how different it is between their reality and their imaginations, and the simpler looking style makes it (seem) easier to make dynamic scenes. I especially like the extra shading detail in the second panel, makes it pop super nicely.

My favorite D&D podcast is “Critical Hit” by the crew at Major Spoilers. It’s what I look forward to downloading every saturday

Digging the minimalist style for the D&D campaign.

Jackie had asked, on twitter, about a hysteria that some religious people got into, over D + D games, in the 1980s.

I’m not sure which event that Jackie is looking for, but the wikipedia article, titled-
” Dungeons & Dragons controversies “,…..talks about [a lot] of D+D controversies, if you want to read about these controversies.

DM Greg Dean in Real Life Comics, back when it was still B&W: “A dragon eats you.”

Have to say I’ve watched a bit of “Harmonquest” and I wasn’t impressed. Just, lots of dumb jokes and at no point does anyone take the game vaguely seriously. It reminds me of that one person in seemingly every D&D group who wants to be the “zany drunk” character, but literally everyone is that person.

Call me stodgy and stiff but I always felt like a serious game can provide its own levity simply by the kind of craziness that can happen naturally, without having to inject “random” into it.

Ive only ever seen ads for harmonquest, but I heard the producer talk about it at length and it seems like the comedians he knows for the show don’t really get the point of it at all. That strikes me as tedious. On the other hand I’ve heard of some other shows where they use actual seasoned players who get it, like Patton Oswald and that.

I look forward to seeing how the characters play the rpg. also mike enthusiasm is amazing

@Crave:
I, for one, like the minimalist stylisation of the game-play, thanks.

Only 7 years? Hmm… They weren’t around when I started reading webcomics, and I read a lot, so yeah, I guess you’re right.