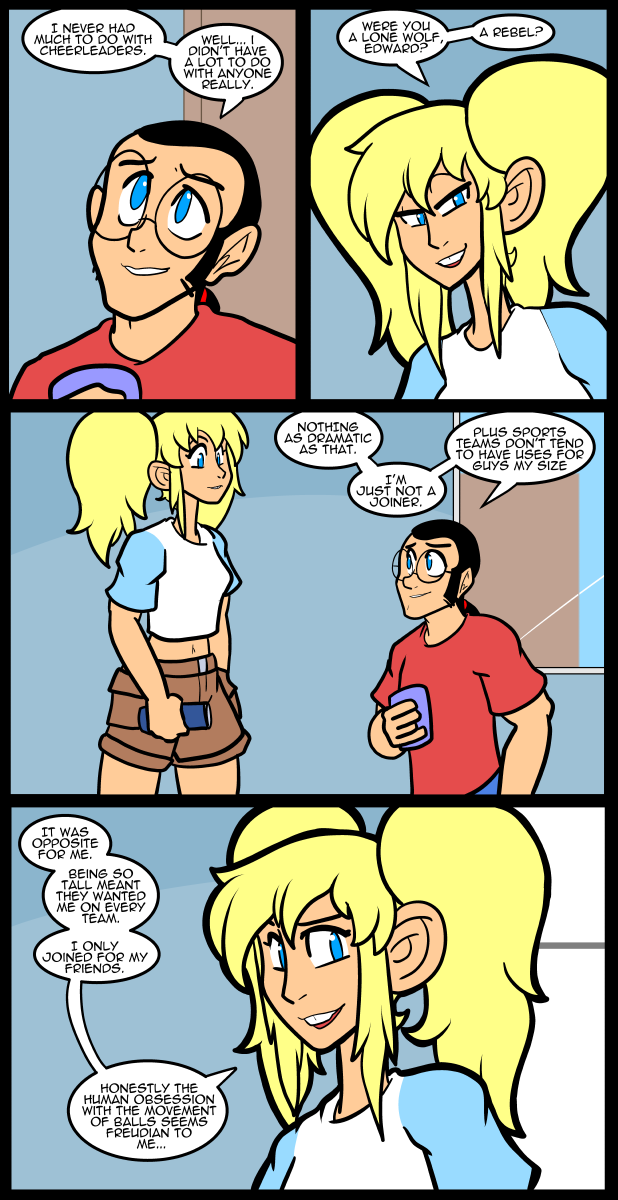 I don’t know if anyone will catch the Pee Wee’s big adventure reference, but if you do, yes that’s what it is. I’ve actually used it more than one I think. Whenever someone say something about being a loner or rebel I think of that scene.

My bad foot has been bothering me for the last few days. I’m not sure why. I expect it’s what I’m eating. Food that doesn’t irritate my problems is so much harder to make than something from a can… It all requires time and effort I don’t have to expend on something as trivial as my health. Vegetables don’t keep for shit and I can’t just go get them whenever I like. It’s not like I don’t like them either. I will happily eat a pile of onions, peppers, and zucchini as long as there’s a little sauce on it. In fact my favorite foods are basically just those things. A little chicken in the mix is fine, or beef, but not mandatory. Anyway, eventually all of this poor living is going to catch up to me and kill me. I’ve only gotten by this long because I’ve never drank alcohol or done drugs, but there’s a limit to what a body can handle even if you don’t actively throw things at your liver it doesn’t enjoy.

So, will naughty Nina be cosplaying as a nurse anytime soon?

I guess it’s only fair if Ed has checked hers, she should check his …

Ed looks like he could have been a high school wrestler. Look at his arms! He’d have been matched against competitors of similar size.

he has a pretty stocky build, wrestling might have actually been bad for him. Maybe he’d do well in greco wrestling but he’d have probably been in a high weight class due to muscle mass and without the reach. he would probably have done well with baseball though

Speaking from experience, being small in bigger weight classes can drive your oppents nuts

also speaking from experience, getting cradled and stuck with someone with long reach is a really big disadvantage unless you’re absurdly quick for your build

“I’m just not a joiner” I really like that, I’m probably going to phrase it like that from now on

Like the Beck video said:
I’m not a dreamer. I’m a router! Things are gonna CHANGE I can feel it!

I think people’s obsession with ball movement must be considered as testismony to our descent from hunter’s of the nomadic savanna cabbage.

The hunters will have to throw some sphericals, if they want to catch anything.

Things may get hairy for awhile, but I’m sure they’ll get a round to it …

Re: “hunter’s of the nomadic savanna cabbage.”
Recent excavations have shown that only in reletively recent centuries have the cabbages been very sphere-like. They have been bred toward a truer sphere shape from an oblate spheroid, more and more like an American football” the farther back you travel in time. The more advanced the civilization, the more like a modern soccer ball the savanahs produced.

While you’ve head in direction I didn’t expect, I look forward to watching you roll with this …

Wheeeelll, if you peel off the cabbages leaves, you can stuff them into a roll, lacking cabbages, you can substitute grape leaves,… Hence the culinary term rolladen,…
But you see that more selective breeding with the cabbages and lettuces, like ice berg. Many melons still have not been domesticated and retain their oblate shape. This is the rough choice our ancestors made in domesticating the cabbages, they lost features like the fur, and the snout, and the aggressiveness found in the more primitive vegetables, like the kiwi fruit, but gained the more useful sphere shape. It’s the very same thing with the Siberian Domestic foxes, … Google it if you don’t know about these. Shorter snout, less aggressive, rounded ears, just like domestic dogs, more cylindrical like the dachshund, or spherical like the pug, and Pekingese.

Domestication syndrome! … and I just used up a little more of my life looking into the domestication of cucurbits and cabbages …

Don’t domesticate your vegetables?
Is that what British people mean, when they say:
“Don’t play with your meat and two veg”? :)

From an AC/DC song:

“Some balls are held for charity
And some for fancy dress
But when they’re held for pleasure,
They’re the balls that I like best…”

If your name is on the guest list no one can take you higher. Everyone admits I have great balls of fire

Frozen veggies will keep for weeks, and are almost as nutritious as fresh. The texture isn’t fresh, but for some it’s close.

And frozen peas you can eat frozen, especially on hot days.

frozen veggies, mebbe? keep better then the rest, and prolly could find some of those. or freeze em yourself, mebbe.

Hmmmm I’ve made several posts and none show up. Have I been banned?

Ooops… got nabbed by an automatic system it seems. :-)

“Food that doesn’t irritate my problems is so much harder to make than something from a can… It all requires time and effort I don’t have to expend on something as trivial as my health.”
This is disturbing. Nothing is less trivial than your health.
I dearly love your comic but you should stop complaining about the choices you make. I was on the same path as you, cleaned up my diet two years ago, and can now do 1-handed push-up @48yrs old without working out once.

Please take care of your self.

Well others have noted that frozen veggies keep well, so that’s always an option. I personally like roasting frozen veggies. A bit of oil, some seasoning and about 30 minutes in the oven. They’re so delicious even my kids will eat them.

Or you can always do what my bachelor friend does. Once a week make a huge batch of something nutritious and freeze it in individual portions. Then you have a healthy, tasty meal that’s a few minutes from ready

Mmmm … broccoli or cauliflower, tossed in a little olive oil, garlic, pepper and salt and roasted is ridiculously delicious …

Though he’s still a prominent figure in the common perception of psychology, Freud isn’t held in high regard anymore with actual practice. I’m working off of vague memories of bare-interest research, but something about him being drug-fueled and later, better psychological studies proving him wrong.

His importance is mostly in advancing ideas at this point than the ideas he actually came up with at this point. He’s more of a pop culture touchstone for psychology now as he applies to the common people.

Smart and sexy she is.

Dammit, Nina seems interested in something I used to be. :p

On a lighter note, last panel made me cackle! :D