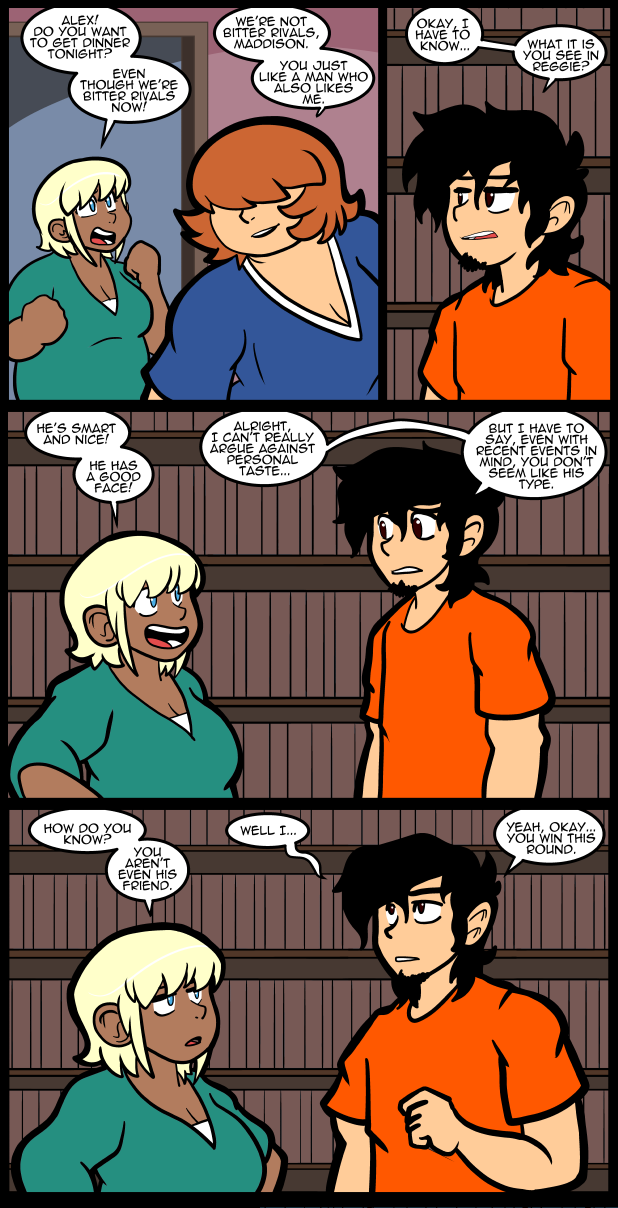 In case you need a refresher on the love square going on with Alex, Maddison, Reggie, and John. Maddison may not be the brightest bulb, but she can still light the room once she warms up.

The fireworks were nice. For a little shit town they put on a nice display. I like watching fireworks on the fourth. It’s one of those things that just doesn’t work on tv. You need to be there. I’m not happy with the state of the nation in general, but I still appreciate the advantages I’ve had having grown up in the U.S. I’ve seen a lot of rights that we took for granted deteriorate over the years though. The intense desire to shout down people who don’t agree with us needs to be resisted. Not only because you have to protect the rights of the worst as much as you protect the rights of the best, but also because when the worst people stay silent it’s much more difficult to counter their actions. People love to talk and if you let them they will tell you exactly what it is they intend to do. You can take that information and use it. So listen.

Not really… as if being someone’s friends is a necessity to know what type of girls they like. Observation skills are enough.

John was just to slow to retort, or decided not to go there (recognising in advance that she would drag him down to her level and beat him with experience).

I love maddie, she is a savant idiot in all aspects

“People love to talk and if you let them they will tell you exactly what it is they intend to do. You can take that information and use it. So listen.”

No one talks about their intentions around a Harkonnen… they don’t need to either – if a Harkonnen wants to know something, he’ll either spy or torture it from you ^^.

Ah ha, but what if they don’t know you’re a Harkonnen!

For every IQ point she lacks, Maddie seems to have an EQ point.

It seems more like 10 INT, 18 WIS to me, but Maddie seems to be more druidish than sorcerer-ish.

You can ask someone who grew up someplace else, read a book… there are many ways to know information second hand.

Our little town had a fish and calf fries dinner and BYOF- Bring Your Own Fireworks Event. Kinda lame even for here.

Thank you — I learned something… well interesting if not useful tonight. Calf Fries: same as Rocky Mountain oysters or Prairie oysters.

Counter argument to her last point:

Sometimes knowing someone is why you are not friends with them.

The longer this series goes on, the more I start to think that John is this comic’s equivalent of Yamcha. He never has a chance, haha.

Actually Yamcha is the yamcha of this comic too. He’s been laying in a crater, just off camera, for the entire run.

I’m surprised to find myself shipping Maddie/Reggie now more than Alex/Reggie. Granted we haven’t seen Alexandria’s date with Reggie yet, but the “on-screen” chemistry of Maddie and Reggie is really fun.