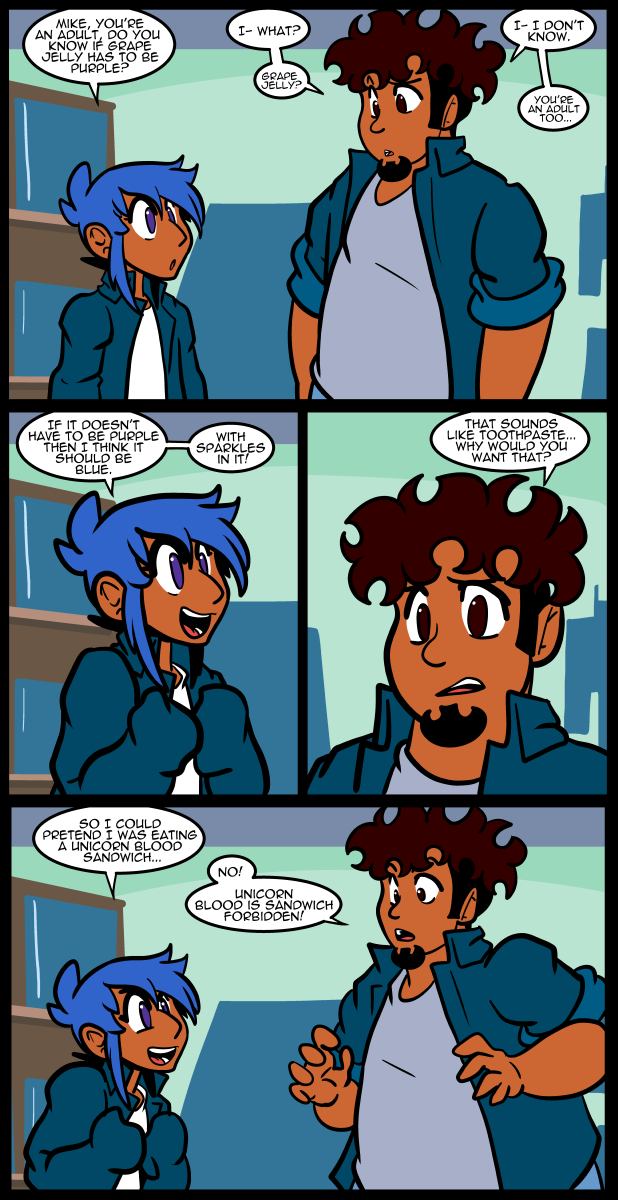 This happened because I was eating a sandwich and thought the jelly looked artificial.

I usually watch youtube on my PS3 and it’s not a very good user interface. It’s kind of like TiVo used to be in a way because it tries to guess what you want to watch over time. The phone app is similarly bad. Right now youtube is convinced I’m a gay, men’s right’s activist, who loves sargon of Akkad, Jim sterling, and Disney theme parks. It also thinks I’m potentially alt right. It was trying to shift that way for a while but after I accidentally fell asleep and it was playing the Jimquisition all night one night it went ahead and made the call. I admit that I’m a hard guy to read. I bounce about from topic to topic and research both sides of an argument so that has to be confusing to an algorithm. But I also feel like it should maybe make some guesses based on my subscriptions too. I recognize that this is not a huge problem to have, but I think I’m getting radicalized by these particular content creators.

I don’t hate Jim Sterling. I don’t love his persona, but I do find some of his content interesting in spite of him. I also feel like he has done some good in his arena, so points to him. I found the gaming historian via his sidebar so that was at least worth the rest of the nonsense.

It seems Jo is a closet Slytherin.

Else she is hosting Lord Voldemort in secret…..

I’m reminded of a Dwarf Fortress where I had a herd of unicorns wander into the above-ground courtyard and get attacked by my guard dogs, which injured them but couldn’t kill them. They ended up running all around the courtyard in terrified circles before they finally found their way out. There was unicorn blood and puke everywhere, and the dwarves tracked it all over the fortress.

Could just be the exact color of Vaseline and be white grape jelly, like how white grape juice looks like applejuice kinda.

I do make “white” grape jelly though it is actually more of a pale translucent green – very yummy by the way.

In response to the strip’s title: *clears throat*
SKULLS FOR THE SKULL THRONE!!!!!!!!!
also
WWWWAAAAAAAAAAAAAAAAGGGGGGHHHHHHHHHH!!!!!!!!

I hope we won’t be heading in that direction!

You know there are other better chaos gods. There tzeentch the god of change. There sleenesh the god of pleasure and then there’s nurgle, the god of decay. In my experience nurgles the best of the lot

But Khorne is also the god of courage, justice, and the will to fight injustice. And in fantasy for a couple of editions he was also the chaos god of mercy. He’s not just the god of anger. Although sometimes he forgets this fact. Meanwhile, Slaanesh is also the god/dess of rape, drug abuse, and cannibalism. Nurgle loves everybody, but he shows his love by turning you into a walking puss ball of a couple thousand (probably million actually) diseases. Tzeentch meanwhile is the god of trolling everybody and self-sabotage and screws over his own worshippers for a couple laughs. If I have to worship a chaos god, I’m going with the only one with a sense of honor and honesty, if not humor.

I hope that here won’t be beheading in that direction, too!

TEETH FOR THE TOOTH FAIRY!!!!

Also “Milk for the Kornflakes”

Blood and souls for my lord Arioch!

What no skulls for the skull throne?

We still have Friday to look forward to…

BLOOD FOR THE BLOOD GOD!
SKULLS FOR THE SKULL THRONE!
MILK FOR THE KHORNE FLAKES!
…
I f*cked it up!

Actually the dialog doesn’t quite match; I remembered it wrong. But that’s what popped into my head. I was remembering this scene from _Star Trek III_: https://www.youtube.com/watch?v=W3c9wtbQTZ4

Anyone else hear about the .hack//G.U. remake coming out? I’m so stoked about this!
Sidenote, I just came into possession of D&D 3.5 player and DM books, along with a bunch of character sheets, and a fuckton of dice, so I’m all dressed up for the D&D party (but I first have to find the party to join me.)

You’ll want a Monster Manual, too

Believe you me I do.
I would prefer to have the more current versions, but I got lucky getting these.

Made me think of this comic: http://www.wastedtalent.ca/node/1445
Seriously, though, the sparkles had better be digestible. You don’t want sparkly poop, heck you don’t even want to *think* about sparkly poop. But I bet you’re imagining it right now!

I was having a meal at my step-nephew’s one night when my sister in law actually said,”I was kind of worried about my blue poop until I remembered that cake the other night with the blue frosting.” TMI normally, but in this case I said,”I’m actually kind of glad you mentioned that. I was wondering.” We’d all eaten some of the cake the night before.

It’s worse when you eat red beets. Those will turn both excretions a disturbingly blood-like shade of red. Usually end up scaring myself until I remembered that I ate those earlier.

I can watch Youtube on my PS3? I was completely unaware of this.

If you think grape jelly looks artificial, you should see how Marachino cherries are made.

They literally bleach cherries. And then dye them.

Ugh, That looks like Aim toothpaste, to me! :D

That reminded me: I once went to a cafeteria that had boysenberry flavored Jello.
It was so dark red, it looked like [black jello]! :p

Sooooo glad I never updated the youtube app on my phone after they mandated a ton more “permissions”… Heard the new ver. was horribad, but didn’t know it was creepypasta as well.

Nothing is true. Everything is permitted.

And that’s why if there’s a possibility i might fall asleep i put on a playlist instead of letting youtube do it’s own thing. That said, i’m not sure about the other youtube apps but i know on the music app you can restrict the app from jumping around and stick to what you usually listen to (kept going to electronic and techno music for mine) so check the settings maybe there’s something similar there.

As someone who has made grape jam from scratch, I assure you that it has to, by nature, be purple. Unless you want to go through some ugly chemical process to remove the natural purple color (see the above post on Maraschino cherries) and re-color it.

Youtube thinks I’m a meme addicted gay right winger too. And I don’t mean the 12 year olds with Minecraft avatars in the comments, but the algorithm. I mean, it doesn’t affect me because I ignore the home page completely, but it’s funny to see the persona being created purely by chance as I click on interesting thumbnails.

I’m not sure how somebody didn’t mention this already, but there are many kinds of jelly. Blueberry jelly is definitely blue, and I’m pretty sure I’ve seen other varieties of blue jelly.