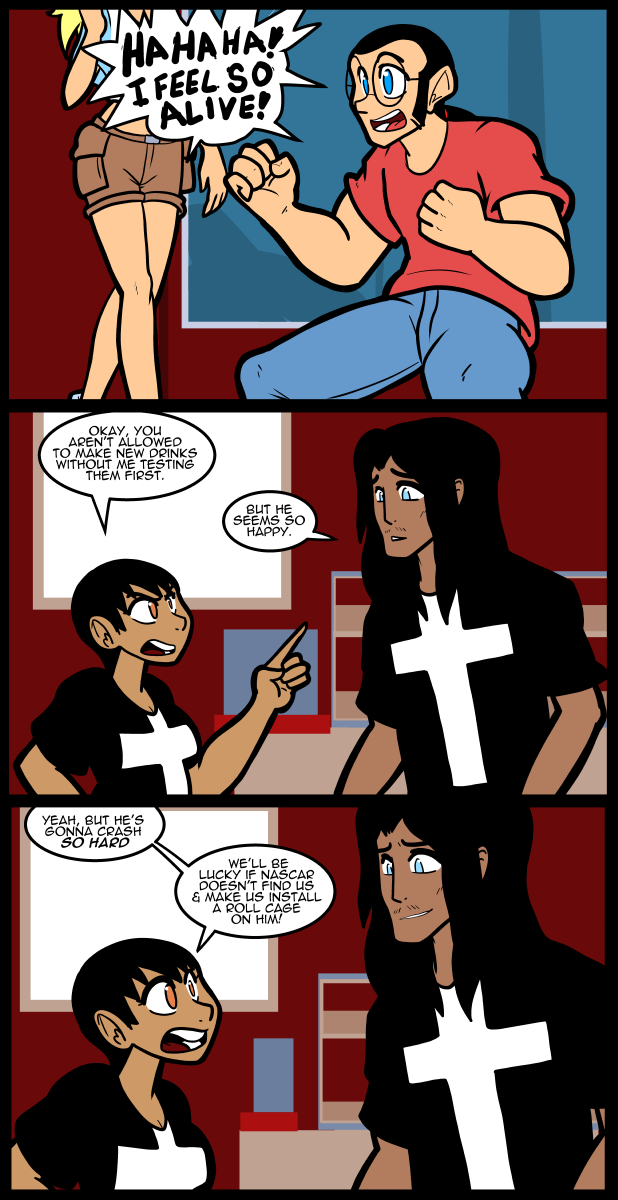 I feel like the partnership between Evrina and Ramon was not fully mapped out before they started it. If Evrina truly was sent to him by god then he may yet come to regret the prayers that caused it.

I finally finished listening to the last Game Of Thrones book that has come out so far. Excepting the one that’s about the history of the world anyway. The series so far ends a little before the end of the previous season of the show, so I’m not sure how close the two things are going to run from here on. I have to say, the books are so much better than the show. The show does a good job in many ways capturing the general feel of the books, but it falls down in several ways. The greater emphasis on the sex for a start. There is sex in the books but it’s part of things in a ways that doesn’t dominate the scenes the way it does in the show. There are also many more characters with far more nuanced goals. A few characters are deleted, or rolled together into new versions of existing ones for the show, which is a shame. Some of the best characters have very small parts in the show and some of the less important ones have far expanded ones. In particular Barristan Selmy is a huge influence in the books but he’s mostly glossed over in the show. It’s really unfortunate because his arc deals with a lot of aspects of aging that aren’t usually looked at in fiction of this type. That’s also true of Cersei Lannister, although she’s younger and a lot of her character arc is intact. Her character often is used to illustrate how a woman’s perceived value lessens with age in the minds of some. In any event, if you’re a fan of the show I very much urge you to listen to the audiobooks if you don’t have time to read the books. They are a much more richly detailed telling of more or less the same story so far.

listening to audiobooks has helped me feel less disconnected from humanity. It was reaching a point where I was starting to really lose my grasp on the mundanities of everyday life that I use to create. Even though the GOT books are fantasy they are very grounded in the day to day bullshit humans always experience regardless of setting. I had come to a point where I was essentially taking in no new information and forgetting what it is to interact with other people at all. A creator needs to experience the work of other creators and setting aside time to do so is important if you intend to create continuously. I still piggyback doing one thing on top of another but it’s in service of my greater goals at least. It is very difficult to convince myself to take time from my business goals for “fun”. The constant fear of losing everything makes me want to throw myself into comic related activities all the time, which is ultimately detrimental to me mentally and physically. I can work faster now than when I was at my weakest state so little by little time opens up for me to take a second to look around from time to time. I’m still running with no buffer, but it’s not something that keeps me from sleeping the way it might have even 5 years ago. I am confident enough in myself that I know I can make something in time even in the most dire of situations. It’s hardly a solution, but it is valuable in some way. I worry less about everyone abandoning my work than I used to, although still quite a lot, if I’m honest. Just enough less that I’m not shaking myself awake in the middle of the night over it. Little victories slowly adding up over time. That’s how I have to do things. Small wins in the face of huge failures.

I’m the opposite when it comes to audio books. They just deem so impersonal to me.

I think it’d be funny for edward and Nina to buy a couple of resurrections on their way to the store one day and just have everyone deal with it.

Oh, this arc just keeps getting better. Now I want to see what Ed will look like when the crash hits him.
Or what the rest of the cast would look like if they’d had a resurrection.
My face kinda hurts I’ve been smiling so hard at this.

I wanna imagine Thomas knows Ramon as he seems to know just about everyone. But that he generally avoids him due to the last time they hung out, Thomas tried a drink he made and has entirely no memory of the following 48 hours after testing said drink.

Ed in that first panel reminded me of this song… https://www.youtube.com/watch?v=VzVbFBRnk_s

HA! How long have you been sitting on the “install a roll cage on him” joke, ’cause that’s killin’ me man.

That roll cage line caught me off guard, well put.

As far as the books/TV series, they’ve pretty much split from the point of the last book/a full season ago. Martin is still involved, but this way he’s basically doing 2 versions of the story at once, so the TV folks won’t get book spoilers early, and the readers won’t get any more show spoilers. It’s kinda odd, but whatever works works (I will express my ire at the show apparently never introductory Strong Belwas, as he was both entertaining, and pretty important after his initial introduction)

Jesus, where I can get that coffee, Crave? Gods know that I’ve never felt an effect like that, and I drink two or three black expressos everyday! XD

I’m not sure you really want a drink like that, man. It sounds like a lot more than three espressos. People don’t take caffeine too seriously, but a lot of people have been killed by going overboard with it.

I listen to a lot of audiobooks because my job requires me to travel all over my state and they have been my savior.

If you haven’t yet, I’d highly recommend The Dresden Files series by Jim Butcher and The Kingkiller Chronicles series by Patrick Rothfuss.

Both are on audiobook, though I can’t vouch for the quality of who ever voiced Patrick’s stuff. The guy who did The Dresden Files was pretty good though.

Damn, now I have to!

Yeah, they don’t map out their *own* relationships. Just imaginary ones for other people.

In this case that means they didn’t establish a clear chain o’ command before starting their venture.

We’re all links in the chain o command

That last sentence, so close. Small wins … BETWEEN FAILURES.

PS. “A creator needs to experience the work of other creators and setting aside time to do so is important if you intend to create continuously.”

Yes, charge up those batteries. Take the opportunity to meet more people too. One advantage of being a writer is that annoying people are just more grist for the mill.

Just keep updating more regularly than some other comics of note,(which shouldn’t be hard) and we’ll be here.

Dude I wish you lived closer, I’d help you out any time.

This last three or four episodes — and in particular, the PATREON Afternoon Special — has me giggling like a schoolgirl. That ain’t normal!

Oh, yeah, Mr. Hot Rod Lincoln is so gonna crash. Like my Mom did after her 18th birthday (75 years ago, now). The night of her birthday, she went out with some friends to celebrate — 18 was legal drinking age in Ohio in 1942 — and the next day she went to the drugstore where she worked dragging her @$$. Johnny, the soda jerk, knew what she needed: he dissolved a couple of aspirins in a large fountain Coke and gave it to her. Remember, Coke’s formula has changed many times over the years.

Mom said the effect was like having her eyelids on roller window shades. She snapped awake and zoomed around the shop like an over-wound toy. She clerked and cleaned and put out stock like there was no tomorrow — until five hours passed. She hit payback like doing a belly flop into a mud pit. Must have been painful — she didn’t touch Coke for a couple of years after that!

Hm.
I do not doubt your story, or your Mom’s story, at all.

However, it reminded me of the, [there is, or was, enough cocaine in Coca-cola to make you fly higher than Mount Everest]-myth, that was still around in the 1980s + 1990s.

www [dot] snopes [dot] com doesn’t believe in the [some cocaine in coke drinks]-story…or, at least, the Coca-cola [company] stopped using ingredients with cocaine in them, probably around 1906, with the passing of the [1906] Pure Food and Drug Act.

Anyhow- here is a link to Snope’s findings on the “cocaine in your coke drinks”…legend:

Sorry, not to be rude, but at what point did I even mention cocaine?

Coke’s formula has changed many times over the years.

They messed with the recipe for decades, trying different ingredients to regain what the Government had taken away.

Quite so, you had not.

I didn’t mean to ruffle your feathers at all…but your story reminded me of the coke + cocaine thing, as in, what I had said above:

“I do not doubt your story, or your Mom’s story, at all.
However, it reminded me of the, [there is, or was, enough cocaine in Coca-cola to make you fly higher than Mount Everest]-myth,…”

No offense taken. People on the InterWebz do tend to jump to conclusions due to the haste and currency of the medium. (* starts stalking you *)

Cool! Thanks. :)
Looking back on things, I think, in the future, I’ll be a little more cautious when discussing:……..the uses of cocaine in history…..and……[people’s relatives]……at the same time.
D’oh. *looks sheepish*

I appreciate your update frequency. The slowest updating comic I read regularly is Megatokyo. Some weeks I get to read a new panel. You’re a lot faster than that!

“It’s the feeling being Edward Hyde~”

Gah, you made me laugh, laugh so hard my jaw came unscrewed, now I’m in the shop getting it fixed. Dang that was a corker! Well done, Jackie!