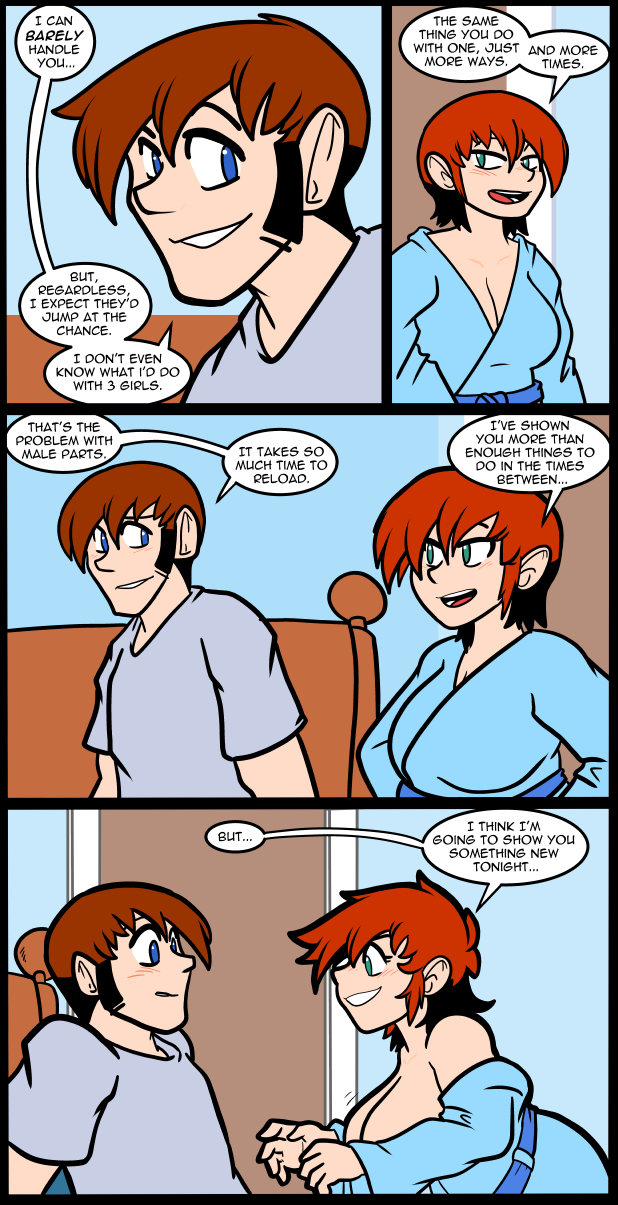 I have no idea what she would show him at this point that he hasn’t seen already. I guess we’ll all have to trust in her prowess on this one and be glad I don’t actually have to find something. X3

As far as I know my grandmother is fine. I’ve been given no further information which generally means everything is okay. Facebook used to be a reliable source for that sort of information but now it picks and chooses what it wants me to see, seemingly at random, so it no longer serves the purpose for which it was originally employed. At this point a text would be more efficient as long as I send it at a time the parties concerned aren’t asleep. I’ve been sleeping at weird times so the two times have not lined up. In any case, no news is good news.

I keep falling asleep in ways that make my hands go numb, which wakes me up and have weird dreams. I don’t know why I’ve suddenly started sleeping like that, but maybe it’s the cold. I have always tended to fold myself up in my sleep and possibly more so when I’m cold. I keep trying to get my sleep pattern aligned with regular people hours but it just keeps shifting like some kind of insane wheel. Still, it’s better than not sleeping at all which is what I was doing before this.

I’ve misplaced my little Lego C3P0 and R2-D2 and it’s driving me mad. As far as I remember they were with all my other Star Wars guys but I seem to have misplaced them at some point. I’ve been through ever container over and over looking for them to no avail. It’s not like I really need them but knowing I don’t know where they are annoys me. In addition to this I can’t remember if I had two little containers that I kept the stuff in or one. If it’s two than I’ve managed to lose one, though that would practically be impossible. I honestly can’t remember how many of the little containers I have anymore. I’m almost certain it was two, but I can’t actually prove it. That uncertainty is truly vexing on multiple levels. not least of which that it makes me feel like my mind is failing me. XD

And here we see the damp and wild Feral carol, ready to pounce at her beloved but seemingly unready prey….crikey.

Well, well, well. Things to show you, eh? Um…what are those things again? Think I was asleep that one time…

Facebook has a feature where you indicate the few Facebook accounts you really care about. On your user page find the “Friends” tab, find the person you always want notifications from, mouse over the Friends button and click on “Close Friends”. Facebook will show a star instead of a checkmark for that user and as long as you don’t have to many of these starred friends you should get all their Facebook posts.

Nice expression in the second panel.

glad your grams is good.

Haha. well jess and brooksie may get theri wish someday. Though on the topic of what she’d show him, and it being tangently related. There are a few “oh my” things one could say.

Huh, I guess there seems to be more possibility for a poly-, or at least non-monogamous, situation here than I thought. And here I was afraid Jo’s omni-interest would necessarily remain fantastical.

Hie thee to a physician! You need to at least get checked for Carpal Tunnel Syndrome. Hands going numb while you sleep is a classic sign. Treatment may be as simple as wearing wrist splints while sleeping. It will very likely get worse, so it’s best to nip it in the bud.

My ex has been using the wrist splints for a long time, and she says they really help. She does a lot of repetitive mouse and keyboard work, and is probably the fastest keyboarder I’ve ever seen.

I”ll just tell you what I told my kids when they couldn’t find something.

“You just haven’t looked in the right place. If you look where it is, viola, you’ll find it.

“Have you tried under the refrigerator?”

I am not sure if that is an expression of terror, surprise or anticipation on Thomas’s face in the last panel.

it can be all three

Well, since it is your comic, I guess that settles it, thanks.

“Fear Boner”. I think I’ll use that, as the name of my next BAND! XD

I bet she’s gonna teach him what a prostate is. X3

Unless she’s already shown him. :)

Enjoy it while you got it. There comes a time when the cannon can’t reload worth beans.

And having to take drugs to get your body to do what you couldn’t get it to STOP doing “Not So Long Ago” is … well, let’s just say it’s depressing and leave it at that.

But you do get a lot of practice on that stuff you can do “in-between failures” (if I may wax ironic). ( I mean, it’s all about her pleasure after all, isn’t it? Mine is reasonably automatic.)

So enjoy it while you got it. It won’t last forever.

OK, I’ve spent the past week on and off reading this comic. I’m finally caught up. I don’t know how I found this anymore but it was during one of my deep nostalgic trips where I look up the old forums and sprite comics I made during my middle and high school days. Sense then I’ve spent my entire work life of 10 years in customer service like this and I have never been touched more by a comic like this one. Its so true and I feel like I know these characters as types of friends, enemies and in between people that I’ve met over my life. All and all I’m kinda rambling cause I marathon’d the last bit and its late, but I just wanted to say thank you for this comic and I’m officially going to be a long time reader. I only wish I was around the whole time and could comment more along the way ^_^

@Crave:
Did You find the droids You were looking for…?

I see what you did there! :D

Love this entire page, especially the last panel. Bought back memories and feelings that I long since tried not to remember. This time though, I felt the warmth of love instead of the pain of heartbreak, so thank you for that.

I’m quite glad that you found your R2-D2 and C-3P0 and that your grandmother is well. As for sleep, I find what works best for me (and may work for you) is to have a ‘wind down’ routine when I am tired and must sleep. I finish that last task I was doing, have a last drink of the night, brush my teeth, and finally get in bed. It could be 10 PM EST or 6 AM EST and it’ll relax me to the point of entering Dreamland soon after my head hits the pillow.

I find a cup of warm milk at bedtime helps. I mix in a little anise syrup for the fun of it.

“The Times Between” could be a T shirt. Especially if it featured Carol and some cleavage…. just sayin…