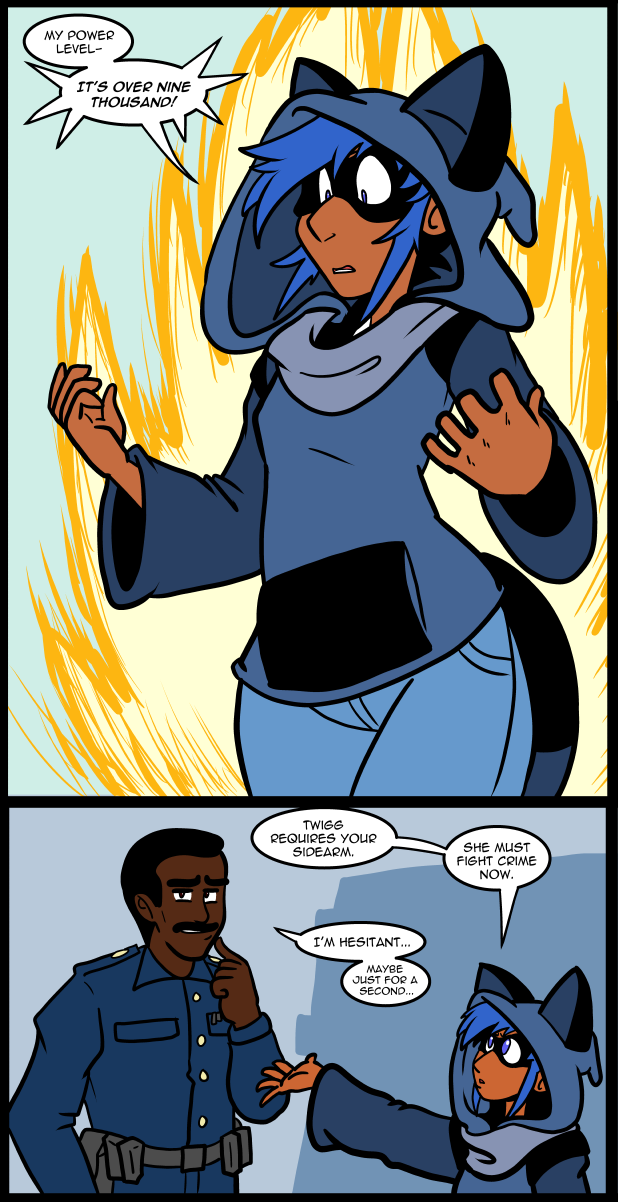 Her new hoodie started out more like a cat, but the mask part made it look more like a raccoon, so I kind of split the difference and it’s not really one or the other. The inspiration for it comes from several similar sorts of things I’ve seen online. Generally they have soft ears that lose their shape but I think these must have some plastic tubing inside to give them some rigidity. In any case it would probably be expensive, even though it’s small enough for Jo to wear.

I have continued the Halloween witch series. This time it’s Jess and she’s wearing something that very much fits her personality. I got the inspiration for her costume from someone mentioning an old movie called Transylvania 6-5000. I hadn’t thought about it in years but I remembered Jeff Goldblum being in it and Geena Davis. At some point Davis starts wearing a vampire outfit that shows a similar amount of skin. I was at a good age when I first saw it for it to leave an impression. I also crossbred it with an outfit Raquel Welch wore on an episode of Mork and Mindy.

YouTube suggested a video about Gamestop horror stories the other day. I don’t know why, but I watched it. It was horror stories in the “this business has terrible management and ethics” way, rather than ghosts. In any case it was wild because the stories were so similar to my experiences with the company. When I started we were an EB Games and things were really good. Then Gamestop was purchased by EB and things went bad. Very bad. The acquisition of Gamestop was weird because it was the smaller company, but what actually happened was that Gamestop ate EB from the inside out like a parasite. The old EB management was slowly let go over the course of a few months and replaced with new people, or gamestop employees. Gamestop has a bad habit of hiring people from other industries into positions of power. What this means is that those people have the wrong set of skills and mindset for selling games. the guy who oversaw our district manager worked for Pizza Hut. So he enacted policies like making sure the windows were always clean. Because in a restaurant you sell more food if the place looks clean and windows are something people unconsciously judge that by. That’s just a single example but it was much worse. Basically the whole thing threw the EB employees under the bus right down the line. Before that time I thought Hastings had terrible management, but Gamestop tripled down on that shit. By the time I was ready to leave I was the most broken down I’d ever been in my life up to that point.
Essentially the travesty that was working for Gamestop is what led me to making Between Failures. I’ve held a grudge against the company ever since, and if youtube is any indication I’m not alone. I basically spent all of last night listening to people tell their tales of woe while I was working. I always sort of felt like maybe it was just me and I was imagining things were worse than they were, but hearing other people tell the same stories made me feel better about that time in my life.

This seals the head-canon for me. Officer Birdsong IS (Super)Trooper Ramathorn.

Nothing cuter and scarier than brooksie with a gun.

No power in the ‘verse can stop her.

Tons of body armor, but never a gun….

Anti-heroes on the other hand carry an insane amount of guns and at least one rocket launcher.

So you’re saying that Twigg-girl, Master of the Mysterious Art of Nin-Jo, is an anti-hero?

I honestly thought the over 9000 meme had run its course by now.

Memes don’t die. The people who remember them do.

Why have you changed your username so often over the last few weeks? Have you decided to turn on me and today is the day? I’ve got this IP as at least 3 regular commenters. It’s fine if that’s the case. I’d just like to know.

Sometimes I choose to be whatever I feel like I want to be. There is only so much I can take under one name.

It’s like “All Your Base”; the classics never really die, but the situations where it’s cool to quote them become much more limited.

I like to beat them into the ground. I am working on the theory that if you do it enough, it will become funny again. In the meantime, I get to drive people crazy, it is almost as fun as doing dad jokes.

Best keep the All Your Base memes for when the subject of alkaloids come up.

Oh yeah, it’s definitely a good idea to hand someone your gun in a store. I think it might have been a good idea to step outside for a bit, but we’ll see on the next page.

A correction: “hesitant”, not “hestitant”.

I tried to watch Transylvania 6-5000 and couldn’t make it past the first scene. Perhaps I should have persevered.

only watch Transylvania 6-5000 in between watching The Rocky Horror Picture Show and Little Shop of Horrors. any order is fine, as long as you keep TV6500 in the middle

So the new hoodie is awesome. Kinda reminds me of one of the characters in Kiwi Blitz. This means only great things.

yeah, the character “Raccoon” is a spitting image. Which, given the events of the story of Kiwi Blitz, makes Brooksie’s lines even more hilarious. So epic!

Well fuck that noise. I guess I have to change it. What a shame.

actually, the hoodie could be considered an homage, but in any case, that particular style is so prevalent in Otaku culture that it’s probably not even copyright infringement at all.

It’s really not that similar; the similarities boil down to ‘eared hoodie on a tiny adorable brown girl.’ Just for starters, Chandra’s is brown, while Jo’s is dark blue.

So what’s a Kiwi Blitz?

I’m right there with you on the EB/Gamestop thing. I got my first job at an EB games JUST before Gamestop started to take over. I watched as petty things like “Customer Service” and “Games Knowledge” were slowly sacrificed to the god of Preorders. Didn’t matter if it was a 5 year old trying to buy a Gamboy Game with quarters, it was my job to try to squeeze $5 more out of them.

Eventually they “Fired” me (by not giving me a single shift in 3 months instead of asking me to leave) for not having good enough Preorders or pushing that stupid Gameplay Guarantee disk protection Racket on people.

When I started there I thought it’d be a dream job, now I hate to step foot in those places.

Two things one I was that far off. Two. Brooksie needs a gun to keep herself from harm

The poor people are burning in the sun

They ain’t got a chance.

oh god the hoodie is so perfect on her.

Just so long as she doesn’t start calling herself “The Coon” and talking like Cartman.

Reminds me of Sly Cooper, in a good way.

She can team up with Squirrel Girl now.

So, that Mork & Mindy episode you linked is the ONLY one I’ve ever seen, so I knew exactly what you meant before I even clicked the link.

The Gamestop by where I live has had a decent crew and the store isn’t awful from what they tell me. I think the reality is where you live and what the chain expects from you depending on where you live. If you have a huge store in a mall in say Chicago, that’s probably what makes that a Hell. Here, they have such low expectations and goals that they mostly stand around enjoying their time catching up on game news and reading.

hmmm I wonder if Etsy has something similar, I’m sure the pseudo-assembly line sewing sweat shops is hopping on the anime-esque cosplay bandwagon.

round-robin upper management tends to mess up core business. a shame as EB always seemed like a friendlier place than the GS. yet there are plenty of GS employees who’s hopeful small-talk offset the closterphobic workspace