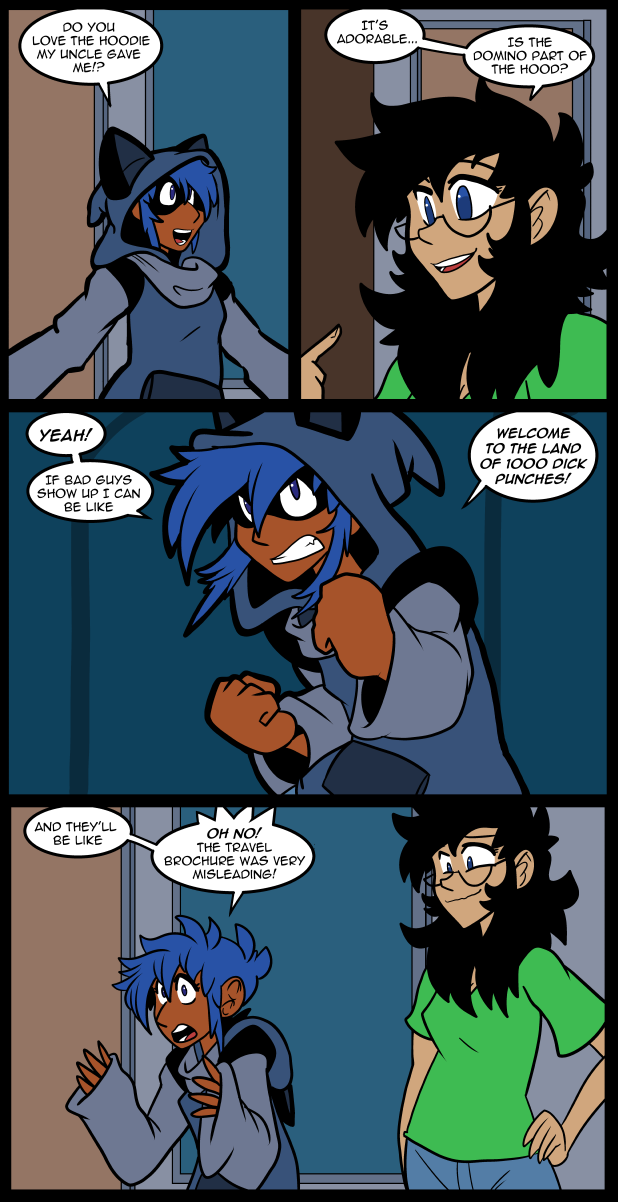 Every so often I think of a punchline with no setup then I have to wait until a moment arises when I can use said punchline. Welcome to the land of 1000 dick punches is one such line, followed by the travel brochure was very misleading. In addition to that I love the idea of Jo putting on the hoodie then quickly taking it off to play both parts in her little play. Pages don’t always end on jokes around here, but I enjoy it very much when they do.

I’ve never been able to write gag a day stuff. What I find really funny often requires a lot of setup and what I find interesting in media is often the stuff that is usually used to get to humor. Between Failures is very much what I like, which isn’t always popular so it’s harder to find. When I started that was very much the case so I just started making something I wanted. Of course I’ve never been able to present it all as fast as I want, or even the way it looks in my mind, but you have to work with in your boundaries and hope you can break out of them eventually.

Every so often I go back and check up on comics I used to read that diverted away from what I used to like about them. Just to see how they are doing. PVP, and Penny Arcade are two I know are still actively updated. I stopped reading PA because I stopped having time for games, so the jokes no longer made sense to me. I understood that it would be funny if I could play the games, but that critical part was missing, so I quit reading. I didn’t write a passive aggressive note to them about how I was leaving forever, I just stopped and hoped they would do okay without me. I decided to check in on a whim the other day and read a sizeable portion of their latest strips in reverse. To my surprise the comedy had shifted in such a way that I could appreciate the humor without detailed knowledge of most subjects. There were a few that were meaningless to me, but almost all of them were funny without some piece of obscure game minutia. It felt very much like catching up with an old friend. They had changed, but the core of what made us friends was there.
They have hit upon a very valuable skill. They can make gamer comics that appeal to people who don’t play games. It may not sound very impressive, but to me, who scrounges for attention, it’s like looking at a wizard. They cracked the code. Appealing to their core while inviting outsiders. There’s a reason why they’ve dominated their market for so long, and they will likely dominate it until they die if this is the kind of game they are going to play. I was genuinely impressed, pleased, and full of envy driven rage, all at once. They aren’t back on the daily list, but I’ll be checking in to see if maybe they have earned that place again… I think they might have.

Domino? like the game?
or is that the name of the lil fask mask thing? I’ve been thinking it was just hoody shadow

Yeah, the name for masks that cover the parts around your eyes is domino.

Yeah. For those who don’t see the masks in- Comic books, costume shops, + medieval costumes, a lot:
A domino/ domino mask, is shaped like Robin…the Boy Wonder’s mask, in the 1980s comic books.

Please tell me: what is fask?

Your story would make a great movie. Speaking on your comments about mass appeal and outsiders. Who would you get to play the parts?

A cast of unknown new actors that look more like regular people.

I have the stature and natural likeability to be a good Ed.

You have no roles for grumpy old fat guys. Obviously ageist/sizeist. I shall write a passive/aggressive note declaring I’m never coming back (and then come back daily to see if anyone noticed)…. XD

That was a delightful joke, thank you.

If that’s not already a hoodie, it should be.

I consistently enjoy your comic on multiple levels. I care about the characters and the story, I like the art, and I enjoy the jokes. Also, your character designs are visually distinct, and your characters have their own “voices”. (In some comics, all the characters talk the same, and that’s boring.) So IMHO your comic started off at a high level (the surprising grey-to-color transition was freaking *brilliant*) and has maintained a high level for lo these many years. IMHO you are doing master-level work.

Perhaps you aren’t getting the images quite the way you wanted them (to match what is in your head) but I like them the way they are.

Both PVP and Penny Arcade are out of my regular rotation. I only read them when someone flags a good one to my attention.

The worst thing about PVP is that it stopped updating regularly. I just stopped checking it after a while.

It’s surprising to me, but one of the things I really don’t like about the current Penny Arcade is the art style; I thought it was just about perfect a half-dozen years ago or so, but since then it has changed from a cleaner style to a more busy and detailed style that somehow rubs me the wrong way. (I can’t explain it; I don’t understand it myself. Shotgun Shuffle went from a less busy style to a more detailed style and then to a crazy insane really detailed style and I still like it… I guess I still care about the characters in Shotgun Shuffle and Penny Arcade never had any kind of coherent story to make me care about the characters.)

As for ending on a joke… IMHO the master of that is Mark Stanley, the guy who does Freefall. That’s an epic science fiction story, set on a planet that is being “terraformed”. The planet is currently not great for humans but in a few centuries it will be much improved. Anyway on this planet there are about 40,000 humans and over 450 million robots (plus the main character, who is a humanoid wolf but is legally considered no more of a person than a robot is). The story has been running almost two decades in real time, and it’s told in 4-panel strips… and pretty much every comic ends on some kind of a joke, often a very funny joke. Please check it out, you might enjoy it.

As always, thanks for making Between Failures.

“As for ending on a joke… IMHO the master of that is Mark Stanley, the guy who does Freefall. That’s an epic science fiction story, set on a planet that is being “terraformed”. ”
Hear hear! Freefall is just about the only hard SF webcomic that I still read, apart from Schlock Mercenary which has the problem that a lot of the characters are assholes. I disliked Chris Baldwin’s Spacetrawler, and his One Way was worse. Dave Kellett’s Drive bored me to tears, but even his original comic Sheldon is nothing like as good as it used to be.

Squids have like eight independent brains, they don’t think like we do, they are All incorrigible,… they’re Squids. See Zefrank’s pastiche video about the squid, it’s mind blowing.

I love Freefall. Two other SF webcomics I like a lot for very different reasons are Quantum Vibe and Crimson Dark — check them out.

I’ll add my vote for Freefall, it’s very well paced, especially if you like your poison a bit engineer-nerdy. I still read Penny Arcade, it’s weird but good. A couple of years ago I got the feeling that Scott Kurtz had lost his mojo when there were a million fart jokes lined up, so I dropped PVP then. But I’ll probably check it out again.

Another comic you might like is Multiplex, it’s Between Failures at the cinemaplex. Seems to be winding down now with a nicely surprising ending.

Jo has infinity on the cute scale

Freefall, Shades of Gray (the one act the alien) and the whiteboard, are my faves, along with questionable content, dumbing of age, and Wilde life. With between failures, this is my daily (m-w-f or tu-thr) list to check. They’re all faves for different reasons.

One With the alien, spell check hates the universe.

Don’t forget Fridays with 4Koma to end your week with at least a smirk if not a chuckle.

Also spill chickens are knot ass goad as they sari they arr.

My mind is trying to draw itself a picture, of what a “knot ass goad” would be! Heh, heh!
Sometimes, I can’t stand having a vivid imagination. :D

Got it.
Brooksie in her blue hoodie + mask, remind me of Raven from Teen Titans Go (R)!

That messes with my head, sometimes.
Imagine a crossover of Teen Titans Go, and the Between Failures crew! :D
Wow!

Y’all remember RSS? I’m still using it, so I never have to go check for updates – they come right into my feed!

I’ve got all my favorite comics (like this one, Dumbing of Age, Something Positive, Goblins, Saturday Morning Breakfast Cereal, xkcd, Zombie Roomie), and some other comics I read that aren’t quite my favorites (spacetrawler, looking for group, go get a roomie, gunnerkrig court), and a smattering of others too. I do still go to most of their sites (with adblock turned off so they get the revenue – although my company may be blocking some of the ad urls), but I never have to remember what day which comic updates. I’m lazy.

Since I’m here, I gotta say it once again: Jackie, I love the comic, I love your blog, and I wish health, wealth, and happiness upon you!

Evil boss lady: ha!
I am immune to this islands festivities!
What- No!!!
Not the CrotchKick Tent!

There is some part of me that really, REALLY wants to spend the time and effort making a travel brochure for The Land of 1,000 Dick Punches…
I’m imagining there are quite a few asterisks on two out of every three words. You only get the full picture when you read the binder that holds all of the footnotes… XD