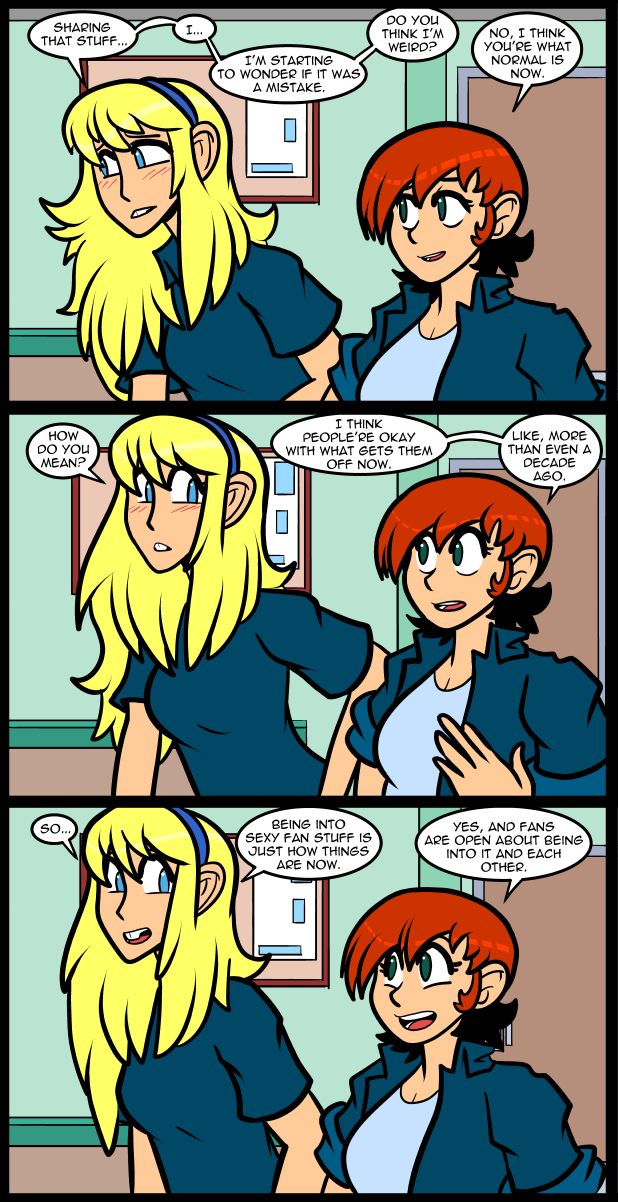 People are, on average, getting less and less concerned about making other people feel bad about what turns them on. You don’t get to choose what does it for you, no matter what some people might try to tell you. The complex web of our minds just seems to decide and that’s all there is to it, until science figures out exactly how attraction works. It really sucks when you get stuck with liking something that society doesn’t accept. I thank my stars that I didn’t get something terrible like gore, or what have you. I like a few impossible things as fantasy and enough regular things that I can have a normal relationship without my fetishes ruining things. On balance my stuff is pretty vanilla and I’m glad of it. I’m also glad that I don’t have to deal with being gay, because it’s still a totally bullshit thing to have t put up with in our society. Why people are so concerned about what other people do with their parts is beyond me. As long as you aren’t hurting anyone what difference does it make?

Nina’s fascination with magical sex is a fun character trait, but I never really thought about it much. Even after writing it in I haven’t stopped to really think through what exactly it is she finds arousing. It’s not on the top of my list, and not super important to the story, so I haven’t dedicated a lot of thought to it. I do think that Nina wants to feel delicate, and petite, but generally can’t because of her height. It’s not like she’s a monster, but she’s taller than a lot of men, so getting that feeling of being wrapped up in someone’s embrace is something she can’t get as easily as other women. The fact that she likes Ed so much is just a tragic irony. That said, Ed could easily pick her up and tote her if he had a mind to. He certainly has the strength. I’m sure they’ll work something out eventually.

Heck, yeah. I’ve even written some.

So … did it involve anyone bearing it all?

Bare bears are too scandalous, for me…that’s why I don’t go to the zoo anymore! : )

So would you prefer that we put each one of them in a teddy?

I don’t know.
I’ll ask the women who wok at [The Kitty Twister Bar], if that’s ok.

Or…In my view…some lingerie outfits look kind of “grizzly” to me.

That seems like the polar opposite of how I expect lingerie to look … though I guess there is no accounting fur taste?

This is my life:
Winnie go out, people “Pooh, Pooh” my ideas of sexy women.

Things I need in my life: “That said, Ed could easily pick her up and tote her if he had a mind to. He certainly has the strength. I’m sure they’ll work something out eventually.”
^That panel

I’m glad someone beat me to it. I would also like to see an Ed toating a Nina.

I wish to third that suggestion. I need to see Ed princess-carrying Nina. And she’d be blushing.

Amen! I don’t think she’d care if her heels were dragging!

I don’t get the impression that she is trying to slow things down at all ….

intended as a joke

Aww man. I feel some feelings here. At nearly 7 feet tall I have been on the receiving end of some…amorous advances from girls like Nina ;)

I think there’s a typo of “people are okay” on the second panel.

“‘guro’ is derived from the word ‘grotesque,’ not ‘gore.’ For example, the works of the artist H. R. Giger are considered to belong in the genre.”

…and slithers back into his hole.

Of all the little details the most beautiful is Nina’s hair unfrizzing as she gets more confortable again. So cute!

It’s usually the uptight ones that are into the totally weird shit. And as you said, Jackie, so long as nobody is getting hurt (well… unless they are into that, probably more “so long as the people involved are consenting to all of the activities therein”), then there is no problem.

Where does ‘scaring the horses’ fall in this distinction?

“Scaring the horses”? Is this a thing to Google that, once you have done, you REALLY wish you didn’t?

No brain bleach required as far as I know … your Google results could vary.

I didn’t actually know where this was from, so I checked, and am actually quite <abbr title="feel free to substitute shocked and amazed“>pleased to report that in the original context this phrase was not just inoffensive, but verging on down-right tolerant!

Note to self, don’t nest other html tags inside abbr-tags!

The version I always heard was something like “I don’t care what they do with each other, as long as they don’t do it in the street and scare the horses.”

For anyone who may have been having difficulties with Google.

To each their own Nina.

Deal with it Nina: blush is the new black.

I agree people are a little less uptight about their turn-ons. Maybe the U.S. is taking an approach, at least in this wise, closer to the European or Asian model. Personal lives are hardly personal anymore. Locations of nude beaches are no longer members-only (even if admission is — there are some people who should never be seen naked). If you’re looking for a cause for this revolution, look no farther than your [cable | satellite | player] box.

My Aunt, (who was not a tall woman) married my Uncle who was about four inches shorter than her. They had a beautiful marriage.

So: when weird is the new normal, then do the sane get sent to an asylum?

There is no “sane”, just different shades of KooKoo.

Wow is this the end? I just binge read the whole lot so far…. What a ride. thoroughly enjoyed the whole thing. I look forward to following this one from now on!

Unfortunately now i need something new to read while bored.

Start this from the beginning again. It works sometimes for me.

Start this from the beginning again. It works sometimes for me. >?<

Oh for fuh- The site said I had already posted something, that I had already said it… Then posted that *after* I made a small “edit”?! I blame my damned double-clicking stupid mouse! If I didn’t need the blasted thing it would have become a smoking crater ages ago!

I usually delete duplicates, but when they go this badly wrong, and the writer acknowledges the duplications, it’s hilarious and I like to leave them.

Some folks can’t make their attraction meet their desire, confined to a dream of chaste romance that abides completely affection-less sex on the side. You’d want to call it ‘transsexual’ if not for disconsonant history being a bother.

Where do my like go to confess this trifle, I wonder? Just to artists of extensive fantasy, I suppose.

“A person’s sexuality is the result of a long, drawn out, complex, series of conscious and subconscious decisions. … The complexity varies amongst individuals…. Some individuals may deliberately stymie some of the choices presented to them, or deny the result(s). …”
“The procession typically begins shortly before the onset of puberty. Though some traumatic events or hormonal imbalances may cause it to start earlier.”

From a discussion I had with one of my psych teachers about their thoughts on the matter.

I missed a few important bits. The ‘stymieing’ of some choices were because the person was scared to learn about that aspect of themselves. He also said that some choices never present themselves to some people, while others may be intricately tied to one another.
The most important part is that about 95% of the whole process is subconscious.