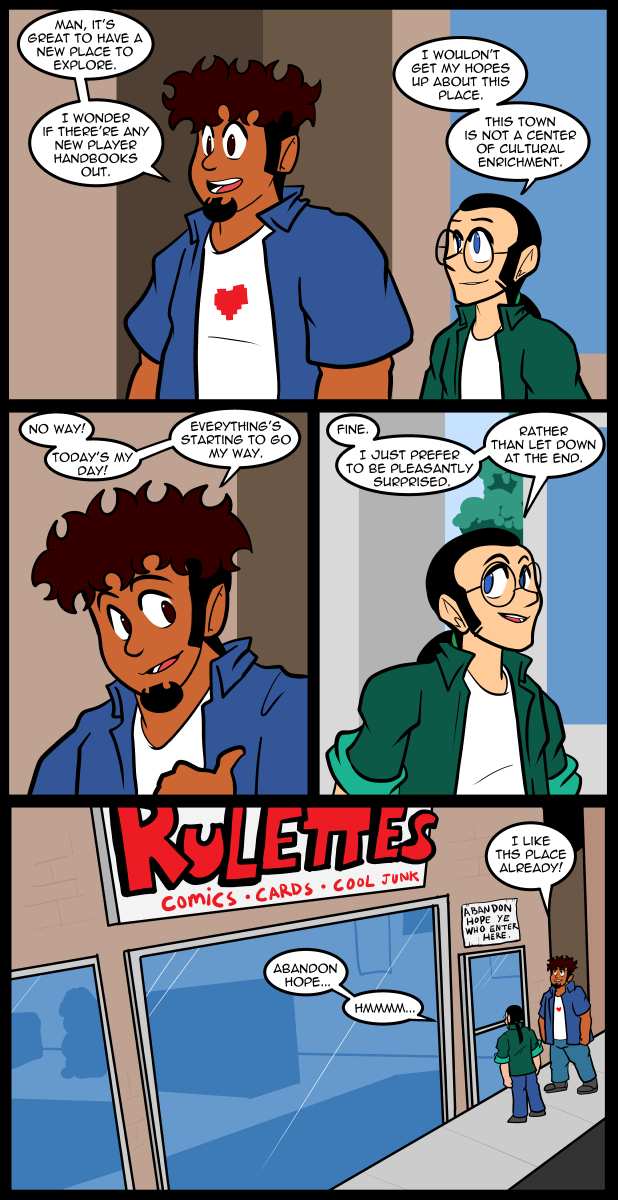 Rulette’s is basically another comic idea I had way back that I could never find time to make. So, much like I did with Alex, I decided to just roll it in to this one and use it to further the story I already have going rather than making up a bunch of new characters. The problem is that she’s another girl in a world that already had a lot of strong women in it. Well, maybe not the “problem”. More like, I’m worried things might get imbalanced. It’s probably not worth worrying about, and I don’t really have time to anyway, so I’m doing it regardless. But the worry exists in the static of my mind. It’s there. Better to just trust in myself and let things happen though. That seems to work a lot better than worrying in the long run.
The other day, when I went to the doctor, the nurse who took my information asked me what I was playing when she noticed me handing my 3DS off to my mother. I told her, and she started telling me all about her D&D group, what games she liked, and so on. I couldn’t respond properly because she was taking my blood pressure and I didn’t want to fuck up the reading, and she’d also insulted me casually, without realizing it. The result was that instead of actually talking to another human being, who I shared interests with, I basically sat there mumbling short responses. Of course even if I’d been able to talk I can’t drive an hour to do anything for very long, so it would have been ultimately pointless, but it still felt like a missed opportunity. The fact that an actual group exists in a small Colorado town was surprising. I don’t begin to know how they found each other. I guess through the same means most normal people do that I don’t enjoy in any way.
I just don’t fit very well with other people. Even ones that I have a few shared interests. I’m not sure what deficiency I have, but at this point the problem has to be with me. I am just enough like my father to hate just enough of everything other people like to alienate them, while being enough like my mother to still want to be around people sometimes. It is a frustrating and terrible existence sometimes. On the other hand, I’m usually capable of entertaining myself for long enough that it doesn’t matter. This is just the weird reality of my life.
It looks like a thunderstorm is going to pass over us in the next hour or so. I will have a very small window to get to town and get enough water to get us by for a few more days. I can use the Teen’s car, which has some air conditioning, although I fucking hate driving small cars that are low to the ground. I feel like I can’t see all of the road. I haven’t slept properly in three days though. A constant stream of interruptions have kept me from doing more than dozing off for a few minutes at a time. It’s a recipe for disaster. If I run out of water it will be disastrous too, so it’s a catch 22. My room is getting very cold, so the temperature must be dropping outside. It’s going to be a close race no matter how you look at it. I’ll probably be getting water when the comic goes live. The storm is here right now…
I’ll tweet when I get back home in case you guys are worried. XD

Glad to see you made it back alive …

Man, Mike is filled with DETERMINATION.

I don’t know how many people are going to do that “joke”, but I don’t care, I had to do it!

Dude, Undertale was huge, so… yeah. I’m pretty sure a lot of people’ll get that joke. ;)

Ah comic book shops. A home of your closest friends, or bitterest enemies.

Comic Book shops, those still exist? [Kidding]
Pretty much every shop I knew as a kid and through into adulthood [maturity not included] is gone due to one reason or another.
The three shops I know of are radically different from days gone by. All but one [SilverSnail] are much smaller than they were and all sell a whole lot of other stuff [CCGs mostly] but very few comics. Even the gaming materials are limited to nonexistent compared to the racks upon racks of modules and supplements in years gone by. It all can be summed up by Big Corporate damn near killed the hobby with their scorched earth policies.

Game supplements? I suspect there are enough inspired amateurs posting their stuff online that the companies are having a hard time competing.

Mike will be pleased today. Or someone will pay!

A few folks have mentioned Comic Shops today. I’m starting to think the Government is trying to make them illegal, like it’s doing with Gun Shops. So remember, when comics are outlawed…

*Puts a FF13 sticker of Hope up by the door.

“Expect the worst, and when something good happens, you can be pleasantly surprised.”

Comic shops: one good one where I live, with a few other smaller ones that go for a niche market.

D&D groups: the bad groups I’ve been in were all formed from people I met in school. The good groups have all been formed by people I meet online or through family. Favorite group I ever played in was one that tested modules before they were sold. So much fun playing, we would stretch the rules as far as we could to see how the module could take it, while also doing our best to keep a super diverse group alive. DM would always be the guy who wrote the module, and we almost never had a dedicated healer. So many deaths. So many new characters. So many mummy or lich versions of old characters because we really didn’t want to write up a new one.

Are there any Russians in Rulettes?

Heh, heh! I’m Russian away from that game.

Now, don’t go off half-cocked (we appear to be locked in this chamber, so there is no safety anyway … ;-)

Did you notice the missing “i” in the last panel? It says, “I like ths place already.”